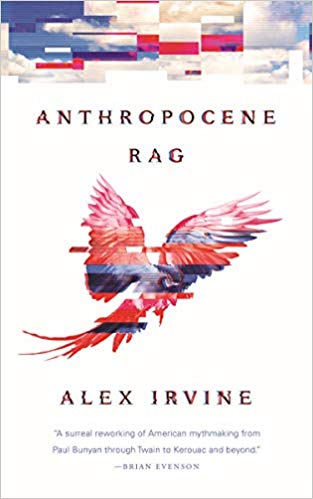 In the future United States, our own history has faded into myth and traveling across the country means navigating wastelands and ever-changing landscapes.

The country teems with monsters and artificial intelligences try to unpack their own becoming by recreating myths and legends of their human creators. Prospector Ed, an emergent AI who wants to understand the people who made him, assembles a ragtag team to reach the mythical Monument City.

In this nanotech Western, Alex Irvine infuses American mythmaking with terrifying questions about the future and who we will become.

The closest that I can come is that this is a “road” story, much in the same way that American Gods is a road story. But instead of the world’s mythology holding it all together, in Anthropocene Rag what’s holding the world together – for extremely loose definitions of together – is an amalgamation of American history, story and Boom particles.

It’s a bit as if the road trip in American Gods took place in a post-apocalyptic world, where the apocalypse was the slamming together of our original timeline and one in which magic and monsters work. Kind of like the worlds of Kai Gracen and Heartstrikers.

All wrapped up in a bow made out of Willy Wonka’s chocolate in the colors of the Yellow Brick Road. But the “man behind the curtain” in this scenario is P.T. Barnum and not the Wizard of Oz – or anywhere else.

Or is it all something else? Is it Data, wanting to be human? Or a thought experiment by a sentient AI, desperate to learn what life is all about?

Perhaps it’s all of the above. At least in one of its infinite iterations.

Escape Rating B: At first, Anthropocene Rag feels more like a road story than anything else. While the instigating event is clearly a callback to Willy Wonka, the journey that is undertaken by the six recipients – and one thief – of the Golden Tickets goes through times and places that are not on any map, either now or then. They begin their quests for the semi-mythical Monument City from the literal four corners of this post-apocalyptic US, this land created by the Boom, a Boomerica where all the myths and legends and histories and tales that make up the identity of these theoretically United States are all true, and all occurring simultaneously, no matter how disorienting that might be to the travelers in order to finally converge in a place that no one believes is real – even when they are standing right in front of it.

Along the way they traverse places that have become entirely creations of the Boom, like Reno, and places where life isn’t all that much different than it is now. Or at least than it was before the current pandemic.

But the characters in the story aren’t so much characters as they are a combination of tour guide and archetype, leading the reader on a journey of discovery. Not their discoveries, although they do make them, but the purpose of these individuals is to teach the emerging sentient A.I. about what it means to be, not so much to be human as Data desired, but to be self-aware.

It’s fascinating, but more as an experiment than as a story in and of itself. I think that a lot of readers will probably bounce off of it, but it is worth sticking with to see exactly what spider is at the heart of this nanotech web.

And there’s a lesson in the end that is even more apropos now than it was when the author penned it. “In a disaster, life goes on.”