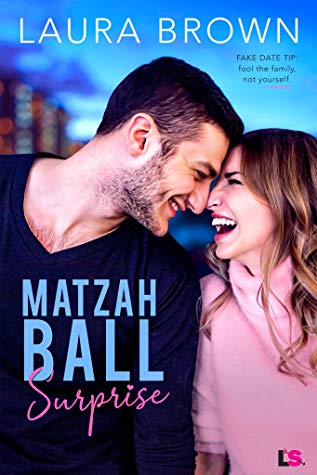 This Passover is starting to feel like the ten plagues might be coming back to haunt them before the weekend is over...one hilarious misstep after the next.

Gaby Fineberg just wants to get through Passover Seder without her “well meaning” family playing matchmaker. She needs a date, just for one simple meal - that includes singing, the history of her forefathers, and not one bit of yeast. The hot guy at her gym would be perfect. He probably hates bread, anyway, with a body like that. But when she finally works up the nerve to ask him...he doesn’t hear a word she said.

Levi Miller is deaf and happily single. Initially, he doesn’t know why this beautiful woman is talking to him, but it’s clear she needs help - and suddenly so does he. In a very complicated situation, Levi finds a simple solution. Gaby will pretend to be his new girlfriend to bail him out, and he’ll return the favor. But he didn’t bargain for a family dinner quite like this one...

Passover starts this evening, which is why this review is scheduled for today. I’d say to just call me Captain Obvious, but a romance wrapped around one of the Jewish holidays isn’t all that obvious at all – or all that common – so I wanted to celebrate that this story exists at the time when it seemed the most germane. Especially since it’s a light and fun romance that is just perfect for this holiday season.

The story in Matzah Ball Surprise is a lovely little romance that combines the ever popular “fake boyfriend” trope with a little bit of insight into living with a disability (the hero is deaf), the celebration of one of the major Jewish holidays and the trials and tribulations that revolve around a large family gathering, particularly a family gathering that occurs in the wake of a family tragedy.

It’s also a story that feels a bit nostalgic right now, as most of us are remembering other holidays with family and friends and wondering how this holiday season (Easter is this coming Sunday) will be when we are all sheltering in place and away from the people we would normally travel to see.

But Gaby Fine is definitely of two minds – if not more – about her imminent trip back home to spend Passover with her family. Because reasons. Lots and lots and LOTS of reasons.

In her early 30s, Gaby is newly unattached after her recent breakup with her latest boyfriend. Tom was basically a judgmental asshole who did his best to ridicule everything Gaby said and did. His whole purpose in the relationship was to sap her self-esteem, and he did an unfortunately good job of it.

But that means that her mother, and the rest of her family, will spend the holidays making extremely unsubtle digs at her unattached state – especially as mom seems to have liked the asshole and blames Gaby for the breakup. Anyone who has ever shown up to a wedding or family function under these circumstances will know all too well just how constant the digs are and how terrible they make a person feel.

So Gaby, with the encouragement of her friend Riley, cooks up the idea of taking a fake date to Passover. When she gets up the nerve to ask the hottie at the gym she’s been eyeing up for months, she’s flummoxed when he tells her that he is deaf, astonished that he agrees, and bowled over by the fact that her need for a fake date meshes with his need to get his pushy ex out of his life and space.

Gaby and Levi Miller come to a mutual accord over an intense round of in-person texting. He’ll come to Passover with her, for two days in Connecticut, giving him the perfect excuse for avoiding his own family gathering that weekend in Maine.

She gets her mother off her back, and he gets the space for his ex-fiance to finally admit to both their parents that their relationship is over.

Of course, nothing is remotely that simple, and neither situation was exactly all that simple to begin with. Because neither Levi nor Gaby expected to fall in love with their “fake date”. And Levi didn’t expect the house of cards he was holding up to collapse in the middle – and all around the edges. And break both of their hearts.

Escape Rating B: For the most part, I really, really liked Matzah Ball Surprise. Especially because I was certainly surprised to see a mainstream romance that was wrapped this much around Jewish holidays and Jewish culture. I really liked Gaby and Levi as characters, and loved watching their relationship blossom.

As much as Gaby’s mother reminded me of my own, and as much as that drove me crazy, I could understand EXACTLY where Gaby was coming from about that whole side of the equation. I don’t have quite the need that Gaby does for things to stay in place, but the unrelenting familial pressure – been there, done that, still have some of the emotional scars.

The struggle that Levi and Gaby went through just to communicate felt like it was right on target. It’s not something I would know but the author certainly would as she herself is hard of hearing and many of her previous books feature characters who face similar challenges to Levi, so she knows whereof she speaks – or writes.

But there was one part of this story that didn’t work for me, and it was enough of an issue that it keeps the story from being an A or even A-. A reason that is wrapped up in all the secrets that Levi is keeping, and the reasons for those secrets.

Levi’s stuck in the middle of a small problem that he makes into a huge dilemma, at least as far as Gaby is concerned. He broke up with his fiance, Monica, but she is sorta/kinda blackmailing him into not revealing that they broke up to their parents because she is trying to get a business loan from her dad and he doesn’t trust her. Multiple problems on that front, because she’s not trustworthy in the truth-telling sense, and hasn’t gone into detail about her business plans, which might actually be trustworthy.

And Monica comes off as a manipulative bitch – only because she is.

Levi promised her he wouldn’t tell ANYONE, which means he appears to be an engaged man cheating on his fiance with Gaby. Or, at least it sure looks that way, especially when their fake date starts to turn real, and he STILL doesn’t reveal what’s going on.

That whole piece of the puzzle felt like one giant, contrived drama-llama. It didn’t seem like a big enough secret to keep under the circumstances – and probably one he shouldn’t have promised in the first place. So the revelation of his lie was appropriately devastating, but the lie itself seemed like small potatoes that should never have been baked in the first place. I’m mixing metaphors but the lie didn’t make enough sense to become that big of a deal.

So come to the seder. Drink the wine and stick around for the family drama. The couple are a terrific match, the romance is lovely, and there aren’t too many bitter herbs mixed into the charoset.