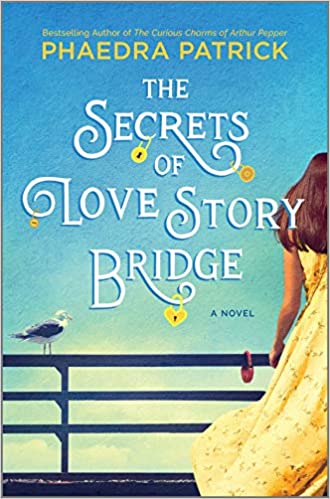 It’s summer in the city and passions are soaring along with the temperature—for everyone but Mitchell Fisher, who hates all things romance. He relishes his job cutting off the padlocks that couples fasten to the famous “love story” bridge. Only his young daughter, Poppy, knows that behind his prickly veneer, Mitchell still grieves the loss of her mother.

Then one hot day, everything changes when Mitchell courageously rescues a woman who falls from the bridge into the river. He’s surprised to feel an unexpected connection to her, but she disappears before he can ask her name. Desperate to find out her identity, Mitchell is shocked to learn she’s been missing for almost a year. He teams up with her spirited sister, Liza, on a quest to find her again. However, she’s left only one clue behind—a message on the padlock she hung on the bridge.

Brimming with Phaedra Patrick’s signature charm and a sparkling cast of characters, The Secrets of Love Story Bridge follows one man’s journey to unlock his heart and discover new beginnings in the unlikeliest places.

On the other hand, the fanciful, ultra-modern, slightly fantastical bridge that lies at the heart of so much of the heartbreak in Mitchell’s past sounds exactly like the Samuel Beckett Bridge (pictured below), which we walked across every day while we were in Dublin. 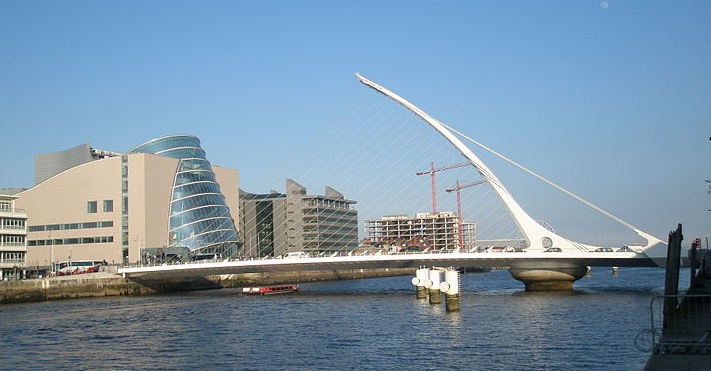 Mitchell’s story is a story about bridges. Not so much about designing them, as he did when he was a practicing architect, or about denuding them of illicitly placed locks, as he is doing when the story opens.

(Not that the denuding doesn’t need to be done. As romantic as the love lock concept sounds, it’s actually dangerous to the bridges. Padlocks are heavy. Lots and lots and lots of locks all together are VERY heavy. If the bridge wasn’t designed to bear the extra weight – eventually it won’t – with disastrous results.)

But the bridges in this story are the kind of bridges that span the distance between yesterday and tomorrow. Between the past and the present, Between a father and his daughter, both grieving the loss of their partner/mother in their own – unfortunately completely antithetical – ways.

And most especially, the bridge between clinging to the hurts of the past and searching for a brighter future.

Escape Rating B: This is a story that rewards patience. There’s a point in this story, just about at the halfway point, where a switch flips and it shifts from being a bit of a downer to a story where it’s not just that things are finally happening, and Mitchell is shaken out of his rut, but where things actually look up and get brighter.

Which does happen because Mitchell gets shaken out of his rut when he leaps over that bridge in pursuit of the mysterious woman who fell off – a mystery that seems to deepen as Mitchell learns more about her. In the process he learns more about himself, or finds the road back from the slough of despond he’s been wallowing in for the past three years, or both.

Once his daughter’s music teacher, Liza Bradfield, reveals that the woman he rescued is her sister, a sister who has been missing for the past year, his carefully planned and somewhat stale life moves, awkwardly at first, into Liza’s more colorful and much more spontaneous world.

At first the endless circling of his thoughts tries to drag him back into his safe but sterile existence, only for him to be taken by the hand by his daughter Poppy and pulled into the world that she wants to inhabit. A world with friends and fun and definitely with Liza.

But it takes Mitchell about half the book to start climbing out of that rut, and it’s a bit dark and gloomy down there. The story only begins to shine when Mitchell starts letting things happen instead of trying to plan them to death – and he’s all the better for it. So is Poppy. So is the story.

The second half of this book really sings, as Mitchell starts to shake himself loose, finally lets himself grieve and move forward (the catharsis is much needed) and gets himself involved not just with Liza but with her entire slightly crazy family.

His heart opens, his world expands and sunshine comes back into his life. A big part of that expansion consists of the wave of letter writing inspired by his plunge into the icy river. Those letters let him see just how many people he’s touched – and they touch him in return.

I enjoyed Mitchell’s story, but I really wish we could have seen more of those letters, because the ones we got were a delight – even when Mitchell wasn’t ready to see it.