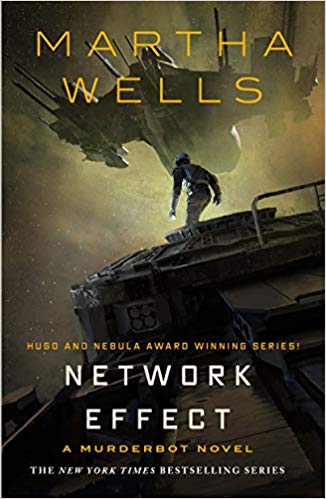 You know that feeling when you’re at work, and you’ve had enough of people, and then the boss walks in with yet another job that needs to be done right this second or the world will end, but all you want to do is go home and binge your favorite shows? And you're a sentient murder machine programmed for destruction? Congratulations, you're Murderbot.

Come for the pew-pew space battles, stay for the most relatable A.I. you’ll read this century.

I’m usually alone in my head, and that’s where 90 plus percent of my problems are.

When Murderbot's human associates (not friends, never friends) are captured and another not-friend from its past requires urgent assistance, Murderbot must choose between inertia and drastic action.

Drastic action it is, then. 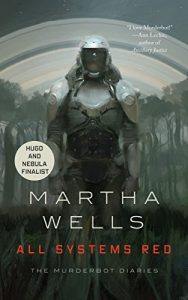 Murderbot is the name it gave itself once it hacked its own governor module and went completely rogue. Except it didn’t. SecUnits like Murderboth are property of one of the many megalomaniacal corporations that run the galaxy, and are more explicitly slaves than the human employees of those corporations. But not more explicitly by much.

It’s only through the events that take place in the first four novellas, All Systems Red, Artificial Condition, Rogue Protocol and Exit Strategy, that Murderbot finds a group of humans who are willing to give it purpose without suppressing its individuality.

Dr. Mensah and her family and colleagues treat Murderbot as another colleague. The messy emotions that engenders within Murderbot make it uncomfortable in the extreme. It finds humans messy and stupid at the best of times. Feelings, its and theirs, are something to be avoided at all costs. Except that they can’t be.

This is a story that turns out to be all about the emotions that Murderbot really doesn’t want to deal with, wrapped around a page-turning adventure. Because the heart of this story is about friendship. Murderbot’s seldom acknowledged friendship for ART, the Asshole Research Transport who helped it learn to blend in better among augmented humans. It’s also about Murderbot’s need to help the people it has designated as its humans, even when they put themselves in danger and drive it crazy.

The story begins when Murderbot and some of its humans are kidnapped by weird gray humanoids who look diseased and talk like cartoon villains. Complete with bwahahas. It middles with Murderbot discovering that his kidnapping (bot-napping?) was orchestrated by his friend ART in ART’s desperate attempt to save not merely itself and its humans, but to also save, quite possibly, humanity itself – although that is just possibly a side effect – or even an unintended consequence. Neither Murderbot nor ART are all that taken with humanity in general, just their own special portion of it.

And it ends with a dramatic rescue attempt that finally gets Murderbot to understand that it is valued for itself and not just for its functions. That’s a frightening revelation for a being who is still rightfully paranoid about its fate if the wrong people ever figure out what it really is.

Something that it is still figuring out for itself. 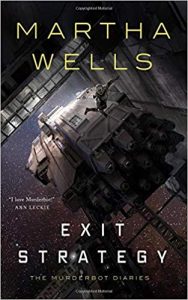 Escape Rating A+: I’ve been waiting for Network Effect for almost two years, and it was well worth the wait. This is one of those reviews where I just want to squee all over the page. This was definitely a one-day read for me. I absolutely could not put it down. At all. Not that I tried very hard.

What makes this series – and each story within it – work so well is Murderbot’s voice. The story is told from Murderbot’s perspective, in its first-person voice. We’re there inside its head, and its an awesomely snarky place to be. While Murderbot does manage to keep itself from blurting out all of the insensitive and insulting things that it’s thinking, it’s thinking them a lot. It says everything in its head that all of us think all the time, try to pretend we’re not thinking, and praying that never actually come out of our mouths. It’s inner thoughts are constantly rude, and its extremely dry sense of humor is on the gallows side.

This series is probably great in audio. First person narratives, when they are done well, and this one is, generally are.

Murderbot is also fascinating because Murderbot is a version of Pinocchio who has zero desire to become a real boy. Or, for that matter, a real girl, a real genderfluid person or, in all honesty, a real human at all. Murderbot just wants its humans to do what it tells them in situations when security is threatened, and to be left alone to watch its really bad SF serial dramas the rest of the time. Part of what makes Murderbot so interesting is that its entire story, its journey, is its search for personhood without any of that personhood being tied to humanity.

While its setting in the stars among abandoned colonies and corporate overlords run amuck reads much like the gameworld in The Outer Worlds, The progress of the story and the journey of its protagonist feels very similar to that of Finder, both in the universe-weary voice of its first-person narrator, and in the “out of the frying pan and into the fire” nature of its plot. Murderbot, like Fergus Ferguson, seems to be an avatar of Murphy. Whatever can go wrong generally does, and then continues right on going. Wrong. And wronger. And every so often wrongest.

And yet, it perseveres, usually while denying it’s in trouble and serving up a heaping helping of snarkitude. That it manages to save, not only its humans but possibly humanity as a whole in the process is just part of its charm. A charm that it would deny it had.

I loved this one so hard I’m having a difficult time conveying just how much I loved it. If you don’t know Murderbot, get All Systems Red and settle in for a terrific binge read. It’s awesome.

Meanwhile, I sincerely hope there will be more Murderbot in the future. Its journey is far from over, and I want to read it.