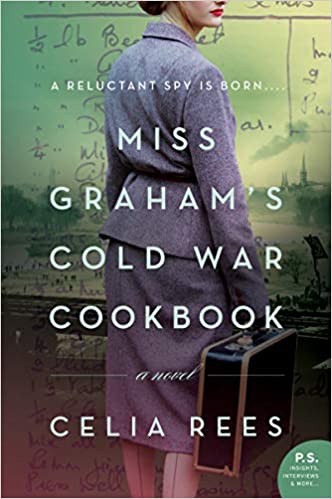 A striking historical novel about an ordinary young British woman sent to uncover a network of spies and war criminals in post-war Germany that will appeal to fans of The Huntress and Transcription.
World War II has just ended, and Britain has established the Control Commission for Germany, which oversees their zone of occupation. The Control Commission hires British civilians to work in Germany, rebuild the shattered nation and prosecute war crimes. Somewhat aimless, bored with her job as a provincial schoolteacher, and unwilling to live with her stuffy genteel parents any longer, twentysomething Edith Graham applies for a job with the Commission—but is instead recruited by the OSS. To them, Edith is perfect spy material…single, ordinary-looking, with a college degree in German. And there’s another thing—the OSS knows that Edith’s brother went to Oxford with one of their most hunted war criminals, Count Kurt von Stabenow, who Edith remembers all too well from before the war.
Intrigued by the challenge, Edith heads to Germany armed with a convincing cover story: she’s an unassuming schoolteacher sent to help resurrect German primary schools. To send information back to her OSS handlers in London, Edith has crafted the perfect alter ego, cookbook author Stella Snelling, who writes a popular magazine cookery column that embeds crucial intelligence within the recipes she collects. But occupied Germany is awash with other spies, collaborators, and opportunists, and as she’s pulled into their world, Edith soon discovers that no one is what they seem to be. The closer she gets to uncovering von Stabenow’s whereabouts—and the network of German civilians who still support him—the greater the danger.
With a unique, compelling premise, Miss Graham’s Cold War Cookbook is a beautifully crafted and gripping novel about daring, betrayal, and female friendship.

Welcome to the Cold War. The same as the old war. Well, not exactly. But it feels like all the forces that set up – and set off, World War II are ALL still around. Even the ones that shouldn’t be after the defeat of the Nazis.

At the same time, in 1946 Germany, we also see the opening stages of what history calls the Cold War, which was only cold because most of the actual fighting was conducted through proxies.

But in the immediate aftermath of WW2, we see the seeds for the next 30ish years of history, along with a whole lot of dirty deeds done in the name of patriotism – or just plain survival.

On the one hand, Miss Graham’s Cold War Cookbook brings this slice of history to life, as Miss Graham finds herself caught between opposing forces – not all of whom were supposed to even be opposing.

As a British operative for the Control Commission for Germany, she’s there to assist with re-opening schools in Germany – and it’s a job that’s sorely needed. On the other hand, she’s trapped in the middle between Operation Paperclip, run by the U.S. and Operation Surgeon, run by Great Britain. Both agencies were formed with the purpose of whitewashing and using selected Nazi personnel with important skills – most famously Wernher von Braun – and denying those people and those skills to the Soviet Union. Justice for the atrocities committed by the Nazis was only to be served on those who were either too infamous to cover up, like Goebbels and Himmler, or too junior or commonplace to be of any use to the victors.

And there was definitely a third hand, that of the people looking for that justice denied. Both the surviving Jewish agents who had seen what happened for themselves, who had lost friends and family and needed an accounting and to see justice served.

Along with Vera Atkins, the director of the Women’s Section of the Strategic Operations Executive in Britain, who needed to find both closure and justice for the operatives that she personally sent into Occupied France and Nazi Germany. Operatives who were betrayed by someone in her own office. She needs to know who, and why, and how, and make sure they get punished for their treason.

If she can. If Edith Graham, using a code derived by a ubiquitous wartime cookbook, can manage to find the information – and keep it from everyone else who wants to use it – and her.

Escape Rating A: Parts of this story have been told before, as part of the action – the search for the fates of the missing female agents – formed the heart of last year’s The Lost Girls of Paris by Pam Jenoff.

But the story told in Miss Graham’s Cold War Cookbook is both larger, and in the end smaller, than that one. Although they do share a character in Vera Atkins, the real-life head of the Women’s Section of the Special Operations Executive. Atkins was the inspiration for Eleanor Trigg in Lost Girls (and also for Hilda Pierce in Foyle’s War).

Discovering the fate of those lost agents isn’t the only iron that Edith has in the fire in Germany. The bigger story is the one about the so-called “rehabilitation” of the reputations – and definitely not the beliefs – of any Nazis who had skills that could be useful in the coming Cold War. Even as early as 1946, no one in power seemed to have any appetite for bringing the butchers to justice, while everyone was looking to get a leg up on the opposition. Not to mention sniping at each other over the “best” prizes.

Edith is caught in the middle. She sees the conditions in post-war Germany for the hellscape that they have become. She wants to help those who can be helped – especially the children. She refuses to turn a blind eye to the many and varied forms of corruption all around her, not even the ones perpetrated by her own side.

In spite of being nearly 40, Edith has led a relatively sheltered life. She’s well-meaning, but naive to a fault. A fault that everyone around her is more than willing to exploit, from her German lover from before the war to her secretive cousin lurking somewhere in MI6. She may have come to do a job, but she’s there to be used.

But in the process, following Edith as she does her best to save what she can, help who she can, and get justice where she can, we see that the idealized history that we’ve been taught about the postwar reconstruction of Germany was far, far from the dirty deeds done that couldn’t see the light of day.

So Edith’s part of this story is personal – and by pulling in to her focus, we’re compelled to follow her journey to its end. And beyond.