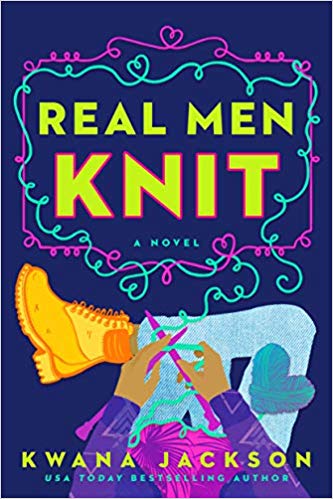 When their foster-turned-adoptive mother suddenly dies, four brothers struggle to keep open the doors of her beloved Harlem knitting shop, while dealing with life and love in Harlem.
Jesse Strong is known for two things: his devotion to his adoptive mom, Mama Joy, and his reputation for breaking hearts in Harlem. When Mama Joy unexpectedly passes away, he and his brothers have different plans on what to do with Strong Knits, their neighborhood knitting store: Jesse wants to keep the store open; his brothers want to shut it down.
Jesse makes an impassioned plea to Kerry Fuller, his childhood friend who has had a crush on him her entire life, to help him figure out how to run the business. Kerry agrees to help him reinvent the store and show him the knitty-gritty of the business, but the more time they spend together, the more the chemistry builds. Kerry, knowing Jesse’s history, doesn’t believe this relationship will exist longer than one can knit one, purl one. But Jesse is determined to prove to her that he can be the man for her—after all, real men knit.

Strong Knits is a mainstay in the small-town-in-a-big-city that is Harlem. And just like any small town, everybody knows everyone else’s business. But this is a community that has just lost one of its beloved pillars, Mama Joy, the owner of the knitting and yarn shop Strong Knits.

The community is reeling from their loss, but so, especially are her four officially adopted sons, Damian, Noah, Lucas and Jesse, as well as her unofficially adopted daughter Kerry. While they may all be technically adults, they all also relied on Mama Joy for love, stability, support (whether financial or emotional) and the occasionally necessary kick in the pants, administered lovingly, whenever she thought it was needed.

The neighborhood relied on her and her store as well. It was a place where a young person could find a piece of calm and support, learn a skill and some discipline, be safe and just be when needed. With cookies and milk. The women found in Mama Joy not just a sympathetic listener but a place where they could set burdens aside for a few minutes in an otherwise all too busy and all too tense life.

It was a haven. And now that Mama Joy is gone, suddenly, taken away by a heart attack, everyone wonders and worries whether and how and even if Strong Knits can continue.

Particularly the Strong brothers. Mama Joy saved them, and they want to save her store, the place where they – and so many other children in the neighborhood – grew up.

But they all have lives of their own now. They may still keep their rooms above the shop, but except for Jesse, they all mostly live elsewhere. Damian near his job on Wall Street, with his mysterious “partner”. Noah on the road as a Broadway dancer. Lucas at the firehouse, as he’s a member of the FDNY. Only Jesse, the youngest, still lives at home.

Because he can’t manage to settle on what he wants to be when he grows up. If that ever happens. So Jesse is mostly a player and only occasionally employed and seems least likely to keep the store going. But he’s surprisingly the one who wants it the most. And has the time to make the attempt.

It’s an attempt with a much closer deadline than he originally planned on. Mama Joy took out a second mortgage on the building. Now that she’s gone, the $100,000 loan has been called in. Not even the bank thinks they have a shot at making this work.

But with the death of Mama Joy, she steps in to help Jesse with the store. Between them, with the support of the community, they have the passion and the energy to make a go of it.

The only problem is that working in such close proximity has them wanting to make a go of each other. Even though Jesse and his brothers have all considered Kerry as untouchable. And especially because Kerry knows that Jesse is a player who loves ‘em and leaves ‘em and never leaves his heart behind. She knows that if she lets him into her heart, he’ll leave it on the floor in pieces.

Escape Rating B+: I mostly loved this book. Not just the way that the community rallies around the store and takes Jesse and Kerry’s attempt to make a go of it to their hearts – although that’s certainly a big plus. Even with just a bit of deus ex machina in the way that this part of the story ends.

Because it’s not just about Kerry’s relationship with Jesse. Even though she and Jesse have been dancing around each other ever since they were teenagers. Kerry’s always known that Jesse was a player, and Kerry had no interest in being played – no matter how much interest she’s had in Jesse over the years.

But the brothers have always seen her as a bit of a little sister. They’re very protective of her, to the point where Kerry is a bit sick of the protectiveness and wants to be seen as the grown-ass woman she actually is.

So a lot of this story felt like it was about Kerry getting her act together, doing her best for the memory of Mama Joy, and figuring out what she wants to do next. She decides that while she’s helping Jesse get the store back on its feet, she’s going to do Jesse. Whatever her heart may want, she knows it’s a short term thing – because Jesse never sticks around.

That he eventually figures out that he wants to, stick around that is, this time is what sets up the actual romance. He’s finally growing up. And that’s a terrific part of the story. But, as much as I wanted this to end in an HEA, I’m not sure that either Kerry or Jesse is ready for that commitment. It felt like we didn’t quite see him do enough of the work to get there. And that Kerry still has plenty of work to do on her own-self as well.

So that HEA that ends the story, while it definitely feels like an HEA for the store and its future, feels a bit more like either a slightly shaky HFN for Kerry and Jesse, or the beginning of working towards an HEA that isn’t quite there yet.

But this was still a fun story and I had a great time with these characters. I found myself wishing that this was the first in a series, and that we’d see all of the Strong brothers find their own HEAs, one romance at a time. I’m REALLY curious about Damian’s mystery person!