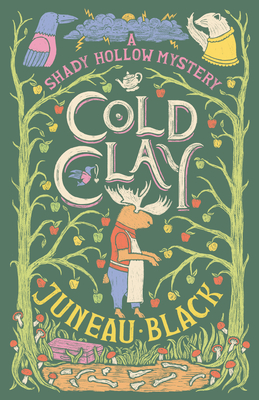 The second book in the Shady Hollow series, in which some long-buried secrets come to light, throwing suspicion on a beloved local denizen.

It's autumn in Shady Hollow, and residents are looking forward to harvest feasts. But then a rabbit discovers a grisly crop: the bones of a moose.
Soon, the owner of Joe's Mug is dragged out of the coffeeshop and questioned by the police about the night his wife walked out of his life--and Shady Hollow--forever. It seems like an open-and-shut case, but dogged reporter Vera Vixen doesn't believe gentle Joe is a killer. She'll do anything to prove his innocence. . .even if it means digging into secrets her neighbors would rather leave buried.
A VINTAGE CRIME/BLACK LIZARD ORIGINAL.

OK, so the Shady Hollow series is ostensibly a story about extremely anthropomorphized animals acting like the standard characters in a small town cozy mystery. In this particular case, the small town is Shady Hollow and the coziness includes more than a bit of fur.

But also more than a bit of quite literal teeth and claws. Even when the victim and/or the perpetrator are not actually equipped with any or all of those accouterments. As it proved in the first book in this series, named for the town where the mystery takes place, Shady Hollow. 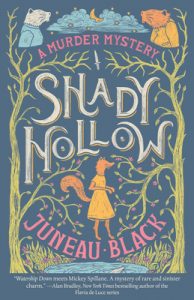 In the first story, two of the village’s less popular residents became what everyone believed were the town’s first murder victims in seemingly ever. The case was all about whittling down the list of who might have done it because motives, at least on the surface, were all too easy to imagine.

This time around, it’s more of a case of intrepid investigative reporter Vera Vixen doing her level best to prove that the obvious suspect isn’t the actual guilty party. Because everybody in town loves Joe Elkins and his coffee shop. Not just because he keeps everyone fed and caffeinated, but because he’s just such a nice person and a pillar of the community in more ways than one.

But Joe has ALL the motives for the murder of his long-missing wife. Everyone thought she left town years ago, unable or unwilling to settle down to small town life running the coffee shop with her spouse and raising their son, Joe, Jr.

The discovery of Julia Elkins skeletal remains in the roots of a fruit tree that wasn’t doing all that well puts Joe in the crosshairs of the police investigation into yet another murder. Joe IS the obvious suspect – not just because it’s ALWAYS the husband (except when it isn’t) – but because Julia was so obviously unhappy, she and Joe were constantly arguing, and someone robbed the coffeeshop just before she disappeared. That’s a LOT of motives.

It doesn’t help Joe’s case that relatively few of Shady Hollow’s residents would even be capable of taking down a full-grown moose!

Vera is certain that the police, in the persons of perpetually fishing Chief Theodore Meade and Vera’s possible beau, Deputy Orville Braun have the wrong person in their sights. And she has every intention of proving that her friend Joe is innocent.

But her boss, the owner of the Shady Hollow Herald, orders Vera to drop her murder investigation in favor of writing fluff pieces about a new business in Shady Hollow that has tempted the veteran newspaper owner with dreams of full-page ad revenues.

New mink-about-town Octavia Grey, with her striking silver coat and her hoity-toity new “School of Etiquette” has all the local gossips twittering. The newspaper wants a piece of that pie, but Vera is sure that there’s something not quite on the up-and-up about the so-called school and its mesmerizing owner. She thinks taking etiquette classes is a waste of time when she should be looking into the latest murder.

It’s only when she digs a bit deeper into both cases that she begins to suspect the two cases might be one and the same!

Escape Rating B: My reading of Cold Clay was a case of how I felt about the book being influenced by my circumstances as I was reading the book. I was stuck in a small airport for 12 hours and I was looking for stories that would take me away – hopefully far away – from where I was sitting at the time. Having read and enjoyed the first book in this series, Shady Hollow, I knew this was a world that I could step into for a couple of hours and just be gone for a bit. (I read a LOT of books that day!)

The world of Shady Hollow reminds me of the movie Zootopia. The characters are basically humans in fur-suits who populate this small town and this cozy mystery with the stock characters we expect in a cozy – just with a little bit extra.

It’s not nearly as twee as you might think it will be – or at least not any more twee than the usual small town with a much higher homicide rate than anyone would think a town that size would be able to support.

Like in many such mysteries, the reader is aware that the long arm of coincidence just isn’t that long. If a new person arrives in town, and an old crime is uncovered, the odds are that the two are somehow connected. And so it proves in Cold Clay.

In other words, I figured out that Octavia Grey had something to do with Julia Elkins’ long-ago murder long before Vera did – even if I didn’t yet have a clue as to how she done it. THAT she done it was pretty obvious.

And it didn’t matter. What makes this series so charming are its people, as is true of most small town cozies. I liked visiting Shady Hollow, and I like the people who live there, fur-suits and all. I went into this story expecting to be charmed and entertained and I was not disappointed in either of those respects. The story did exactly what I wanted it to do – it whisked me away for a couple of hours and that was just fine. 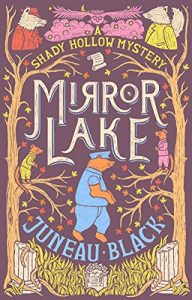 But speaking of expectations, one of the other frequent expectations of cozies is that the investigators, whether professional or amateur, will find some kind of romance along the way, even if that romance is of the on-again, off-again variety. Vera’s relationship with Deputy Orville Braun has been edging in that direction since the first book, to the amusement of MANY of Shady Hollow’s residents.

As difficult a time as I’m having trying NOT to imagine how that could possibly work in the physical aspects, the push-pull dance of wanting to protect vs. needing to prove oneself an equal has more heart than I expected.

I hope they figure it out. It’s one of the things I’ll be looking for in what seems to be the final book in the series, Mirror Lake, next month when it comes out. 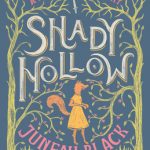