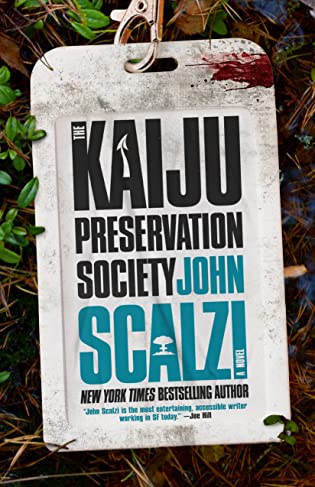 The Kaiju Preservation Society is John Scalzi's first standalone adventure since the conclusion of his New York Times bestselling Interdependency trilogy.
When COVID-19 sweeps through New York City, Jamie Gray is stuck as a dead-end driver for food delivery apps. That is, until Jamie makes a delivery to an old acquaintance, Tom, who works at what he calls "an animal rights organization." Tom's team needs a last-minute grunt to handle things on their next field visit. Jamie, eager to do anything, immediately signs on.
What Tom doesn't tell Jamie is that the animals his team cares for are not here on Earth. Not our Earth, at at least. In an alternate dimension, massive dinosaur-like creatures named Kaiju roam a warm and human-free world. They're the universe's largest and most dangerous panda and they're in trouble.
It's not just the Kaiju Preservation Society that's found its way to the alternate world. Others have, too--and their carelessness could cause millions back on our Earth to die.

It feels like this is the first thing I’ve read that actually deals head-on with life during the COVID pandemic. Plenty of things talk around it, and often those were written about the plague before it ACTUALLY happened, but The Kaiju Preservation Society just slams right into it.

It also feels like this is going to be one of the archetypes for how it gets dealt with in fiction, because this book is just plain damn funny. Even if, or especially because, much of the humor is gallows humor because there was an actual gallows looming over everything as lives, careers, hopes and dreams died with abandon – and sometimes abandonment – during those strange, unreal years.

So it’s entirely fitting that this is a story about giving not just the pandemic but the whole, entire Earth the middle finger and sloping off to a place that no one ever imagined existed. No matter how much we were ALL looking for a complete escape just like this at the time.

With or without Godzilla. Because that’s what a kaiju is, a Godzilla-type monster that occasionally slips between the cracks of the multiverse to terrorize our version of Earth.

But Jamie Gray, who gets fired from his fairly cushy job as an executive for a meal delivery service start up JUST as the country in locking down, then becomes a desperate “deliverator” for the company that fired him, lucks into the experience of a lifetime when his very last customer offers him a job at the mysterious “KPS” because the person on their crew who does heavy lifting is unavailable at the absolutely last minute.

Jamie’s in. He’s been down and out for six months, running through his savings, keeping his best friends from becoming homeless because their jobs have dried up too, and he’s at the end of all his ropes. KPS, whatever and wherever it is, has to be better than what he’s doing now. And the money is fantastic.

So, it turns out, is the experience. 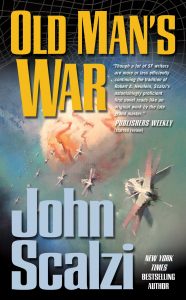 Escape Rating A-: The Kaiju Preservation Society reads like vintage Scalzi of the Old Man’s War and Redshirts variety. The message sneaks up on the reader, much as it does in Old Man’s War, but it’s not quite as deep, while the snark-o-matic is dialed all the way up as it is in Redshirts.

So it’s light if not fluffy and not so much a laugh riot as filled with nerdy jokes, rueful chuckles and occasional outright guffaws from beginning to end. And not dissimilar to the author’s actual voice if one has ever seen him in person. (Scalzi read a bit of KPS on the recent JoCo Cruise and let’s just say that the man doesn’t have to act AT ALL to be the voice of Jamie Gray.)

While the pandemic provides the perfect excuse for Jamie Gray to sign up for a 6 month tour with KPS, as it turns out on Kaiju Earth, it’s his experiences once he steps through the portal in remote, chilly Labrador to the steamy jungle of an alternate Earth where one of the big extinction events just didn’t happen and kaiju evolved to be the apex predator that give the story its heart, its snark and its lesson.

It doesn’t matter how much bigger and more badass the monsters actually are, humans are always the most truly monstrous thing we ever encounter.

But first we get the joy and camaraderie of a whole bunch of very smart, very savvy, very geeky and extremely nerdy people having the absolute time of their lives doing really cool science in this most alien of places that is surprisingly close to home.

The feel of this part of the story, the sheer joy of doing stuff that literally no one has ever done before surrounded by people who are just as into it as you are reminds me a lot of Dan Koboldt’s Domesticating Dragons – and not just for the dragon/kaiju connection. But the love of doing science and breaking new ground and having great colleagues all in it together is very similar, so if you’re looking for another taste of this kind of SF try that.

Yes, there’s a bit of Jurassic Park in this. That’s kind of a “well, duh” comment after all. But the story is a lot more like The Rogue Retrieval (also by Koboldt) and S.M. Stirling’s Conquistador, in that someone with more power than sense, ethics or morals finds a gateway or portal to a place that already exists – and then invades with the hope of conquering it with as much firepower as they can muster.

In all of these portal stories the central problem is kind of the same, in that whenever we humans find someplace new we bring ourselves – which is about the worst thing we could do anywhere to anything. That the author manages to circle that all the way back to the very beginning of this story – all the way back to that start up and the very asshole who fired him was just plain epic. With a heaping helping of utterly marvelous schadenfreude and revenge slathered on top.

And that was just delicious.