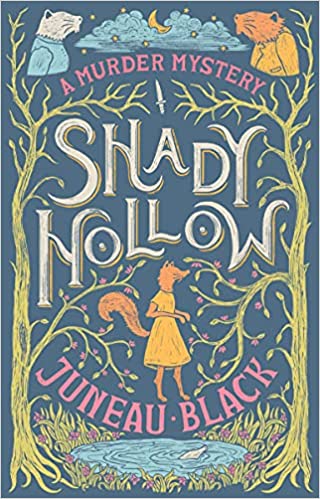 The first book in the Shady Hollow series, in which we are introduced to the village of Shady Hollow, a place where woodland creatures live together in harmony--until a curmudgeonly toad turns up dead and the local reporter has to solve the case.

Reporter Vera Vixen is a relative newcomer to Shady Hollow. The fox has a nose for news, so when she catches wind that the death might be a murder, she resolves to get to the bottom of the case, no matter where it leads. As she stirs up still waters, the fox exposes more than one mystery, and discovers that additional lives are in jeopardy.
Vera finds more to this town than she ever suspected. It seems someone in the Hollow will do anything to keep her from solving the murder, and soon it will take all of Vera's cunning and quickness to crack the case.
A VINTAGE CRIME/BLACK LIZARD ORIGINAL.

Shady Hollow (the book as opposed to the town IN the book) is the kind of story that doesn’t lend itself to the easy description and characterization you think it will. 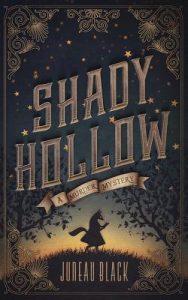 The original U.K. cover (at left) does a bit better job of conveying the darkness that is lurking inside the sleepy little town of Shady Hollow. Because this is the opening book in a series of murder mysteries – admittedly pretty cozy murder mysteries – where all of the characters are VERY anthropomorphized animals.

On her way to work one morning, Vera Vixen, new fox in town, discovers the dead body of Shady Hollow’s least popular resident, the cantankerous toad Otto Sumpf. With a knife in his back.

The toad was such an argumentative old curmudgeon that it’s not all that big a surprise that someone finally got angry enough to kill him.

But there has never been a murder in Shady Hollow that anyone can remember. The police – both bears – aren’t so much stumped as completely out of their depth. Which is where Vera comes in.

So Vera knows how an investigation is supposed to go – even if Deputy Orville Braun is still reading the manual while his boss is off fishing. Again. Perpetually.

When the most prominent citizen in town joins the toad in the town’s temporary morgue – a vacant jail cell, Vera and Orville join forces to find and catch the killer before the creature catches one of them – and adds their body to the pile.

Escape Rating B: I’ve been trying to think of what this book reminds me of, and the closest I initially managed to come was The Constant Rabbit by Jasper Fforde, crossed with an adult version of the Beatrix Potter stories.

At its heart this is still a murder mystery, using those animals-as-people to tell a story that is really about people. Because that’s the perspective all writers have no matter what their characters claim to be.

So, like the Beatrix Potter stories, the author is using animals dressed as humans, doing human things, acting mostly like humans, to talk about what humans do while placing the story at one remove by making all the characters ostensibly animals.

The Constant Rabbit is both closer and further from the mark, as in that story the presence of the anthropomorphized rabbits alongside humans was used as a direct way of talking about shitty human behavior.

It’s possible the closest analogy to Shady Hollow is the movie Zootopia, and I’m a bit embarrassed about how long it took me to get there. And now that I come to think about it, the ending of Zootopia is even a bit of a spoiler for Shady Hollow.

So, we have the animal-citizens of Shady Hollow as the otherwise typical citizens of this cute, cozy and slightly quaint little town. And we have dead bodies piling up, a police chief who is always absent and everyone knows it, an ambitious deputy with no training, a nosy investigative reporter, etc., etc., etc. All fairly standard characters for a cozy mystery. 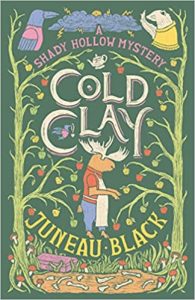 Viewed as creatures, they are adorable and the little touches that remind the reader these are animals draws the reader into the shtick with a smile. But the way the town thinks about itself, the motives for the crime spree, the investigation and most definitely the way that the nosy reporter nearly becomes part of the spree make this a fun, if slightly furry, cozy with just a bit of a twist.

So come for the animals – stay for the mystery. Or the other way around. It’s light, frothy and certainly fluffy either way. I’ll be back to visit Shady Hollow again in the next book in the series, Cold Clay. The amiable local coffee shop owner is about to be caught up in a hotter brew than anything he ever planned to serve. 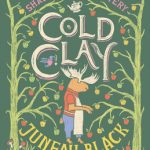 One thought on “Review: Shady Hollow by Juneau Black”