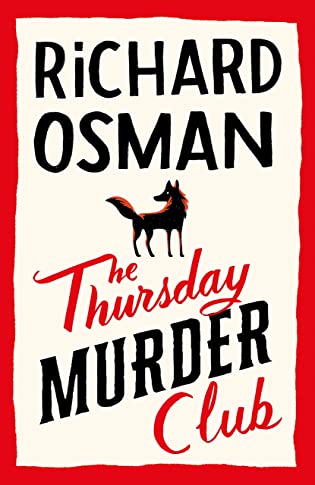 Four septuagenarians with a few tricks up their sleeves
A female cop with her first big case
A brutal murder
Welcome to...
THE THURSDAY MURDER CLUB


In a peaceful retirement village, four unlikely friends meet up once a week to investigate unsolved killings.
But when a local property developer shows up dead, 'The Thursday Murder Club' find themselves in the middle of their first live case.
The four friends, Elizabeth, Joyce, Ibrahim and Ron, might be pushing eighty but they still have a few tricks up their sleeves. Can our unorthodox but brilliant gang catch the killer, before it's too late?

At first, The Thursday Murder Club seemed like an amateur version of the British TV series New Tricks. The title of that series comes from the old cliche about not teaching an old dog new tricks, as the “cops” in that series are all retired, and their job is to solve cold cases. Which occasionally turn rather hot. It’s quirky and it’s fun but it often has a serious tone underneath. Because they can indeed learn when they want to, and their old skills in investigation and detection are still extremely useful.

But as the story goes on, the reader learns that the leader of the Thursday Murder Club probably walked a lot of mean streets in a lot of dark places with Henrietta Lange, the old Cold Warrior in charge at NCIS: Los Angeles. Hetty and Elizabeth would certainly have a lot to talk about, and probably knew a lot of the same people. Elizabeth may be old, but she’s no amateur at looking into dirty deeds done in dark places.

As the story continued, I began to wonder if it wasn’t going to end up somewhere near An Elderly Lady is Up to No Good by Helene Tursten, which is wry and marvelous and certainly lives up to its title. In the end, it sort of does and sort of doesn’t, which hopefully tells you so little that it’s not a spoiler.

There is clearly at least one someone, and probably more, up to no good in and around the luxury retirement village of Cooper’s Chase. While the Thursday Murder Club may have begun by looking at cold cases provided by the retired DCI in their midst, they’ve always wanted to sink their investigative teeth into something new.

That’s just what they have, two fresh corpses – plus a newly discovered body that isn’t fresh at all. Along with the sure and certain knowledge that at least one of their neighbors is a murderer. Possibly even one of the members of the Thursday Murder Club.

Escape Rating A-: This was a lovely, twisty, turny mystery, that I picked up way too early but simply couldn’t put down. We begin by knowing nothing, but we think we know so much. As readers, we make all kinds of assumptions about the members of the Thursday Murder Club, just as PC Donna De Freitas does when she arrives in Cooper’s Chase thinking that she’ll be giving her standard, utterly canned talk to senior citizens about personal security.

Elizabeth and her friends, Joyce, Ibrahim and Ron, are well past any need for that particular lecture. Elizabeth could probably GIVE that lecture in way more depth and with more personal experience than Donna, not that we’re aware of that at the beginning any more than Donna is.

Their little club really just wants to sink their investigative teeth into another cold case to solve, if not to police satisfaction, at least to their own. Donna finds herself involved and even swept away by Elizabeth’s rather implacable charm.

Still, it all seems like fun and games until the owner of their retirement development is found dead in his lavish, garish house with an old photo pinned to his corpse. Not that Ian Ventham will be missed – more like the opposite. But it’s a fresh murder right on their patch and the Thursday Murder Club wants in.

And Elizabeth, who seems to have an endless number of fascinating people owing her favors all over the world, has a way about her. A way that gets Donna assigned to the case, and gets her and her fellow club members a ringside seat to the investigation. And occasionally the other way around.

Ventham was so detested and detestable that at first the entire thing feels like a bit of a lark. The story has all the trappings of a cozy mystery, with its eccentric crew of amateur detectives, the police who are more-or-less willing to go along, and a corpse that no one will miss. Ever.

But then it starts to get its hooks into the reader as the secrets that everyone is desperately hiding begin to ooze into the light. And the bodies start piling up.

Part of the charm of this story, and it is charming, is the way that it shows readers that these seemingly doddering and certainly quirky pensioners are all more than they appear. And that just because they are all old and rightfully worried about what comes next, they are also living very much in the here and now and aware of what powers they still have and what they are still capable of, even as they mourn those people and those capabilities that they have lost.

And that they all have long-past misdeeds that they have yet to atone for. Still, there is compassion in that revelation and in the atonement that follows.

So come for the murders. Stay for the portrait of a group of people that refuse to go gentle into that good night – and who plan to care for each other at every step of the journey. While they dispense their own brand of justice.

One thought on “Review: The Thursday Murder Club by Richard Osman”