Today’s cat picture represents that moment when a sweet kitty cuddle turns into an all-out kitty tussle. Not quite in the blink of an eye, but almost. They looked so adorable laying together, with Freddie as the big spoon and George as the little spoon, but the second I got my iPad into focus, the claws came out. Literally. George likes to pose for the camera but Freddie is more than a bit camera-shy, and this time he took it out on poor George – who admittedly gave as good as he got. The days when the big cats had to pull their punches to play with the little one are long past. 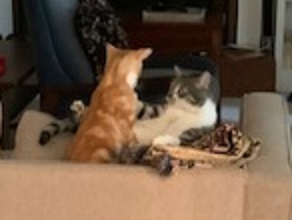 This week was another week where the reality of “safer at home”, along with the signature weirdness of this year dropped by for a couple of visits. Last weekend would have been when we were supposed to be in New Zealand for Worldcon, and this week the American Library Association announced that the Midwinter Conference, scheduled for late January in Indianapolis, had officially been moved to an all-virtual conference. This is absolutely necessary with the current state of affairs. And it absolutely sucks. 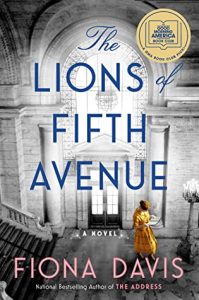 A- Review: Search the Dark by Charles Todd
Return to Learn Giveaway Hop
A Review: The Care and Feeding of Waspish Widows by Olivia Waite
A Review: The Lions of Fifth Avenue by Fiona Davis
B+ Review: Would I Lie to the Duke by Eva Leigh
Stacking the Shelves (404) 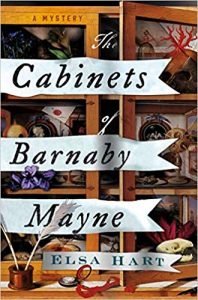