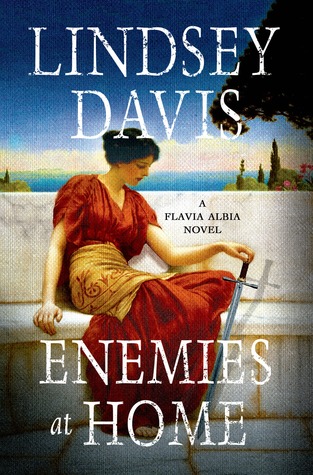 “There are rules for private informers accepting a new case. Never take on clients who cannot pay you. Never do favours for friends. Don’t work with relatives. If, like me, you are a woman, keep clear of men you find attractive.
“Will I never learn?”

In Ancient Rome, the number of slaves was far greater than that of free citizens. As a result, often the people Romans feared most were the “enemies at home,” the slaves under their own roofs. Because of this, Roman law decreed that if the head of a household was murdered at home, and the culprit wasn’t quickly discovered, his slaves—all of them, guilty or not—were presumed responsible and were put to death. Without exception.
When a couple is found dead in their own bedroom and their house burglarized, some of their household slaves know what is about to happen to them.  They flee to the Temple of Ceres, which by tradition is respected as a haven for refugees. This is where Flavia Albia comes in. The authorities, under pressure from all sides, need a solution. Albia, a private informer just like her father, Marcus Didius Falco, is asked to solve the murders, in this mystery from Lindsey Davis.

The past is another country, they do things differently there – or so the saying goes. 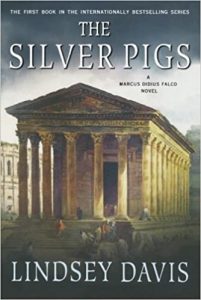 In my reading of this particular book, the saying can be interpreted more than one way. The Flavia Albia series is set in Imperial Rome in the year 89 AD, during the reign of the emperor Domitian. And I first encountered Flavia, or at least her adopted father Marcus Didius Falco, in the first book in his series, The Silver Pigs, 30 years ago, at a time when I had a one hour plus commute to and from work each day, and good, unabridged audiobooks were still pretty thin on the ground. Falco’s world-weary voice made a long journey shorter and considerably more entertaining.

I welcomed Flavia Albia back into my reading life with all the enthusiasm of greeting a long-lost and much-missed friend. After all, she is a chip off the disreputable old block in all the best ways!

Both Flavia and Falco were private informers and inquiry agents, in other words, private detectives, in an imperial Rome that for all of historical trappings feels a lot more contemporary than most readers probably expected. One of the things that this author does so well is to emphasize the things that we have in common, rather than the details that differentiate that time from our own.

After all, Flavia and Falco are both paid to investigate wandering spouses and uncover criminal activity. While technology has changed a lot in the intervening millennia, it’s not difficult to get caught up in the writer’s interpretation that human nature hasn’t changed much, if at all, in that same period – if ever.

But the setting does play its part. In this case, Flavia is hired by an up-and-coming official that she’s worked with before, Tiberius Manlius Faustus, on a case that she has to break all of her own rules to take – and almost immediately wishes that she hadn’t.

Faustus has hired Albia to determine which, if any, of the slaves from the household of burgled and murdered newlyweds were culpable in the crime. If she can’t determine that some of them neither participated in the murder, nor the theft, nor sat back and allowed it all to happen while they stood idly by, they’ll all be killed in the Coliseum – as public fodder for the beasts.

It’s clear from her initial interviews of the potential subjects that they are all hiding something. The question that Albia has to figure out is whether they’re merely covering up a bit of spiteful backbiting and petty thievery, or whether they are responsible for theft of a staggering – in more ways than one – amount of silver serving ware and the murder of their masters.

Albia finds herself caught between the officials who want a quick solution, a criminal gang unwilling to take responsibility for a job they didn’t do, her own meddling uncles, neighbors who seem to have seen nothing and heard less, and a group of people who seem to be lying at every turn.

Just as she decides that this is one case that she’s never going to solve, there’s another body. A body that can’t be laid at the feet of the original suspects, as Albia was interviewing them all at the time!

Once the case breaks wide open, with Albia squarely on the scene this time, she finally has a chance to figure out what really happened the first time around. Before anyone else winds up dead – justly or not.

Escape Rating A-: Slipping back into Albia’s world was like slipping into a warm bath or under a comfy blanket – in spite of the story being just chock full of lying witnesses, murder suspects and dead bodies. Mystery is a comfort read because it’s the romance of justice. More or less. It may start with a dead body, whether much lamented or completely unlamented, but it ends with good triumphing, or at least normal order prevailing, while evil, or at least misguided criminals, receive their just desserts.

There are two things that make this series, as well as its predecessor featuring Albia’s father Falco.

One is the first-person, cynical, sometimes world-weary voice of the protagonist. Admittedly, Falco was a bit more world-weary than Albia, but by the end of his series in Nemesis he was a bit older than Albia is here. Not that Albia is a newbie in either her work or her life, as this story opens she is 29, a widow with no children, and has been working in her father’s old profession for a number of years.

She’s had plenty of time and experience to observe human behavior in all its ugliness to earn the wry cynicism in her perspective. Also, her world is a bit darker than her father’s and not just because there are more obstacles in her way as a woman doing a man’s job, or any job at all. The Emperor Vespasian, who Falco worked under and occasionally worked for, was a much different man than Domitian, the emperor of Albia’s time.

For one thing, Vespasian was a soldier, a realist, and generally not insane. A condition that Domitian is heading towards by this point in history. Falco had friends in high places when he was a private informer, while during Albia’s time no one would want to have friends in those same places if they had any sense. Which she certainly does.

The other thing that makes this series work is the way that the author brings the commonalities of life in Imperial Rome to life. It’s a big, complicated city, a center of government, a hive of activity. And in the complexities of life in a major metropolis, we see that some things are the same. People gossip about their neighbors. Divorces are more often acrimonious than friendly. Some people rub other people the wrong way. Life in a big city is portrayed as not all that different once you get past 20th or 21st century technology. 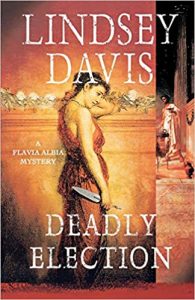 Even though Albia doesn’t have contemporary forensics to help her solve this case, the things she does have to work with haven’t changed all that much. She has to examine the crime scene, interview the witnesses, interrogate the suspects, establish a timeline, pull together the evidence she does have and determine who is innocent and who is guilty.

And we get vicarious pleasure in watching her do so, as well as observing the tentative steps she takes towards a relationship with Manlius. Something that we’ll see develop in later books in the series. I’m looking forward to Albia’s next case, Deadly Election, the next time I need to see someone receive their just desserts!

Review: Running in the Dark by Regan Summers
Dearly, Departed 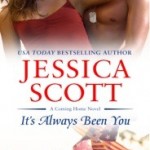 Review: It’s Always Been You by Jessica Scott + Giveaway