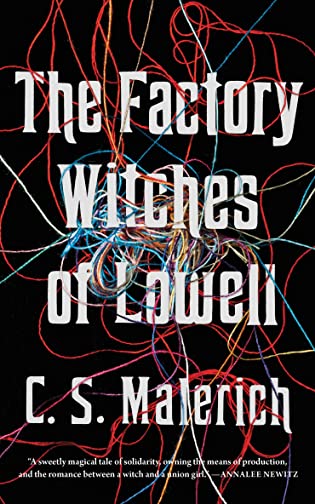 C. S. Malerich's The Factory Witches of Lowell is a riveting historical fantasy about witches going on strike in the historical mill-town of Lowell, Massachusetts.
Faced with abominable working conditions, unsympathetic owners, and hard-hearted managers, the mill girls of Lowell have had enough. They're going on strike, and they have a secret weapon on their side: a little witchcraft to ensure that no one leaves the picket line.
For the young women of Lowell, Massachusetts, freedom means fair wages for fair work, decent room and board, and a chance to escape the cotton mills before lint stops up their lungs. When the Boston owners decide to raise the workers’ rent, the girls go on strike. Their ringleader is Judith Whittier, a newcomer to Lowell but not to class warfare. Judith has already seen one strike fold and she doesn’t intend to see it again. Fortunately Hannah, her best friend in the boardinghouse—and maybe first love?—has a gift for the dying art of witchcraft.
At the Publisher's request, this title is being sold without Digital Rights Management Software (DRM) applied.

This is a story about a group of women who grab their own agency, take back their own power and harness their own magic.

The “mill girls” of Lowell, their lives and working conditions, make an interesting story to begin with, even before adding in witchcraft.

Not that the real women who worked in the mills weren’t called unnatural, as well as witches and bitches every single time they went on strike, or as it was called then, a “turn out”. Because these women, mostly young, were able to live away from their families, earn their own wages and save their own money by working in the mills.

At the same time, as is detailed in this story, the conditions really were brutal. The work days started early, ended late, the windows were closed winter and summer, the noise was “infernal” and their leisure time was both limited in duration and ringed round with conditions about where they could go, what they could do, how long they could be away.

It was still freedom – of a sort. More freedom than they would have in the homes they came from for many of them.

It was also, as the residents of many a “company town” discovered, a chain that was difficult to break, as the company they worked for controlled the wages they were paid AND the cost of their food and lodging. As this story begins, and as occurred in real history in 1836, the company could squeeze its workers between the rock of their wages and the hard place of their living expenses at any time and seemingly without recourse.

The recourse that the female mill workers in the story take is the same one that the real mill workers took in the fall of 1836. They went on strike.

The striking workers in this story had a weapon that their real-life historical sisters did not. They had witchcraft. They had the power to make their strike into a magically binding pact. And they had the leadership to make that binding so strong that even the mills bent to their will.

Not just figuratively by giving in, but literally. By magic. And by the power of love.

Escape Rating A-:This was lovely and surprisingly charming, even though the conditions under which the “mill girls” worked were anything but.

What made this story “sing” was the way that the magic of witchcraft, which is always considered to be “women’s magic” and therefore “less than”, wraps itself around the bones of the history like the weft of the women’s work wrapped around the warp of the looms.

And then there’s the character of Judith, and her love for Hannah. In a way, everything Judith does is about her love for Hannah. And they weave together as well. Because Judith is the leader and the organizer. She is the driving force behind the strike and the union and the witchcraft. And yet, it’s not her power. Judith has no “craft” of her own. The craft is Hannah’s. It’s only together that they can achieve the impossible, holding the strike – and saving Hannah’s life.

Their love, and their desire to save each other is the grace note that makes this story just rise.

One of the marvelous things about this story is that it is complete in and of itself, in spite of its relatively short length. Not that I wouldn’t love to know about what happened to all of them, particularly Judith and Hannah. But I don’t have to know to feel satisfied. They lived, they loved, and even if they spent the rest of their lives together fighting the long defeat against the powerful mill owners, it’s clear from the end of the story that there will be plenty of joy for them in that fight.

This is a story that doesn’t have a happy ending. Rather, it ends in a kind of “happy for now”. The Factory Girls Union of Lowell really can’t win the long war against the rich and rapacious “gentlemen” who own the mills. But as the story ends, they have won a big victory, and are firmly resolved to continue the fight. As they did.

As unions continue to do to this day. Unfortunately without the witchcraft – as far as we know.