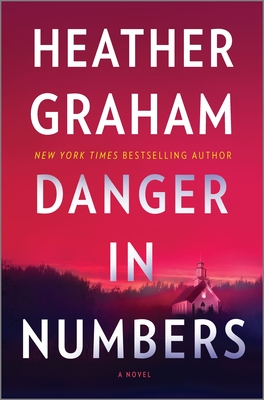 On the edge of the Everglades, an eerie crime scene sets off an investigation that sends two agents deep into a world of corrupted faith, greed and deadly secrets.
A ritualistic murder on the side of a remote road brings in the Florida state police. Special Agent Amy Larson has never seen worse, and there are indications that this killing could be just the beginning. The crime draws the attention of the FBI in the form of Special Agent Hunter Forrest, a man with insider knowledge of how violent cults operate, and a man who might never be able to escape his own past.
The rural community is devastated by the death in their midst, but people know more than they are saying. As Amy and Hunter join forces, every lead takes them further into the twisted beliefs of a dangerous group that will stop at nothing to see their will done.
Doomsday preppers and small-town secrets collide in this sultry, twisty page-turning thriller.

I got sucked into Danger in Numbers from the first page, but there were two things that I admit it took me a while to get. The first was that the story reminded me of something but I couldn’t put my mental finger on exactly what for the longest time. (Surprisingly, it’s Faithless in Death by J.D. Robb. Humans are still screwed up and still falling for stupid stuff even in the future.)

The second was that the title is a play on words. That hit me upside the head somewhere in the middle and just didn’t let go.

Neither did the story.

At first I thought this might be my second serial killer story in a row. Then I realized it was way more gruesome than that. One person, or even two people, who have gone bloodily off the deep end is horrible enough. But the idea of dozens or hundreds being brainwashed into evil by a cult and its charismatic leader – and we know that it does happen in the real – is on a completely other level of insanity.

FBI Special Agent Hunter Forrest rushes from Micanopy in north Florida to the edge of the Everglades – most of the way down Florida the long way – because he’s dead certain that the horrifically dead body that the FDLE (Florida Department of Law Enforcement) has just discovered is related to the murder he’s investigating at his end of the state.

He’s sure because he’s seen it before. Not just because he’s made a career out of investigating cases like this one, but because, once upon a time, he was inspired to join the FBI because of a case much too much like this.

The land around the Everglades is a patchwork of federal, state, private and tribal land. The towns that are near its edge are too small to have much in the way of police forces of their own, and this case is already too big and too sensational for local cops to handle, leaving the FDLE in a slightly uneasy partnership with the FBI to locate and catch the killers.

Because this isn’t the work of an individual or even a gang. It takes an entire town – or an entire cult – to plan and carry out this kind of murder as well as an entire town – or cult – to provide both the reason for it and the means to pull it off and cover up not the crime – because they want that to be found to send a twisted message – but to hide or obscure the identities of the perpetrators.

FDLE Special Agent Amy Larson is going to have to work WITH the FBI whether she – or Forrest – like it or not. Her senior FDLE partner is in the hospital, the murder site is on disputed land, and as good as the FDLE is, the FBI is better.

Larson doesn’t like the feds moving in on the FDLE’s case. Forrest isn’t sure that Larson, still in her 20s and with only four years at the state bureau, is up to the task. And neither of them can resist the pull between them – no matter how much they try.

While the cult – and the man behind it all – is after both of them.

Escape Rating A-: I slipped into this book easily because we spend the story following Hunter and especially Amy. We don’t get into the minds of the cultists, nor is the cult either glorified or sensationalized. We follow Amy and Hunter and their cause is righteous. There’s a lot of understanding on both of their parts but particularly Hunter’s, on how easy it is for people to get sucked in and how practiced the cult leaders are at finding and sucking in the desperate and the easily swayed.

It helps that Amy and Hunter are both interesting characters, who are good at their jobs and keep their focus on the victims at all times. They are in this to help people and it’s easy for the reader to be on their side from the beginning, even as they wonder whether they can manage to be on the same side without friction – of one kind or another.

I liked them both as investigators quite a bit, but I have to say that the romance that develops between them just didn’t feel necessary. I expected it but would have liked the book just as much, or maybe a bit more, without it.

A part of the story that I personally found fascinating was the location in Micanopy. I lived in Alachua County for three years so the area felt familiar. The only thing missing from what I remember of the town is that there was still quite a bit of memorabilia around town from the filming of the movie Doc Hollywood in 1991.

Nevertheless, the familiarity made the location easy to visualize.

While the fact that Hunter and his family had been part of a cult very much like the one they’re tracking felt pretty obvious from the flashback start even though the family was not named, something that took me completely by surprise was just how well the title’s play on words worked in the story.

“Safety in numbers” is a catchphrase that comes up all the time – and it even does in the story as Hunter and Amy and the members of their team try very hard to not work by themselves on this case. The times that Amy is in direct danger are the few times that she is alone.

But there is also a danger in numbers. In this story, it’s the danger of numbers of people big enough to become a cult, or a mob, or the perilous combination of the two that is at the center of the series of ritualistic murders and a whole lot of broken lives and families. Alone, most of these people would have been harmless – or more likely whining complainers or even argumentative blowhards. Even if they had succumbed to their own personal dark sides their crimes would have been, at least in comparison, few and most likely much harder to cover up.

Together they make a self-righteous, self-feeding, murderous mob.

There’s another danger in numbers. Even though it’s clear that the “Divine Leader” will face justice the last page turns, he’s left behind entirely too many true believers who will carry out his mission either for the promise of eternal glory or the filthy lucre of leading a gigantic con. The cult members were following a plan to either court or appease the Four Horsemen of the Apocalypse to bring about the End Times.

As the story ends, the cult is one horse down – and three to go.