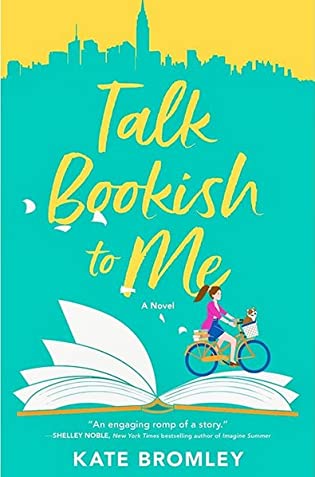 Inspiration can come from the most unlikely—and inconvenient—sources.
Kara Sullivan’s life is full of love—albeit fictional. As a bestselling romance novelist and influential bookstagrammer, she’s fine with getting her happily-ever-after fix between the covers of a book.
But right now? Not only is Kara’s best friend getting married next week—which means big wedding stress—but the deadline for her next novel is looming, and she hasn’t written a single word. The last thing she needs is for her infuriating first love, Ryan Thompson, to suddenly appear in the wedding party. But Ryan’s unexpected arrival sparks a creative awakening in Kara that inspires the steamy historical romance she desperately needs to deliver.
With her wedding duties intensifying, her deadline getting closer by the second and her bills not paying themselves, Kara knows there’s only one way for her to finish her book and to give her characters the ever-after they deserve. But can she embrace the unlikely, ruggedly handsome muse—who pushes every one of her buttons—to save the wedding, her career and, just maybe, write her own happy ending?
"A fun and sexy romp, with chemistry that gave me all the feels!" —Jennifer Probst, New York Times bestselling author of Our Italian Summer
"Add this book to your TBR list immediately!" —Sarah Smith, author of Faker

Romance book tropes are not nearly as much fun to experience in real life as they are between the pages of the best-selling romance novels that Kara Sullivan writes. Or so she discovers when it seems like all of her favorite tropes are happening to her, all at once, when her muse is on strike and she runs into her ex in a meet-not-so-cute at her best friend’s pre-wedding party.

Some of Kara’s favorite tropes are enemies-to-lovers, forced proximity and forbidden love, and she gets all of those and more in this second-chance at love story. Which is, of course, yet another romantic trope.

Now that I think about it, Kara REALLY should have paid more attention to her list of favorite tropes from the very beginning. It would have saved her a lot of heartbreak – but it might have also prevented her chance at her very own HEA.

Not to mention keeping her from missing the deadline to submit her next book!

Escape Rating B: I’m putting the rating in really, really early because I really need to talk about this book and the myriad mixed feelings it gave me. Because there were lots. Bunches. Oodles.

For me, this didn’t read so much as a second chance romance as it did a kind of “unfinished business” romance. Kara and Ryan fell in love in college, and it was one of those stars blazing in the night overwhelming kinds of love that happens when we’re young and not yet jaded and haven’t felt anything quite like it before. It’s that first romance on the cusp of adulthood, when you can imagine spending the rest of your life with this person and you’re old enough for that to be real but you may not be quite mature enough to get through the hard parts.

Kara and Ryan didn’t so much break up as explode while both of them were dealing with terrible situations in their birth families. But it feels like when they broke up they weren’t really done with each other, so when they meet again ten years later, everything that wasn’t resolved back then comes back up now. Unfortunately along with bringing back all the feelings, they regurgitate the bad parts as well.

So Kara’s angst at seeing Ryan again is laid on top of her angst about her next book along with her long held grief and guilt at the sudden death of her father and the arguments they were having at the time he died.

(This was the part that gutted me. My dad also died suddenly, although thankfully not in the midst of us arguing. It’s been almost 30 years now and sometimes the grief still cuts like a knife. I was just so there for Kara that I almost couldn’t go on with the book.)

Also, I don’t know why, but I went into this one thinking that it would be a rom-com. It has all of the witty banter of a rom-com, but as funny as Kara’s and Ryan’s verbal interactions sometimes are, the story at its heart isn’t funny.

Now that I think about it, this might be verging on what some of my bookish friends are calling “sad fluff”. What happened between Kara and Ryan back in college ended sadly, and both of them have been sad about it for pretty much the entire intervening time – at least all of that time when they weren’t still seething with anger.

And what happens in the present, well it ends well. It ends with the chance of happiness. But it doesn’t end with a happy ever after because their relationship still isn’t ready for that. In some ways I’m glad to see a story that is set up as a romance not quite end romantically just because it’s a romance. An HEA at the point Kara and Ryan are at the end wouldn’t feel earned.

But it’s also weird to read a romance that doesn’t end in an HEA or HFN.

Talk Bookish to Me wasn’t quite as bookish as I was expecting, although her portrayal of just how much damn work it is to be a bookstagrammer made me glad that every time I investigated the possibility I backed off. Bookstagram is neat but I’m so much more about the words than about the pictures that I can’t even. So that bit made me perversely happy.

As I said earlier, this one gave me a ton of mixed feelings. Both while reading and after. Your reading mileage may vary but please be advised that emotions in bookish mirror may be closer than they appear.

2 thoughts on “Review: Talk Bookish to Me by Kate Bromley”