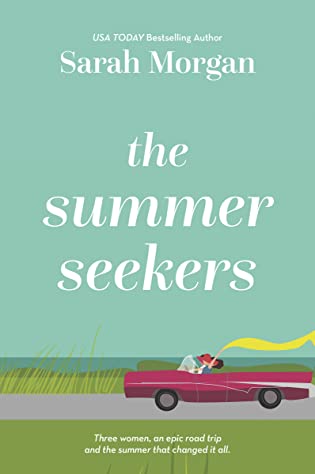 “The ultimate road-trippin’ beach read and just what we all need after the long lockdown.” —Booklist
, STARRED REVIEW


for
THE SUMMER SEEKERS

“The Summer Seekers is the ultimate road trip book.”—Susan Wiggs, #1 New York Times bestselling author
Get swept into a summer of sunshine, soul-searching and shameless matchmaking with this delightfully bighearted road-trip adventure by USA TODAY bestselling author Sarah Morgan!
Kathleen is eighty years old. After she has a run-in with an intruder, her daughter wants her to move into a residential home. But she’s not having any of it. What she craves—what she needs—is adventure.
Liza is drowning in the daily stress of family life. The last thing she needs is her mother jetting off on a wild holiday, making Liza long for a solo summer of her own.
Martha is having a quarter-life crisis. Unemployed, unloved and uninspired, she just can’t get her life together. But she knows something has to change.
When Martha sees Kathleen’s advertisement for a driver and companion to share an epic road trip across America with, she decides this job might be the answer to her prayers. She's not the world's best driver, but anything has to be better than living with her parents. And traveling with a stranger? No problem. Anyway, how much trouble can one eighty-year-old woman be?
As these women embark on the journey of a lifetime, they all discover it's never too late to start over…

It’s pretty clear at the beginning of The Summer Seekers that Liza and her mother Kathleen exist in opposition. Kathleen’s life has been filled with wanderlust, spending most of Liza’s growing up years on the road filming her travel show, titled, just as this book is, The Summer Seekers.

What Liza learned from that experience is that she absolutely did not want that life for herself. She attached herself to home and hearth pretty much as soon as she could. Kathleen craved adventure, leaving Liza to crave the security she never felt she had.

But time has marched on. Kathleen still craves adventure, but at 80 her adventures are not quite as easy to arrange. While 40ish Liza wants above all for her mother, and all of her other loved ones, to be safe. Even though “safe” is the last thing that Kathleen was EVER built for.

There’s that saying about a ship in harbor being safe, but that not being what ships are built for. Kathleen is the ship. Her daughter Liza is the harbor, attempting to keep every ship not just safe but her own definition of safe and worrying so much over every ship – meaning every member of her family and their every need – that she’s worrying herself all the way to a permanent panic attack – if not worse.

And Kathleen and Liza, no matter how much they love each other, manage to just push each other further and further away. Liza wants to keep her mother safe, and she desperately needs to talk about her feelings about her mother’s absences, both physical and emotional, as she was growing up. While Kathleen wants to live the remaining years of her life by wringing out every day until every last drop has been squeezed out – and by never talking about or touching on anything deeply emotional at all.

They are on an emotional collision course when Kathleen announces that she is planning to take the one trip she always intended to but never quite managed. She intends to fly from London to Chicago and take a ride on storied, scenic Route 66. With an unemployed former barista named Martha as her driver, personal assistant and companion.

Liza is practically out of her mind with worry. Because that’s the person she’s become.

But just as Kathleen is about to fly away, just as she did so often during Liza’s childhood, they have one of those moments when they see each other clearly. A moment that puts a shaky bridge across the emotional chasm between them.

And in that moment they throw each other an emotional lifeline. As the miles increase between them, the distance, paradoxically, closes.

But is it too late?

Escape Rating A-: The Summer Seekers begins as Kathleen and Liza are in the midst of a seemingly life-long failure to communicate. Kathleen is emotionally distant – not just with her daughter but with, generally, everyone in her life. Liza, in reaction to her mother’s emotional distance during her childhood, has turned into her mother’s opposite – a woman who has tried to be so present and so involved in the lives of everyone she loves that she does everything for them – and has lost herself in the process.

Into the middle of that gulf steps, or rather drives, Martha. Literally as well as figuratively. Because Martha has the emotional intelligence that both Kathleen and Liza lack. (It’s clearly not in their family DNA!) It’s kind of a surprise that it’s in Martha’s, because her own family can’t seem to appreciate anything she has or is or does – and it’s killing her spirit one hour at a time.

But on this journey, Martha becomes the bridge between Kathleen and Liza. At 25, she’s not quite young enough to be Liza’s daughter, but she’s definitely of an age to be Kathleen’s granddaughter. In the forced intimacy of a very long car trip in a small but fast sports car, they open up to each other in a way that neither has done with their families.

So technology-savvy Martha facilitates the smartphone, email and video chat communication that links Kathleen with her daughter Liza. They share more over the longer distance than they ever have when close.

At the point where the story becomes about Kathleen’s, Liza’s and Martha’s physical and emotional journeys forward and towards each other, it becomes an absolute delight to follow. But the beginning, when Kathleen and Liza are at such cross purposes they are not having the same conversation even when they are in the same conversation, was a painful read for me because it hit much too close to home.

What makes this story is not the physical journey but rather the emotional journey. Martha, with just a bit of Kathleen’s help, learns to listen to the voice inside herself and not all of the naysayers that surround her at home. Kathleen, with a bit of help from Martha’s emotional intelligence, opens up to her daughter about the past Kathleen left behind long ago, and the betrayal that led to the emotional distance that affected both of their lives.

While Liza, with just a bit of prodding from her mother, finally snaps under the weight of all of the worries and obligations that she has buried herself under for so long. In the resounding echo of that snap she drops everything and takes back…herself. She puts herself, her own dreams and her own needs, back near the top of her gigantic to-do list. And every single person in her life is the better for it. Including, most especially Liza.

The “kicks on Route 66” in the Mustang convertible may be the thing that push the story forward, but it’s the emotional journeys that pull very successfully at the reader’s heart.