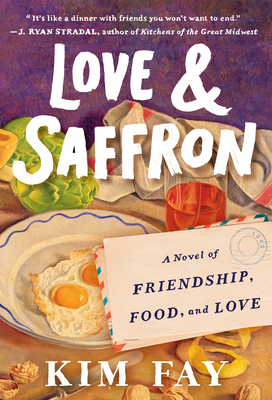 The #1 Indie Next Pick, in the vein of the classic 84, Charing Cross Road and Meet Me at the Museum, this witty and tender novel follows two women in 1960s America as they discover that food really does connect us all, and that friendship and laughter are the best medicine.

When twenty-seven-year-old Joan Bergstrom sends a fan letter--as well as a gift of saffron--to fifty-nine-year-old Imogen Fortier, a life-changing friendship begins. Joan lives in Los Angeles and is just starting out as a writer for the newspaper food pages. Imogen lives on Camano Island outside Seattle, writing a monthly column for a Pacific Northwest magazine, and while she can hunt elk and dig for clams, she's never tasted fresh garlic--exotic fare in the Northwest of the sixties. As the two women commune through their letters, they build a closeness that sustains them through the Cuban Missile Crisis, the assassination of President Kennedy, and the unexpected in their own lives.
Food and a good life--they can't be separated. It is a discovery the women share, not only with each other, but with the men in their lives. Because of her correspondence with Joan, Imogen's decades-long marriage blossoms into something new and exciting, and in turn, Joan learns that true love does not always come in the form we expect it to. Into this beautiful, intimate world comes the ultimate test of Joan and Imogen's friendship--a test that summons their unconditional trust in each other.
A brief respite from our chaotic world, Love & Saffron is a gem of a novel, a reminder that food and friendship are the antidote to most any heartache, and that human connection will always be worth creating.

It’s 1962 and the world is about to change. Neither Joan Bergstrom in LA nor Imogen Fortier on Camano Island (in Puget Sound outside Seattle) have any foreknowledge of what the 60s are going to bring, either to the country or to themselves.

They are both writers, and their correspondence begins when 27-year-old Joan writes a fan letter to 59-year-old Imogen about Imogen’s monthly column in a Seattle-based lifestyle magazine, Northwest Home & Life. Imogen is kind of who and what Joan wants to be when she grows up. Joan is Imogen’s chance to help, befriend, advise and share her soul with a woman living on the cusp of change.

They tell their stories to each other in letters over the next four years as the country grieves through the assassination of JFK and watches the Civil Rights Movement come to life. They mourn together, they hope together, and most importantly for their friendship, they explore the cuisines of the world together even though they’re usually eating more than 1,000 miles apart.

But they begin their friendship, their correspondence, and that delicious sharing with Joan’s first letter. It includes both a recipe and a few, precious strands of saffron to make the flavors come to life. And they do.

Joan is the explorer while Immy supports her and cheers her on. Joan starts out wanting to explore the cuisines of her native Los Angeles, and ends up finding the love of her life. Immy shares Joan’s discoveries, her recipes and her saffron, and discovers whole new facets of her husband of over 40 years. Both of their worlds expand because of their friendship with each other.

It all makes for a beautiful story, a sharing of hearts, minds and perspectives. With an ending that will make even the hardest of hearts shed a tear that it doesn’t last forever. 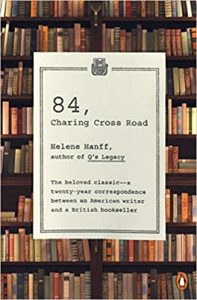 Escape Rating A: This is a bit more Charing Cross Road than Meet Me at the Museum, but it is every bit as marvelous as they are. It’s just that the ending has the bittersweetness of the former more than the hope of the latter. Not that both of those things aren’t part of its story.

I did figure out how this was going to end long before I got there but it honestly didn’t matter. This is one of those stories that are about the journey and not the destination.

More than anything else, what I read was that this journey was all about opening. Joan and Immy begin their journey far apart, in geography, in age, in circumstance. While those gaps aren’t bridged, they cease to matter. Because what they open up to each other are both their minds and their hearts.

They laugh together, they cry together, they share their triumphs, their tragedies, and their innermost thoughts. They inspire and encourage each other to leap and believe that the net will appear – even if the other has to provide that net. It’s impossible not to envy the depth of their friendship.

This is also not a book to read if you’re already hungry. From the very first letter, they share recipes, occasionally actual food and condiments, and encourage each other to explore new tastes and new cuisines at a time when the height of suburban culinary achievement was a fancy jello mold. They encourage each other to live a bigger life than they have been.

Love & Saffron is a very quick read with a lot of heart that kind of sidles up to the issues that were fomenting during the mid-1960s. We’re led into Joan and Immy’s sometimes sideways discussion of the Civil Rights Movement, racial prejudice and women’s rights through the perspectives of two intelligent women who are in the midst of having their eyes opened and their consciousness raised and figuring out where they are going to stand. It was easy to feel with them and for them and this is just a story that I’m very glad I read.

3 thoughts on “Review: Love and Saffron by Kim Fay”