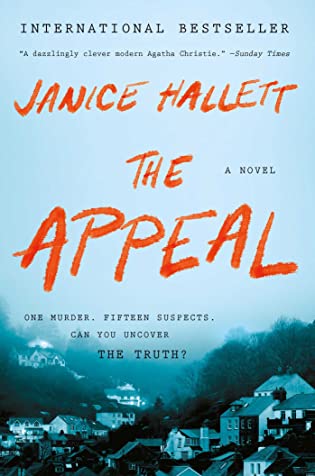 This murder mystery follows a community rallying around a sick child—but when escalating lies lead to a dead body, everyone is a suspect.
The Fairway Players, a local theatre group, is in the midst of rehearsals for an Arthur Miller play, when tragedy strikes the family of director Martin Haywood and his wife Helen, the play’s star. Their young granddaughter has been diagnosed with a rare form of cancer, and with an experimental treatment costing a tremendous sum, their fellow castmates rally to raise the money to give her a chance at survival.
But not everybody is convinced of the experimental treatment’s efficacy—nor of the good intentions of those involved. New actress Sam, a former NGO worker, raises doubts. But are her suspicions justified? Or does she have a history with the doctor involved? As tension grows within the community, things come to a shocking head the night of the dress rehearsal. The next day, a dead body is found, and soon, an arrest is made. In the run-up to the trial, two young lawyers sift through the material—emails, messages, letters—with a growing suspicion that a killer may still be on the loose.
A wholly modern take on the epistolary novel, The Appeal is a debut perfect for fans of Richard Osman and Lucy Foley.

As the reader opens this story, they are in pretty much the same position as Femi and Charlotte. They, and we, are presented with a pile of correspondence and miscellanea to read through on behalf of a presumably prestigious law firm. There’s an assumption that a crime must have been committed somewhere along the way or they wouldn’t have to read through this mess – but neither they nor we even know what the crime was, let alone whodunnit.

And it is a mess – as are the people whose correspondence they are plowing through. (Although that should probably be “plough” instead of “plow” as this mystery is set in the U.K.)

As we – and they – eventually find out, the point of receiving this pile of email texts and assorted what-nots without any explanatory information is for them to go through said pile with a completely unbiased viewpoint and create that explanatory information. Even if they don’t know what it is they’re supposed to explain – or why.

What emerges is the story of a small town with an even smaller and more insular community nestled within it. And what happens when an outsider manages to work their way in and exposes the secrets that lie at the center of everything that the members thought they all held dear.

Escape Rating A: The easy way to describe the appeal of The Appeal would be Noises Off meets Knives Out. A play about the behind the scenes shenanigans of a play combined with a story of all the members of a wealthy family behaving very badly while everyone involved is conning everybody else.

But that description does not convey the sheer, utterly glorious WTF’ery of The Appeal.

What we’re reading right along with Femi and Charlotte, is the seemingly uncensored email correspondence among a group of amateur thespians. The Fairway Players, helmed by director Martin Hayward and leading lady Helen Grace Hayward, have, for the last several years, put on a series of plays with the voluntary assistance of many members of the community who are, or at least who aspire to be, in the inner circle of the Haywards, the most important family in the area.

They’ve just completed their latest production and are casting for the next, when two critical events take place. Newcomers have arrived in the area, Sam and Kel Greenwood, both taking up nursing positions at a nearby hospital after nearly a decade serving in underfunded, overstressed but absolutely vital medical clinics in the Central African Republic.

And the Hayward’s granddaughter Poppy is diagnosed with an aggressive form of brain cancer, Medulloblastoma. They have learned about an experimental drug on trial in the U.S. that will give little Poppy a better chance of beating the cancer so they are sending out a high-profile appeal in order to raise the money for the not-yet-proven treatment.

An amount which keeps fluctuating, but always, only and ever upwards.

The genius of this approach to relating and eventually solving this mystery is the way that the readers are all (Charlotte, Femi, the actual reader themself – or at least this reader) is compelled to move from page to page, and email to email, rather in the same way that very few people can resist sticking at least a few pieces into any random jigsaw puzzle they happen to come across.

Each message is another puzzle piece, while just as it is in solving a cardboard jigsaw puzzle, some don’t seem to fit at all and some the reader/puzzle solver is oh-so-tempted to shove in whether they fit or not because the mind wants there to be a discernable pattern and inevitably starts trying to create it whether that pattern is visible yet or not.

What we do learn early on – as the viewer does in Knives Out – is that whatever is really going on these people are ALL hot messes.

At first, it seems as if the crime involved is a financial crime. From the earliest read of the correspondence it’s obvious that something about the medical charity “A Cure for Poppy”, isn’t on the up-and-up. What we – and the investigators – don’t know is whether financial fraud is the only crime being perpetrated.

And we can’t wait to find out.

Epistolary novels like this one, stories written entirely or nearly entirely as correspondence, are difficult to pull off, but The Appeal manages to do so with aplomb. In the case of The Appeal, that we are creating and solving the puzzle with each message – however off the wall either the text or the writer might be – makes the reader part of the solution in a way that compels much the same way as eating one chip from a bag. It’s hard to stop.

Or at least it was for me. I hope it will be for you, too.