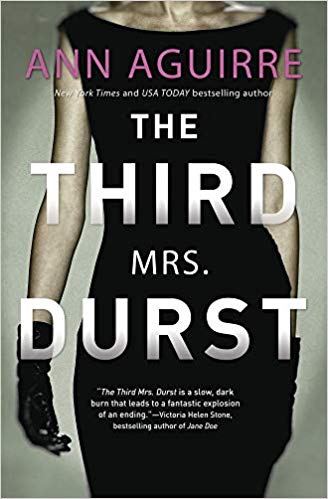 Marlena Altizer Durst lives in her husband's shadow. He controls her every move--what she wears, the food she eats, and the friends she's allowed to make. If she disobeys, there are...consequences. And he has all the power.

To outsiders, it seems that she leads a fairy-tale life. But nobody ever wonders if Cinderella was happy after she married the prince. Marlena has traded freedom and safety for luxurious imprisonment, and most days, that seems like a bad bargain. Death may be the only exit she's allowed. Just like his first wife. And his second. Unless she flips the script.

"The Third Mrs. Durst is a slow, dark burn that leads to a fantastic explosion of an ending."--Victoria Helen Stone, bestselling author of Jane Doe

They say that revenge is a dish best served cold. The Third Mrs. Durst serves it as if it were Baked Alaska, carefully prepared, frozen, and set on fire.

I almost said there’s no mystery here, that The Third Mrs. Durst is purely a thriller – and purely a thrill from beginning to end. Then I thought about it a bit, and realized that yes, it is also a mystery. Just not the mystery that the reader expects until the very, very end.

It seems like a dark twist on the Cinderella story, as it’s intended to be. Marlena Altizer escapes from the cowboy heroin capital of the world. The backwoods of Kentucky where oxycodone has destroyed lives, families and entire towns.

Marlena runs away to escape a world that holds no future for her except early and too many pregnancies, too many easy but temporary escapes via drugs and alcohol, and an early death after a battered life. The life that her mother chose.

At first it seems like she’s chosen to be Cinderella, escaping from her drudgery of an existence to a world of glitz and glamour – but with an even darker underbelly. She gets lucky – becomes a model and mostly doesn’t have to pay for her chances with her body.

Until she chooses to trade that body for the high-life as the trophy wife of a high-roller who just so happens to have a taste for beautiful young women with no pasts – so that he can mold them into exactly what he wants.

Marlena knows it’s a dark and dirty bargain – but it’s exactly what she bargained for. Until it looks like her “loving” husband has set his plans to make her follow the first Mrs. Durst, and the second Mrs. Durst, a little sooner than she was ready for.

Marlena Altizer Durst has no intention of joining her predecessors in the death that their Bluebeard of a husband has planned for her. Whether she can escape his deadly clutches is another thing entirely.

And get him into hers.

Escape Rating A+: This one had me from beginning to end. I got sucked in at breakfast and didn’t spill out until after dinner – gasping at the ending. An ending which reminds me a lot of the classic movie, The Sting, the kind of ending where you gasp and blink and realize that everything you thought you knew was what you were intended to know – and that you have been completely misdirected right along with most of the characters in the story.

And that’s as much as I’m going to say about that because I don’t want to spoil the effect. But it’s a wow!

What makes this so compelling is the character of Marlena, and the way that her story and her motivations are revealed slowly and carefully. In spite of being inside her head, we’ve been deceived right along with everyone else.

At first, this seems like a dark Pretty Woman. And it’s a story that we’ve seen and read about too many times. A young woman thinks she’s found a golden ticket only to discover that she’s been bought and sold by a man who holds all the cards. She’s his creation, and his puppet. He controls her with isolation, with violence, and with threats to anyone that she loves. She’s trapped and she knows it and he loves knowing that he has all the control.

But as the story progresses, we discover that it’s not exactly what we thought. Marlena went into this horror with her eyes wide open. She has an agenda of her own. She wants revenge for her sister, the first Mrs. Durst. She’s just not sure she can get it. Michael Durst is more ruthless – and less hinged, than she imagined.

She still plays her hand, fearing all the while that she may have dealt herself into a higher stakes game than she planned. As hard as it is to read about the abuse that she suffers, we are frightened for her. It seems as if its too much for her to take – and too much for us.

Then it all goes completely pear-shaped – not that it was any bed of roses before. It looks like her plans have unraveled. And then – boom! A boom that will explode everything. For her, for him, and especially for the reader, blinking and gasping at the end.

To celebrate the release of THE THIRD MRS. DURST by Ann Aguirre we’re giving away a $25 Amazon gift card to one lucky winner!