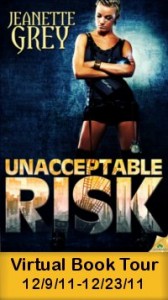 On December 18, I will be hosting the blog tour for Jeanette Grey’s new book, Unacceptable Risk. This is the first time I’ve ever hosted a blog tour, and I’m really excited.

For anyone who knows us, that again comes with a serious groan. We moved less than six months ago, from Gainesville Florida to the Atlanta suburbs, and here we go again.

But this is different. We are not moving because we planned this. We are, as so many people are right now, collateral damage in someone else’s story.

We rent. We do move a lot. And buying and selling property would be difficult even without the real estate meltdown. So we rent. You could say we beat the trend. Renting is difficult enough for us, because we have four cats. Two wouldn’t be a problem for most landlords, but four does give some people pause, no pun intended.

There was enough drama in finding this house. We didn’t know there was more to come. If you ever rent a place where they offer you a lease where either party can get out of the lease with 60 days notice, it just might be the proverbial ‘red flag’. We saw it as an advantage to us. Silly us.

The owners of our current house invoked the option because the current economic crisis has caught them in serious difficulties. They will be moving into this house, and the house they have been living in (it is closer to a McMansion) is a casualty of the economic downturn.

Unlike many people who have been renting houses or apartments and paying the rent faithfully each month, only to face eviction because the owners have not made mortgage payments, we did get those 60 days notice.

Since we received that notice at Halloween (do the math, it put the expiration at New Years’), we’re moving in mid-December. Weather in Atlanta in December isn’t a big deal, but the Holidays are the Holidays pretty much anywhere.

We did have the usual drama finding a place, but that isn’t the point. We just went through this. We’re doing it again. The expense of the move, while less than the cost of moving to a different state (we’ll even be in the same town) is not trivial.

We haven’t completely unpacked yet. We still have about 2,300 books. We’ll be going through them again, seeing if there are a few more (maybe a couple of hundred more) we can sell or give away. What Powell’s doesn’t want to buy, I may do some giveaways right here on this blog, so stay tuned!

Anything we haven’t unpacked since June, I wonder if we still need it? 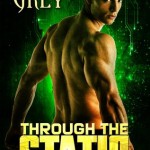 Review: Through the Static by Jeanette Grey

One thought on “Unacceptable Risks and Collateral Damages”