Mediating between two opposing sides in legal disputes comes just a little too easily for Naomi Witherspoon. She is an ace mediator for her law firm, but when she discovers that she can “suggest” that the car ahead of her just get out of her way, and it does so by running a red light almost causing a head-on collision, Naomi realizes that all the sudden coincidences in her life are more than just her being very good at her job.

Naomi never expects to discover that a Sioux goddess has chosen Naomi as her avatar for the upcoming end of the world. And Naomi isn’t all that sure that she wants the job.

It makes the conflict of Naomi’s emotions and beliefs a wild ride in Seized, the first book of The Pipe Woman Chronicles by Lynne Cantwell.

As Naomi’s journey begins, her life seems pretty good. She has a job she mostly like, a best friend she trusts and a handsome man who she hopes will finally pop the question after eight years of on-again/off-again that seems to finally be on track.

But there are some gaps in her life she still needs to fill. Her law firm is pretty wishy-washy about her mediation practice, and that’s a big problem. Naomi doesn’t feel right about litigation, especially considering some of the rich scumbags they’ve started representing. She’s good at finding compromises, maybe too good. She loves mediation, especially the court-appointed work she’s been doing.

About that man of hers…well, Brock has been part of her life since law school, but he’s got one heck of a roving eye, and sometimes other body parts. He’s very handsome but just a bit on the shady side when it comes to practicing law. But this time, their togetherness seems to be sticking. Naomi just wishes he’d finally ask her to marry him already.

There’s one haunting blank spot in Naomi’s life. She doesn’t know who her father is. Her mother says that he died in the Vietnam War, and won’t talk about him. His name isn’t on Naomi’s birth certificate, and there are no pictures. Her mom won’t talk about him. But the war ended two years before Naomi was born. Pregnancy may seem like forever, but it doesn’t last that long.

Naomi’s best friend Shannon knows all the answers. At least, enough of the answers to put Naomi on the right path. But Shannon knows Naomi well enough that Naomi will have to start the journey for herself.

But Shannon believes that the world encompasses more than just technology and logic. She believes that there is still magic, and faith, and powers that shape the universe in ways that Naomi’s legalist mind doesn’t want to see. Shannon says that she’s “fey on her Irish granny’s side”.

So when Naomi figures out that some of her gift of mediation is more than just training. Shannon takes her to a ritual Native American “sweat” outside of Denver. A very special ritual just for Naomi. So that Naomi can meet her destiny. And save the world.

But only if she can manage to accept it. While that destiny turns her entire set of beliefs, her identity, her world, upside-down and inside out.

Escape Rating B: This has the potential to be a very interesting series, and I definitely liked the opener. The story is ultimately about a war among the gods, through human avatars. What was interesting was that the primary point-of-view deity chose, not a warrior, but a mediator as their avatar. So the war is might be decided through negotiation rather than outright warfare. Neat choice!

This is a building of the fellowship type of story. A teacher, a healer, a mediator, a guardian create the team. The overarching story looks like a battle of the pantheons, with a flavor of “this has all happened before, and it will all happen again” thrown in for good measure. The gods and goddesses are picking sides, not because the conflict can be stopped, but because they want to make sure the result it “better” than the last time.

What constitutes “better”? That’s always the question. Naomi’s side represents better for the environment. The other side is looking for more unbridled development. Odin is on the other side. This has the potential to make things very, very interesting in the later books.

There is a love story involved, or rather, an insta-attraction sub-plot. But whether Naomi and Joseph’s story turns out to be real love or the goddess making sure things go along the right path for her purposes is something that will be further investigated in book 2. Which I want to read. 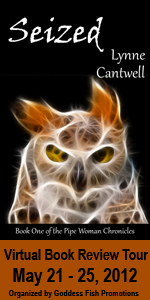 Lynne will be awarding a $10 Amazon GC to one randomly drawn commenter on the tour.

So, if you want to read all of Naomi’s journey (or all that’s available so far), here’s your chance! Comment! Leave a comment on this review, and on all the stops on the review tour this week. Lynne will be giving one lucky commenter a $10 Amazon GC. The more you comment, the better your chances of winning.