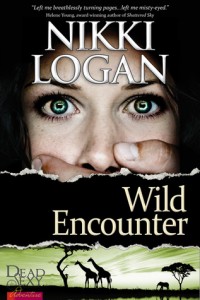 A wildlife release mission in Africa turns deadly when the convoy is hijacked by smugglers, and veterinarian Clare Delaney is taken hostage. Terrified for her life and her animals, the intrepid Clare establishes a rapport with the man she believes is the criminals’ leader, and reluctantly finds herself under his protection…and falling hard for the enigmatic man.

Alpha-to-the-max Simon deVries sees right through his sexy captive’s attempt to seduce her way to freedom. So when their simmering attraction flares into true passion, it takes them both by surprise. Now he’s torn between completing his secret mission and letting her escape without telling her his true identity. He knows if he lets her go, he will be risking his career, his life…and his heart.

Most people know about “Stockholm Syndrome”, where hostages “have positive feelings towards their captors, sometimes to the point of defending them.” The syndrome is all about mistaking the lack of abuse from their captors, or, in the case of Clare and Simon in Wild Encounter, a particular captor, for an act of kindness. Or possibly more.

At least, that’s what the shrink tells her after it’s all over.

There’s an inverse syndrome, the “Lima Syndrome.” That’s the version where the abductors develop sympathy for the hostages, sometimes to the point of letting them all go. Or, in the case of Wild Encounter, letting just the one hostage go.

And that’s what Simon’s superiors tell him he has after it’s all over.

But what if they’re wrong?

As romantic suspense, the start of this story is both amazing and slightly uncomfortable. Simon and a group of seriously bad dudes kidnap Clare by accident in order to get at the wild dogs her group is planning to release. She’s just collateral damage. So are the dogs.

Can either of them be sure the attraction they feel for each other is real, and not a product of the situation?

Clare only knows that Simon is the only one of the crew who treats her half-way decently. He protects her from the others. Throwing her lot in with him, throwing herself at him, is her best chance for survival.

Until she can rescue herself. Which is exactly what she does. With wits and skill and intelligence. Brains over brawn. Whatever she feels for Simon, she takes him down, too. And escapes from ALL her captors. Including the one she’s just spent an entire day in the sack with.

She drugs him comatose, along with the rest. His last act is to give her his gun. She drives far enough away before she brings back rescue that he has a chance to get away, she hopes. But that’s all she can do for him, whoever he was.

Six months later she’s back in Africa, because the dogs have been found on the wrong nature preserve, and she and her team have to relocate them after all. While she’s happy to know that they survived, she’s still emotionally scarred.

Then the British government sends  a team to guard them, to prevent a repeat of the “embarrassing events” of the previous transfer, and there’s Simon again. Clare finds out who he really is, and she’s both stunned and angry. He’s MI6 and her kidnapping nearly ruined his undercover case.

All she knows is that in 6 months he never contacted her to let her know that he was alive, or who he really was. Or what their last night together might have meant. Or not.

His case isn’t over. He can’t even tell her what it’s about. Or that he’s not sure what their last night meant either. Was it all part of one syndrome or another, or was what they both did, part of something they both really felt? And will they survive long enough to clear up all the misunderstandings?

Escape Rating B: The pages absolutely fly by in this romantic suspense tale. The author conveys both the romance and the danger of her veterinarian-heroine’s love-affair with her job and the places it takes her too, with deft insider knowledge.

But, we’re all left wondering how much of what Clare (and Simon) feel in the initial situation is real, and how much is part of the situation. The sex is jungle steamy, but are the emotions real? Those syndromes exist for very valid psychological reasons.

The angsting after Clare and Simon get back together is a bit, well, much. The misunderstandings are huge, and go on way too long. Either he can talk about it, or he can’t. If MI6 says he’s compromised, than he shouldn’t be there. Or he’s all there. Also, the nameless/faceless nature of the superiors who  said he couldn’t/shouldn’t be involved with Clare took a bit away from the reasoning on that one. I wanted to see his memory of that actual dressing-down, if not the event itself to give that more punch.

Where would spy stories today be without the invention of the micro-chip? (I’m just saying…)

But all things considered, I liked these characters. A LOT. I wanted them to find a happy ending, and I was happy for them when they did. And the plot did keep me very much in suspense. I did not know who the bad guy was, or even why the bad guy was, until Clare figured it out. I love it when the suspense works as well as the romance.