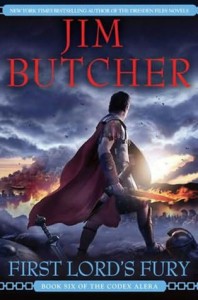 For years he has endured the endless trials and triumphs of a man whose skill and power could not be restrained. Battling ancient enemies, forging new alliances, and confronting the corruption within his own land, Gaius Octavian became a legendary man of war-and the rightful First Lord of Alera.
But now, the savage Vord are on the march, and Gaius must lead his legions to the Calderon Valley to stand against them-using all of his intelligence, ingenuity, and furycraft to save their world from eternal darkness.

I’ve had the hardcover of First Lord’s Fury on my shelves since it was first released. I’m astonished to see that I’ve been carting it around for three years. I think I didn’t want the Codex Alera series to end. It’s been a big sprawling mess of fun.

And that turned out to be kind of a problem. There are a lot of crow-begotten politics involved in the Codex Alera, and it took me a while to catch up to who was still backstabbing whom–while the Alerans were literally in a fight to save, not just their kingdom, but their entire species. Talk about “fiddling while Rome burns”. And an apt cliche, Alera Imperia owes a lot to Roma Imperia, including its legions.

But the Roman Empire didn’t have magic, at least as far as we know. Alera certainly does.

The center of the series has been Gaius Octavian, but at the beginning, we don’t know that’s who he is. He’s just Tavi. And that was the point. He learns to be First Lord very differently from his predecessors by growing up without the knowledge of who he is, and without the ability to furycraft, to do magic.

He works his way up through the ranks, as a furycrafter, as a legionnaire, as a man. He deals in what is, with or without power. He makes allies that someone who is used to being at the top of the heap would never think of.

The “powers that be” wish that he were anything but what he is. But then, his times demand someone like him. Because the enemy is not another race like the Alerans. They’re not human. They’re not even the Aleran’s ancestral enemies, the Canim. Who are, in truth, intelligent canines. The Alerans and Canim turn out to have common ground.

The enemy is the Vord. And they are insect versions of Star Trek‘s Borg. Just as implacable, just as absorptive  and just as deadly. They do not negotiate, they consume everything in their path.

Tavi has returned in defeat from the lands of the Canim, with the last of the Canim host as his allies, to Alera. The Canim were supposed to kill him. Instead, they’ve returned to bring down the Vord or die trying. Because if they don’t, the Vord will cover the land and there will be nothing left of people or Canim or free will. Only slaves and death.

Because Tavi knows how to bring down a foe when they have all the power and he has none. It’s what he was trained for. 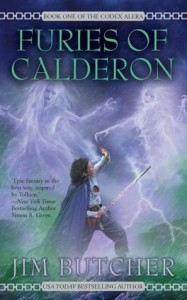 Escape Rating A-: Rating this is difficult. It took me quite a while to get back into it, because the politics are very complex. This series is meant to be read from the beginning. Start from Furies of Calderon. Everything is layered, one piece on top of another. Everything matters.

Once I got into it, I couldn’t stop. There were so many different threads, and they were all fascinating to follow. Tavi’s final maturity, in some ways, wasn’t as interesting as the other things that were going on. You knew he was going to get there in time. The only question was, how? His handling of the situation with Valiar Marcus was beautifully done, but I don’t want to spoil it.

Kitai is a terrific, absolutely magnificent example of a female warrior who is different and equal. She represents the outsider’s point of view so well. Her people are less civilized, for certain values of civilized, than the Alerans, so she is able to comment on Tavi’s society in a way that he can’t see.

The Canim are fascinating because they are not human, yet Tavi makes common cause with them. Any warm-blooded, free-thinking race has common cause with him against the Vord. How he works past ages of prejudice and war was, not just interesting, it was often slyly amusing.

The Vord, however, were just a bit too much like the Borg. Really. Plant-based Borg, complete with queen.

About the audiobook. The reader, Kate Reading was great. She voiced all of the parts, including the Canim, who have incredibly rough bass voices that must have been absolute hell to do. However, there were horns blaring at the end of every chapter that drove me nuts. I could seriously have done without the horns, but that wasn’t what made me stop the audio and switch to print. I just couldn’t stand the suspense by the last 50 pages and had to find out how it ended.

If you like epic fantasy and have somehow missed Alera, you’ve missed out on something terrific. And the series is complete, so you can read the whole thing all at once without having to wait. Treat!!!