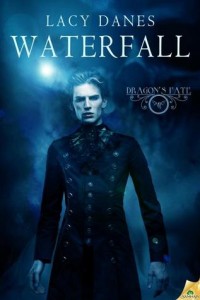 Curses are designed to be cruel, but the one afflicting Jordan and his brothers is almost beyond bearing. A dragon born by blood magic, he is an immortal trapped in human form, with only one hope of finding his eternal mate. He must bite her—and pray she lives.

One dark night, he senses the wounded heartbeat of a woman in the shadows, begging him to end her life. Ever the gentleman, he chivalrously obliges her wish. Only to discover three days later that she lives. And has married another.

Celeste always dreamed of marrying for love, but the nightmare of living in her father’s home drives her to wed the Duke of Hudson. Yet on her wedding eve, she is compelled to follow a mysterious man who professes to know her secret. A man with curious blue scales on his muscular arms—whose shadowed eyes reflect a dangerous mix of destiny and desire…

Product Warnings
This novel contains explicit sex, sex in water, four super-hot dragon brothers, and a curse born from magical power that has left them wondering who they are all their lives.

Dragons, fated mates, infidelity and vampires. Oh and did I mention dragons?

The concept for this series  (Waterfall is definitely the first (and introductory at that) novella in a series) is fascinating.

Four dragons are born from stone eggs and cursed to live as immortal men. Each brother has power over one of the elements. None have any memory of being dragons.

They call themselves the Zir.

All they know is that the curse will end when they find their destined mates.

It’s a pity that the only way they will recognize their fated mates is by biting a poor woman (yes, like a vampire) and having her survive the poison they inject into their bites.

Each brother has left a string of lovely corpses behind him. Five centuries worth of corpses.

And their powers are fading. It’s a curse after all.

Until Jordan, the water dragon, finds Celeste washed up on shore, surrounded by the wrack of a terrible disaster at sea. Celeste is the only survivor. He bites her to give her a quick death, because her body is broken beyond all possibility of survival.

The next time he sees her, she is about to become the bride of one of their few human allies, the Duke of Hudson. Her survival means that she is Jordan’s mate.

Hudson’s long set plan to marry her means that someone else has been manipulating all of them like pieces on a chessboard. But none of the brothers, or, for that matter, poor Hudson, know who the other chessplayer really is. Or even why he’s playing.

All Jordan knows is that she is the reward for his centuries of endless waiting. The world has come alive for him again. And Celeste finally discovers that all the eerie things that have made her different, are all part of being fated to mate the water dragon.

But first there is this pesky problem of Celeste already having a promised husband. And that the Zir have a powerful enemy who has been waiting a long time for a chance to defeat them. Again.

Escape Rating B: There’s a lot of terrific build up of the scenario. This alternate Regency world, where those who are slightly “other” are known to the ton, is pretty cool.

But we only get glimpses of how things got there. It felt a bit like a tease.

It was definitely a tease about how the Zir got to be cursed, but we only know what they know, so that was fair.

The Duke of Hudson had to have had a powerful reason for going so completely “dark side”, and we only got a glimpse of it. We don’t see how he got seduced to fall. He was more of a charicature than a real villain. Or even a front for the real villain.

I enjoyed the story for the way it begins the saga. In this particular instance, the “fated mates” trope does make sense. There was certainly a reference in the story that what Jordan and Celeste felt wasn’t love, but that it could be in time.

Using the destined mates trope as an excuse for infidelity, just doesn’t say “romance” to me. It may be “curse-ending” but it’s not romance. On that other hand, paranormals don’t promise happy endings, just more adventures.

And I always want more worldbuilding. I can’t wait to see what Ms. Danes does with this fascinating setup. I’m looking forward to finding out the next brother’s and dragon’s fate. 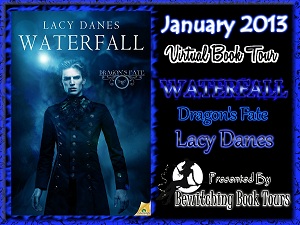 One thought on “Review: Waterfall by Lacy Danes”