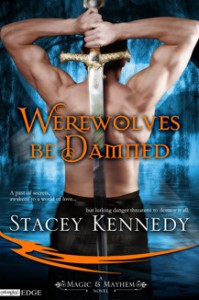 Nexi Jones—part witch, part guardian, and wannabe kick-ass warrior—can’t throw a punch or conjure the simplest magic. But that doesn’t stop her from hunting the werewolves who slaughtered her human family. She’ll have her revenge, but only if Kyden, the elite guardian, would get the hell out of her way.

Kyden can’t decide if Nexi wants to get herself killed or if she just has no clue what she’s doing. But her father made it clear: keep Nexi safe…or else. Of course, the more Nexi runs toward revenge, the more she needs Kyden’s aid, and as she grows into her power and confidence, so does his desire to protect her. The only problem? She’d rather he dropped dead.

But when a vampire paints a bull’s-eye on Nexi’s back, she’s hard-pressed to deny Kyden and the help he’s offering. Even if it means getting her revenge will be a little bit harder. At least it will still be as sweet.

The series title, Magic & Mayhem, might have made a better title for this story than Werewolves Be Damned. At least it would have made a little more sense. And this first story in Stacey Kennedy’s new urban fantasy series needed some. Or at least a bit more explanation in its worldbuilding.

Nexi Jones’ story starts with a bang. We find this 21st century woman in the middle of a fight between werewolves and medieval knights, both making sure she stays alive as the werewolves kill the people she believes are her parents. She’s confused and so are the readers. Or at least this reader. Especially when the prologue ends with a classic reveal…the victims were not her birth parents. One of those medieval knights was her father. Of course the poor woman passes out. Wouldn’t you?

From there, we’ve got three stories running more or less in parallel, and the race is uneven. The good thing is that any one of the three would be a kick-ass story. The unfortunate thing is that there may be one too many threads, and they don’t quite braid together evenly.

Nexi Jones isn’t who she believed she was, and the world isn’t what she thought it was, either. So thread number one is her search for identity. Guarding the human world that she knew are, well, Guardians, those medieval knights she saw before she passed out. And yes, Nexi, one of them really is your father. Lucky for her, they are the good guys, but one of them has a whole lot of ‘splainin’ to do.

Her mother was a witch, the other half of those ‘good guys’. And mom is really dead, though exactly how that happened and why that tragedy led dad to hide Nexi in the human world without her powers isn’t fully explained. But now that she’s been found, she has to put on her big girl supernatural pants and learn how to use those powers, fast. Again, Nexi’s journey-story.

There is something powerful about Nexi being the only Guardian/Witch half-breed, but not enough detail on the how and why.

Nexi wants revenge on the werewolves who murdered her adoptive parents, so she needs training in how to use her powers. The Guardian who signs up to train her, let’s just say that he does it because he wants to stick around Nexi and figure out whether being near her will get her out of his system, or whether he can turn their love/hate relationship more to the love side of that equation for both of them.

Last, and very definitely not least, those werewolves did not attack Nexi’s family at random. It was all part of a long-term plan on the part of someone who has had the Guardian Council in his sights for a long time. Nexi’s new-found powers are a key part of his nefarious schemes.

Escape Rating B-: I wish this one had decided to stick with Nexi’s journey, and saved the love story for a later book. The world that Stacey Kennedy is creating has the potential for a lot of depth, with tons of interesting background and cool stories, but I felt shortchanged on the fantasy side by having things go almost straight to the love story. Nexi (and this reader) needed to know more about who she was, where she came from and how the Guardians’ world meshed with the Earth she knew before she gave herself to someone. My 2 cents.

We also don’t know enough about Kyden (Lexi’s other half) to really understand who he is and why Nexi falls in love with him. There are depths there, but we don’t get the chance to learn them. The love story happens too fast and too soon.

Reading Werewolves Be Damned, I felt like I had been dropped into the middle of a much bigger story than the one that I got. Especially when I finished and discovered that even the title is a red herring.

2 thoughts on “Review: Werewolves Be Damned by Stacey Kennedy”