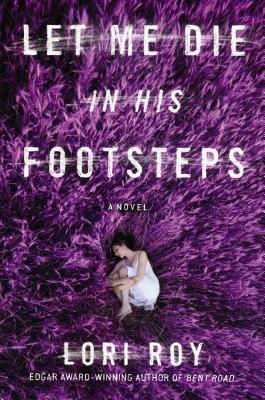 On a dark Kentucky night in 1952 exactly halfway between her fifteenth and sixteenth birthdays, Annie Holleran crosses into forbidden territory. Everyone knows Hollerans don’t go near Baines, not since Joseph Carl was buried two decades before, but, armed with a silver-handled flashlight, Annie runs through her family’s lavender fields toward the well on the Baines’ place. At the stroke of midnight, she gazes into the water in search of her future. Not finding what she had hoped for, she turns from the well and when the body she sees there in the moonlight is discovered come morning, Annie will have much to explain and a past to account for.

It was 1936, and there were seven Baine boys. That year, Annie’s aunt, Juna Crowley, with her black eyes and her long blond hair, came of age. Before Juna, Joseph Carl had been the best of all the Baine brothers. But then he looked into Juna’s eyes and they made him do things that cost innocent people their lives. Sheriff Irlene Fulkerson saw justice served—or did she?

As the lavender harvest approaches and she comes of age as Aunt Juna did in her own time, Annie’s dread mounts. Juna will come home now, to finish what she started. If Annie is to save herself, her family, and this small Kentucky town, she must prepare for Juna’s return, and the revelation of what really happened all those years ago

This is a story about the keeping of secrets, the cost of lies and the sometimes strange power of belief.

There is a big lie at the heart of accepted history in rural Hayden County, Kentucky. It’s a lie that involves three families, the town, and a slice of infamy.

It turns out to be a very big lie.

In 1952 Annie Holleran turns 15, and then 15 and a half. In her small and isolated town, 15 and a half marks the point between girlhood and womanhood. Annie prefers to think of it as the demarcation between childhood and adulthood, and hers turns out to be so, just not in the way that anyone would have expected.

We meet Annie and her younger sister Caroline, but their relationship isn’t sweet sisterhood and mutual support. There’s nothing specifically wrong, but Caroline has always been the pretty child that everyone loves. She also sucks all the air out of the room when it comes to Annie. Because when Caroline is there, people only notice Annie to compare her unfavorably, and Caroline always gets her way because she seems so pretty and proper and biddable.

Annie is striking rather than pretty, and she’s taller than all the other girls (and most of the boys) her own age. But what makes Annie stand out is that Annie isn’t really Sarah and John Holleran’s daughter, and everyone knows it.

Annie is the daughter of Sarah’s sister Juna and Joseph Carl Baine. Joseph Carl has the distinction of being the last man publicly hanged in the U.S. Juna is in some ways even more distinctive. Juna was the local evil witch, and Annie seems to have inherited all of the physical signs that make everyone believe she is every bit as witchy as her mother.

People cross to the other side of the street to avoid running into Annie, just as they did with Juna. People believed that the black-eyed, blonde-haired Juna was the epitome of evil. After all, she bewitched Joseph Carl into fathering her unnatural baby, and he was hanged for it.

Of course, the true story is a whole lot different. Except for one detail – Juna really was an evil witch. Not in the sense of spellcasting. There’s no eye of newt or tongue of frog. Juna is a witch because she manipulates people based on their fear of, and belief in, her terrible powers. Which gives her a different kind of terrible power that she is more than willing to use.

There are two stories in this book, and they run in a kind of parallel. In 1936, Juna and her sister Sarah live through the events of that fateful summer where their little brother Dale went missing, where Joseph Carl Baine came back to Hayden County, and where justice went very far astray.

In 1952, the “sisters” are Annie and Caroline. Annie fears that her long-missing mother will come for her, now that she is of age, and take her away and make her evil just like her mother. Annie, while not precisely happy where she is, feels safe and cared for.

But when Annie discovers old Cora Baine’s dead body, the past, and the truth, invade Annie’s life and her small town. One of the Baine boys comes back to Hayden, and the secrets about Ellis Baine, Sarah Holleran and that long-ago summer reach out from the past to touch everyone who was involved.

And Annie finds out the truth about herself, but at a terrible price.

Escape Rating B: So many of the events in this story happen because people really believed that Juna had evil powers and was perfectly willing to curse people and would be effective at it. It looks like her sister Sarah was the most skeptical of Juna’s so-called powers, while at the same time still caught up by Juna’s very successful manipulation of people and events.

The events in 1952 serve as a way to bring the truth of 1936 to light. They also close the circle on all the open questions, and there are certainly a ton of those. Sarah knows most of the truth, but not all of it. However, her parts of the old story are in some ways the most chilling. Because Sarah acted against her nature in those long-ago events, where Juna acted in concert with hers.

Juna really was evil. Not because of any hidden power, but the very human kind of evil. She enjoyed causing people pain, whether mental pain or physical pain. She manipulates the events of her brother’s disappearance because she wants to see if she can. She wants to see someone hang for her because it makes her feel powerful. But the only injustices done are ones that Juna commits and/or arranges.

The fascinating thing about Juna’s case is how easily people fell in with her manipulation. Even though there are tons of questions about her testimony, and no one likes or trusts her, everyone believes. That willingness to believe her power is probably the most frightening part of the story.

So many of Juna’s real sins are visited upon Annie, and it’s painful to see. Annie isn’t quite an outcast, but people are afraid of her from an early age because of her mother. That Juna is her real mother is a secret that everyone knows and no one talks about. Until it jumps out of the past to bite everyone.

There’s a question throughout the story about whether Annie, Juna and Annie’s grandmother really do have a bit of power, like the stories about “The Sight” in Celtic mythology. Whether they truly do or not is left up to the reader to judge.

Anyone who has read and enjoyed Sharyn McCrumb’s Ballad series, which starts with If Ever I Return, Pretty Peggy-O, will love Let Me Die in His Footsteps.

This story is very loosely based on a true incident in the history of Owensboro, Kentucky, where the last public hanging took place in the summer of 1936. Whether justice was done in either the true or the fictional case is a matter for debate. Some of the media attention in both cases was due to the county Sheriff being female. (Remember this was 1936) Reporters as well as locals wanted to see a woman push the switch to hang a man.

On a personal note, a late friend grew up in Owensboro at the time just after the fictional story takes place. He told me that in his childhood, the “three R’s”, instead of “Reading, ‘riting, and ‘rithmatic” were “Reading, ‘riting and Route 42 to Ohio”. If the place was anything like the insularity portrayed in this story, now I understand.

As a part of this tour, I am giving away a copy of Let Me Die in His Footsteps to one lucky U.S. or Canadian commenter. Just fill out the rafflecopter and cross your fingers!

8 thoughts on “Review: Let Me Die in His Footsteps by Lori Roy + Giveaway”