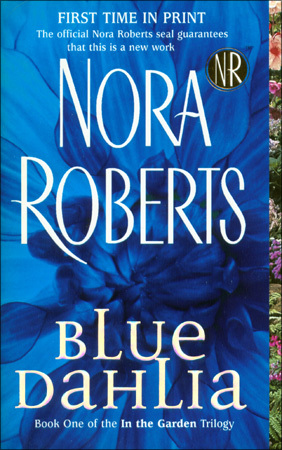 Three women meet at a crossroads in their lives, each searching for new ways to grow--and find in each other the courage to take chances and embrace the future.

Stella has a passion for planning that keeps her from taking too many risks. But when she opens her heart to a new love, she discovers she will fight to the death to protect what's hers.

In the contemporary romance genre, there just isn’t anyone quite like Nora Roberts. As a critic, it is easy, on the surface, to say, “ho hum, another Nora Roberts contemporary/supernatural romance trilogy,” but that would do this brightest of stars in the pantheon a grave disservice. Every time I pick up a new one of her trilogies, I find new reasons to love Roberts’ writing–in the formulaic framework of “three women, three love stories, supernatural puzzle to solve,” she always finds new ways to entertain and challenge me.

Blue Dahlia is no exception.  In the first two chapters, we are given crucial backstory–an insane woman, who dies lonely after her only child is stillborn, and a young mother who loses her husband, the centerpiece of her life, in a tragic accident. Then, we cut to Memphis in modern times, and our story is off and running.  Stella Rothschild is a planner, a horticulturist, and a mom of two rambunctious young boys. She set her career aside when her first son was born, but when husband Kevin dies in a plane crash, she picks it right back up. A year or so after the accident, she moves from Michigan back to Memphis, where her father and stepmother live, and where she was born, to start anew.

The Harper family has been among the scions of Memphis society for generations, but Roz Harper is not content to attend fancy balls and teas; she has started a nursery business near the great old mansion, and it’s a growing concern; she needs a manager. It’s a match made in heaven, as she turns over a wing of the huge old house to Stella and her children for a time, and they set to work. On the day they move in, Roz tells Stella about the Harper Bride:

“I meant to ask who else lives here, or what other staff you have.”

“Oh? He said something about being outnumbered by women before we got here.”

“That’s right. It would be David, and me, and the Harper Bride.”

Roz carried the luggage inside and started up the steps with it. “She’s our ghost.”

“A house this old isn’t haunted, it would be a damn shame, I’d think.”

The Bride seems to be a pleasant enough being; she sings a lullabye to Stella’s sons at night, and doesn’t appear threatening, merely sad.

Stella gets to work organizing and improving the business at the nursery, but she finds the landscape designer to be the most frustrating man! Logan just won’t do his paperwork, he comes and grabs stock for his projects without telling her, and he’s just plain abrasive! For his part, he’s not fond of the Yankee-come-lately who’s wanting him to actually sit in an office and do paperwork!

Once we’ve got our setting and personae in place, the progress is almost as predictable as the sunrise; I sha’n’t elaborate for you, but it goes where you’d expect with a few not-unpleasant twists along the way, including meeting our third-woman for this trilogy, a young, very pregnant distant relative of Roz who turns up on her doorstep late one night. We also find that the Harper Bride is a bit insane–she gets anxious and more-threatening when Stella starts seeing more to Logan than the irritation he started out being. 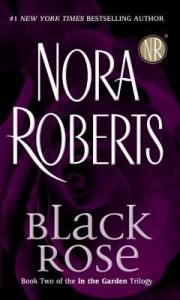 Escape Rating: A+. Too many “supernatural romances” these days just do not appeal to me–werewolves and sparkly vampires are just not my thing. But a ghost story, a mystery, an ancient curse…now those, even my deeply-agnostic soul can sink her teeth into. Nora Roberts has given us a conventional ghost story. No one knows who the Bride is, nor why she came to haunt Harper House, and this first entry in the series does little to resolve that–I expect as I read Black Rose and Red Lily, all of that will be resolved. As usual, I can make guesses about who the other two women get attached to in subsequent books, but it’s not completely transparent yet. The book is jammed with Southern charm, and the odd sayings that Southerners often have make plenty of appearances.

The big prize of Blue Dahlia, for me, though, was our heroine Stella. By nature, like Stella, I am a very detail-oriented, planning-centered person. I like my lists, my catalog of details, and my orderly progression of plans. In Stella, I found a woman who could be…me. The keystone of romance authorship, for so many great authors, is to make the heroine someone the reader can identify with, some who is Just Like Them. The frustrations of raising children alone are things I understand, having single-parented my own children, and her irritations with the too-handsome, but too-cavalier Logan are things that I can find totally believable. At one point in the book, Logan looked up Stella’s father and stepmother, and went to their home without telling Stella what he was doing, in order to ask her father’s permission to marry her. I thought to myself, “Stella is going to kick the gong when she finds out about this,” and sure enough, she did.  I thought that not because it was predictable writing–but because that’s what I would do in her shoes.

Blue Dahlia is top-shelf Nora Roberts, definitely worth a read. I rushed out the next afternoon after finishing it to crawl over my usual used-bookstore haunts to find Black Rose, and can’t wait to read it!