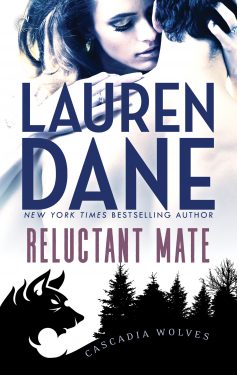 As daughter of the ruling Pack family, Layla Warden is under pressure to settle down. Find a nice wolf mate from a nice wolf family and have nice wolf babies. Layla has other plans, but when you're a werewolf, biology trumps plans. And when Layla meets Sid, the sex is so intense, so hot, so consuming, it's more than just a connection. It's a mating bond.

Sid Rosario wasn't expecting to find his mate so soon—some wolves never find theirs. Now that he's found Layla, he's never letting her go. But lust and desire alone aren't enough to secure their bond. If they want this incredible happiness to last, there's one more thing they'll have to do… 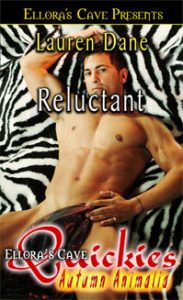 Reluctant Mate is a re-issue of Reluctant, the prequel novella for Lauren Dane’s Cascadia Wolves series. Which I somehow managed never to read, so when the first two books in the series, Reluctant Mate and Pack Enforcer, popped up on NetGalley, I decided it was time to give the series a try.

Reluctant Mate is a terrific teaser for the series, so I’m glad that I grabbed it.

This introduction is short, and has its sweet moments, but it is a sex-into-love story that is very heavy on the sex, and light on the romantic angles. And that makes sense in this particular world, as this is also a fated mate story, and it does some nice things with what is otherwise an often tried trope.

Layla is way more invested in her ten-year-plan to reach the top of the corporate ladder. She’s just received a promotion to a corner office, and the raise to go along with it. But keeping her head above water with her new responsibilities has been all work and no play.

Her best friend drags her to a werewolf only club for a girls’ night out, and that’s where Layla meets Sid. He’s an artist from Phoenix, visiting Seattle for a few weeks to carry out a commission. A brief fling is all he has in mind, until their mating bond kicks in. And Layla, literally, heads for the tall timber.

This is so not what she wants. She wants to focus on her career. She’s seen what happens to the other females in her family when the mating bond kicks in, and she’s not ready to let a man take over her life.

So she runs. Instead of dealing with the issues, she runs far and she runs fast. But she can’t outrun the bond that will kill her if she doesn’t give into it in time.

Escape Rating B: This is a hot and steamy little teaser for the rest of the series. The reissue wasn’t updated much, and doesn’t seem to suffer for it. The story is so tightly focused on Layla and Sid and the bond she can’t escape that the differences in the world between the mid-1990s and now don’t really register.

Except for the mullets. Thank goodness that hairstyle went out of fashion in a hot minute, and stayed that way. I’d forgotten just how ugly they were.

What makes this treatment of the fated trope just a bit different, and just a bit more interesting, is what makes Layla run. She wants her job and her life, and she’s happy with them. She doesn’t want to give anything up for a man, but she wouldn’t mind including a man in that life. Sid is a great choice, in spite of the circumstances that give them no choice. His career is not location-dependent, and he’s happy that Layla has a career of her own that is a bit steadier than his. He wants to blend their lives, not take over hers. 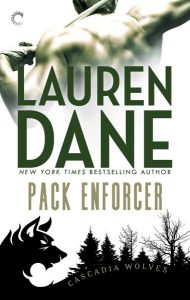 It just takes her a while to figure that out. She flails a bit, but she flails in the way that anyone would who just discovered that their life has been turned upside down, and can’t be turned back.

Now I’m sorry that I missed this series the first time around, but am very happy that it’s back so I have the chance to see where it all leads. Pack Enforcer looks like a much deeper, and much more interesting, dive into this world. I’m looking forward to it.