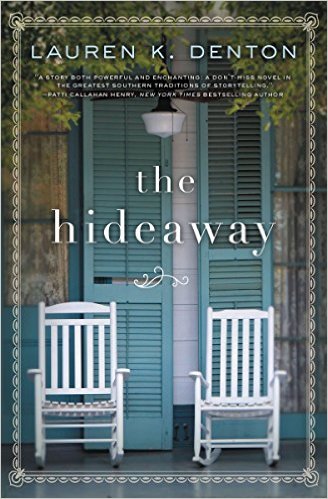 When her grandmother’s will wrenches Sara back home from New Orleans, she learns more about Margaret Van Buren in the wake of her death than she ever did in life.
After her last remaining family member dies, Sara Jenkins goes home to The Hideaway, her grandmother Mags's ramshackle B&B in Sweet Bay, Alabama. She intends to quickly tie up loose ends then return to her busy life and thriving antique shop in New Orleans. Instead, she learns Mags has willed her The Hideaway and charged her with renovating it—no small task considering Mags’s best friends, a motley crew of senior citizens, still live there.
Rather than hurrying back to New Orleans, Sara stays in Sweet Bay and begins the biggest house-rehabbing project of her career. Amid Sheetrock dust, old memories, and a charming contractor, she discovers that slipping back into life at The Hideaway is easier than she expected.
Then she discovers a box Mags left in the attic with clues to a life Sara never imagined for her grandmother. With help from Mags’s friends, Sara begins to piece together the mysterious life of bravery, passion, and choices that changed Mags’s destiny in both marvelous and devastating ways.
When an opportunistic land developer threatens to seize The Hideaway, Sara is forced to make a choice—stay in Sweet Bay and fight for the house and the people she’s grown to love or leave again and return to her successful but solitary life in New Orleans.

The Hideaway turned out to be an unexpectedly lovely read for me. I’ll talk about the ‘lovely’ first and get to the ‘unexpected’ parts at the end. You’ll see why, I promise.

The Hideaway fits very well into a particular sub-sub-sub-genre of women’s fiction/small town romance. This is one of those stories where a woman finds herself obligated to return to the small town she grew up in, after years away in some big city, to take care of some family something-or-other that is left behind when an elderly relative dies (or occasionally has a health crisis). And in the process of taking care of whatever-it-was, she discovers that the relative she sincerely loved but didn’t visit enough had some big secrets that she finds out about much too late, when that person is gone. And that her new knowledge of those secrets both changes the way she views that person, and makes her rethink quite a lot of her own life.

Especially since her return home usually forces her to confront whatever baggage she left behind – because it’s all still waiting for her back at what used to be home.

And for whatever reason, taking care of that final obligation always takes way more time than she planned, and in that time she has a chance to rethink her current life in whatever big city she now resides, the opportunity to fall back in love with her hometown, and the chance to fall in love with someone completely new.

Which also brings her to a major life choice; return to the life she left behind in the city, or stay in the small town she never wanted to return to with a new purpose and a new love.

This particular plot has become a classic for a reason – in the hands of a good writer, it makes a powerful (and lovely) story, as it does here in The Hideaway.

What makes The Hideaway (the book) and the Hideaway (the place) are the people and their stories. Especially Sara and her grandmother Mags. Mags has just died, and has passed the ownership of the run down Hideaway Bed and Breakfast, along with its slightly run down permanent residents, to Sara.

Sara, the proud but workaholic owner of a successful decorating shop in New Orleans, expects to wrap Mags’ estate up in a week, only to discover that it is going to take months to carry out Mags’ final wish that she restore the Hideaway back to its original splendor, and then either sell it or continue to operate it, however she sees fit.

The long-term residents of the Hideaway pretty much HAVE a fit. The four older residents discovered the Hideaway as a safe harbor 30 or more years ago. It’s their home as much as it was Mags’, and they all feel bereft, even though they all know that Mags did the right thing. It was, after all, her house.

But as Sara dives into the renovations, she discovers that there was a whole lot more to Mags’ past than she ever imagined, and that the things she believed, both about Mags and about herself, are not quite what she thought they were.

Escape Rating A-: The Hideaway is a sweet and lovely take on a tried-and-true trope, and it works very, very well.

The story (and its perspective) flips back and forth between Mags’ arrival at the Hideaway in the late 1950s, and Sara’s return to the Hideaway and Sweet Bay Alabama in 2016. Both stories have a lot of heart. They also mirror each other. Mags has a good life, but she misses her happy ever after. Sara still has a chance at hers – she just has to drop her old baggage and grab it.

On the one hand, there’s that saying about the past being another country, that they do things differently there. There’s also the saying that specifically refers to the South, that the past isn’t dead, it isn’t even past. Both those versions come into play in this story.

The world, and the options for women in it, were rather different in the 1950s than they are today. That Mags managed to carve a life of her own even somewhat away from the expectations of her parents was a major accomplishment for her and a huge disappointment for them in ways that seem almost quaint in 2017 – but were real at the time. That she fell short of the ultimate goal due to other people’s beliefs and expectations does turn out to be a tragedy, but not as big a tragedy as it might have been.

Sara, on the other hand, has the possibility of having, if not “it all”, then at least most of it. Her journey felt easier to identify with, but Mags’ story had more depth. Mags did the best she could in the circumstances she had, and managed to make a life and world for herself mostly according to her own desires. We wish better for her, but it is surprising that she got as much as she wanted.

And for readers, both Mags AND Sara’s journeys are at turns heart-rending and heart-warming, and we feel for both of them and want them to be happy. That Mags came so close but didn’t quite make it is heartbreaking because we care.

I loved this book. It made a neverending day at an airport absolutely fly by. But I was surprised that I enjoyed it so much, and by this point you’re wondering why. Most readers don’t pay a whole lot of attention to the publisher of a book, and with some exceptions, I usually don’t either. But there are a few genres that just don’t interest me, and one of those genres is inspirational literature, whether romance or nonfiction. The publisher of The Hideaway, Thomas Nelson Publishers, is a well-respected publisher of inspirational literature, specifically Christian inspirational literature. When The Hideaway was offered for tour, as much as the description of the book appealed to me, I just wasn’t interested if it was inspirational. I was assured it was not, and after reading it I completely concur, it isn’t. (There is nothing wrong with inspirational literature, it just isn’t my cuppa, and life is too short to read books that you know upfront are just not your jam.) The Hideaway is not an inspirational romance. It doesn’t have any of the characteristics that make a book an “inspie”. The romances in this book are both squeaky clean, but a well-done “fade to black” is a tried-and-true method of handling romance scenes. And I’d much rather read a well-done fade to black than a horribly or laughably written sex scene. But the lack of sexual scenes does not make a book inspirational. And The Hideaway isn’t. It’s just an excellent women’s fiction/contemporary romance story.

This does all lead up to something. At first, based on the publisher, I was expecting an inspie, and was pleased to discover that this book isn’t. But because I enjoyed it so much, I’m now concerned about it. My concern is about whether this book will find the audience it deserves, because of the publisher. People who look at Thomas Nelson for an inspie are going to be disappointed. And people who stay far, far away from inspirational fiction aren’t going to even look at this book, because of the publisher. It’s definitely a dilemma.

So go back to ignoring the publisher. If you like southern fiction, or small town romance, or stories where there’s a choice to be made between the life you have and the life you’ve come to love, read this book!

6 thoughts on “Review: The Hideaway by Lauren K Denton”