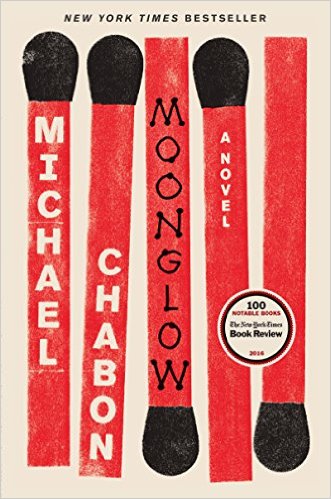 Following on the heels of his New York Times–bestselling novel Telegraph Avenue, Pulitzer Prize–winning author Michael Chabon delivers another literary masterpiece: a novel of truth and lies, family legends, and existential adventure—and the forces that work to destroy us.
In 1989, fresh from the publication of his first novel, The Mysteries of Pittsburgh, Michael Chabon traveled to his mother’s home in Oakland, California, to visit his terminally ill grandfather. Tongue loosened by powerful painkillers, memory stirred by the imminence of death, Chabon’s grandfather shared recollections and told stories the younger man had never heard before, uncovering bits and pieces of a history long buried and forgotten. That dreamlike week of revelations forms the basis of the novel Moonglow, the latest feat of legerdemain in the ongoing magic act that is the art of Michael Chabon.
Moonglow unfolds as the deathbed confession, made to his grandson, of a man the narrator refers to only as “my grandfather.” It is a tale of madness, of war and adventure, of sex and desire and ordinary love, of existential doubt and model rocketry, of the shining aspirations and demonic underpinnings of American technological accomplishment at mid-century and, above all, of the destructive impact—and the creative power—of the keeping of secrets and the telling of lies. A gripping, poignant, tragicomic, scrupulously researched and wholly imaginary transcript of a life that spanned the dark heart of the twentieth century, Moonglow is also a tour de force of speculative history in which Chabon attempts to reconstruct the mysterious origins and fate of Chabon Scientific, Co., an authentic mail-order novelty company whose ads for scale models of human skeletons, combustion engines and space rockets were once a fixture in the back pages of Esquire, Popular Mechanics and Boy’s Life. Along the way Chabon devises and reveals, in bits and pieces whose hallucinatory intensity is matched only by their comic vigor and the radiant moonglow of his prose, a secret history of his own imagination.
From the Jewish slums of prewar South Philadelphia to the invasion of Germany, from a Florida retirement village to the penal utopia of New York’s Wallkill Prison, from the heyday of the space program to the twilight of “the American Century,” Moonglow collapses an era into a single life and a lifetime into a single week. A lie that tells the truth, a work of fictional non-fiction, an autobiography wrapped in a novel disguised as a memoir, Moonglow is Chabon at his most daring, his most moving, his most Chabonesque.

I listened to Moonglow, and finished a few days ago. Since then, I’ve been mulling it over. It’s a book that makes the reader think. And in my case, feel.

One of those sets of thoughts regards belief, particularly the reader’s belief in how much of this narrative is true, and how much is fictional. And possibly where that blurry line is in the middle.

If, as the quotation says, “Fiction is the lie that tells the truth” then which parts are relatively factual and which are stitched up out of the ‘whole cloth’ doesn’t really matter. The story as a whole still feels true.

It’s a story about the ongoing costs of World War II, particularly on the generation that fought and survived that brutal war. It is also a story about one particular family, a family for whom, as the narrator says, “Keeping secrets was the family business. But it was a business, it seemed to me, that none of us had ever profited from.”

This is the author’s attempt to profit from that family business, both in the literal sense, the hope that the book is a success (which it is), and in the figurative sense of finally laying some of the family ghosts to rest. Or at least of getting the family skeletons out of their hidden closets and finally burying the old bones.

Escape Rating B: On the one hand, I got caught up in Moonglow. On the other, I set it aside for an entire week while on a trip where I didn’t have the chance to listen to it. On my alien third hand, I was able to slip right back into it when I returned.

What made that easier was that the story is not told in a chronological narrative. Instead, the bits and pieces of the life of the author’s grandfather (we never do hear his name) is told in flashes and slightly loopy flashbacks. The man is in the final week of his life, dying of cancer, and pumped up with some major drugs to alleviate his pain. Or make it at least bearable, yet still something that they don’t always seem to accomplish.

But the drugs open the floodgates of memory, not because the man has forgotten anything, but because he was never one to tell stories, and certainly not about himself. It is a fascinating story, one that moves to and from the old Jewish neighborhoods of Philadelphia to the concentration camps of WW2 to NASA to a retirement community in Florida, with stops along the way in Operation Paperclip, space booster conventions, Wallkill Prison in NY and the meteoric rise and catastrophic fall of Chabon Scientific Company, where his grandfather crisscrossed the country attempting to pick up the pieces of his son-in-law’s misrepresentations and lies as a way of helping his daughter get back on her feet. He certainly didn’t do it for his son-in-law.. The author’s grandfather was a very busy man.

The parts of the story that stick in the mind, or at least my mind, were the parts about Operation Paperclip and its aftermath. The author’s grandfather was part of what was then a top-secret mission to sweep up as many of the Nazi scientists as possible and give them safe homes and sanitized backstories in the U.S. The intent, of course, was that they could continue their work, and do it for the U.S. and not the Soviet Union. Operation Paperclip, and its “capture” of Wernher Von Braun led directly to the U.S. Space Program. And also to lots of questions later about whether the ends justified the means. Those questions remain unanswered.

The harrowing scenes from this part of the story reminded me a lot of Slaughterhouse-Five. War is always hell.

But unlike in Slaughterhouse, we see more of the story after the war. And somehow the author makes what should have been a mundane life emblematic of the post-war years. It helps that the life he chronicles seems to have been anything but mundane.

And what he learns about his family, and himself, makes him re-think so much of what he always assumed to be true. So do we.

Although I can describe the plot, well, more or less, the power in this book was that while it told me the author’s hidden family stories, it also made me think about my own family. Some of the stories, and certainly some of the circumstances, parallel a tiny bit. And there are hidden stories that changed things upon their reveal. And it made me wonder how much of the circumstances of his grandfather’s life would parallel that of my own parents.

And the Chabon Scientific debacle, whether real or a metaphor, made me dredge up an old memory. The author’s references to the less than savory actions of both his father and his mother’s uncle made me think of something that my family would have said. In the end, they both turned out to be “no-goodniks from no-goodniksville”. And I hear those comments in voices that I have not heard for decades.

One thought on “Review: Moonglow by Michael Chabon”