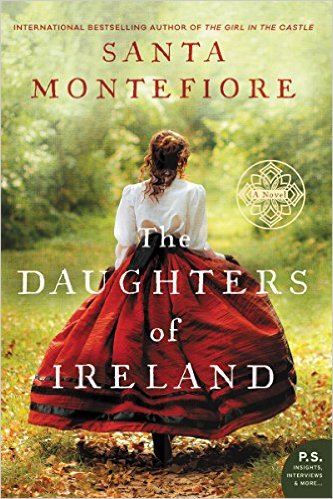 Ireland. 1925.
The war is over. But life will never be the same...
In the green hills of West Cork, Ireland, Castle Deverill has burned to the ground. But young Celia Deverill is determined to see her ruined ancestral home restored to its former glory — to the years when Celia ran through its vast halls with her cousin Kitty and their childhood friend Bridie Doyle.
Kitty herself is raising a young family, but she longs for Jack O’Leary — the long-ago sweetheart she cannot have. And soon Kitty must make a heartbreaking decision, one that could destroy everything she holds dear.
Bridie, once a cook's daughter in Castle Deverill, is now a well-heeled New York City socialite. Yet her celebrity can't erase a past act that haunts her still. Nor can it keep her from seeking revenge upon the woman who wronged her all those years ago.
As these three daughters of Ireland seek to make their way in a world once again beset by dark forces, Santa Montefiore shows us once more why she is one of the best-loved storytellers at work today. 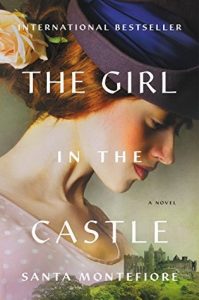 In this second book in the Deverill Chronicles, following last year’s marvelous The Girl in the Castle, the focus shifts from Kitty Deverill to her cousin Celia, as the ownership of Deverill Castle falls out of the hands of the original line and into Celia’s collateral branch – with its better luck and greater fortune.

At least until the fall of 1929, when everybody’s fortunes take a plunge into the depths of the Great Depression.

The story here is still seen through the eyes of the three young women, those daughters of Ireland that we first met in The Girl in the Castle. In that first book, it was Kitty’s story and Kitty’s castle. But times have changed, and now it’s her cousin Celia in extremely proud possession of the family seat.

But the Deverills are cursed, or at least their castle in Ballynakelly in County Cork certainly is. And that’s where the infamous luck of Celia’s father’s, as well as Celia herself, finally crash to the rocks.

As the story begins, Celia has just bought the burned out castle, with her husband’s fortune and a bit of her father’s as well. She throws herself into the restoration with abandon – as well as oodles of Pounds Sterling. She intends to recreate Castle Deverill as she thinks she remembers it from her idyllic memories of her childhood – but it’s much more of a re-imagining than a re-creation. It’s Celia’s vision of what it was, not what it actually was. The heart and soul are no longer quite there.

Just as she is on the brink of believing that she has brought everything back to the way it was, only better of course, her entire world goes smash. While she has been swanning around Europe, buying every expensive trinket that caught her fancy, her husband has been in a state of quiet desperation, watching his fortune disappear into the Stock Market Crash. And rather than face the music, he kills himself. Completing the ruin of all Celia’s hopes and dreams, her father dies scant months later.

And she discovers that her father was not quite the man she thought he was. That underneath his devil’s charm and his devil’s luck, there was a man who danced with the devil to get what he wanted. Celia, in a welter of disillusionment and grief, sets out to discover the truth of the man she revered all her life.

What she found, and how she found it, allows Celia to discover the woman she was meant to be – that underneath her very feathery little head lies a brain every bit as intelligent and ambitious as her father’s. But with a lot more heart.

Escape Rating A-: Either they don’t make them like this anymore, or it’s been a long time since I’ve sunk my teeth into such a juicy family saga. The trials, tribulations and machinations of Downton Abbey have nothing on the Deverills – and this saga isn’t over yet.

The Deverills would be an interesting family (read that as fascinatingly dysfunctional) even without the compelling historical backdrop – but with the major historical events swirling around them – their reactions make for great storytelling.

In The Girl in the Castle those events were the Easter Rising and the Irish War of Independence, as the Anglo-Irish Deverills found themselves on both sides of the Rising, while trusted, in the end, by neither. In this second book, The Daughters of Ireland, the action has moved from the tragedies of the immediate post-WWI period to the next great upheaval – the Depression. And the clouds of WW2 are already gathering on the horizon.

The story in the end is about family, the trials and tribulations, the triumphs and failures, the fissures and the ties that bind – even if sometimes that binding feels like a straitjacket.

As the story began with the childhoods of the three women, now we see them in their 20s and 30s, living with the choices they made long ago, and all of them facing the regrets of the roads not taken. Just at the point where it seems that one of them has found an easy road, instead of facing the envy of the others, they find tragedy instead. Triumphs are always brief, while the tragedies seem endless.

Although parts of the story follow Kitty’s and Bridie’s perspectives, this is Celia’s story. At the beginning, she is not a particularly sympathetic character. She’s not nasty, she’s just selfish, self-centered, and self-indulgent. The universe revolves around her, and her husband and father have both conspired to keep her in a very well-upholstered little bubble. 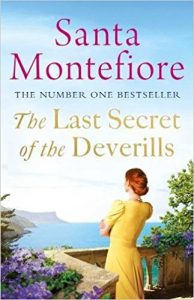 The person she becomes after it all crashes down around her is much more interesting, and much more capable, than anyone imagined – including Celia herself. Her transformation carries the reader along from London to Ballynakelly to Johannesburg, and it’s the making of her.

Whether it also turns out to be the saving of her family from ruin is the story that we shall discover in The Last Secret of the Deverills, which may have an entirely different title by the time it reaches these shores. But whatever the book is called, I bet that last secret is a doozy.

9 thoughts on “Review: The Daughters of Ireland by Santa Montefiore”