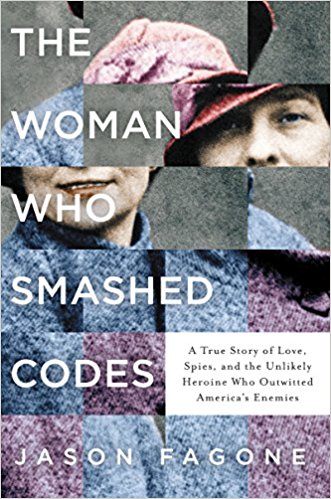 Joining the ranks of Hidden Figures and In the Garden of Beasts, the incredible true story of the greatest codebreaking duo that ever lived, an American woman and her husband who invented the modern science of cryptology together and used it to confront the evils of their time, solving puzzles that unmasked Nazi spies and helped win World War II

In 1912, at the height of World War I, brilliant Shakespeare expert Elizebeth Smith went to work for an eccentric tycoon on his estate outside Chicago. The tycoon had close ties to the U.S. government, and he soon asked Elizebeth to apply her language skills to an exciting new venture: code-breaking. There she met the man who would become her husband, groundbreaking cryptologist William Friedman. Though she and Friedman are in many ways the "Adam and Eve" of the NSA, Elizebeth's story, incredibly, has never been told

In The Woman Who Smashed Codes, Jason Fagone chronicles the life of this extraordinary woman, who played an integral role in our nation's history for forty years. After World War I, Smith used her talents to catch gangsters and smugglers during Prohibition, then accepted a covert mission to discover and expose Nazi spy rings that were spreading like wildfire across South America, advancing ever closer to the United States. As World War II raged, Elizabeth fought a highly classified battle of wits against Hitler's Reich, cracking multiple versions of the Enigma machine used by German spies. Meanwhile, inside an Army vault in Washington, William worked furiously to break Purple, the Japanese version of Enigma--and eventually succeeded, at a terrible cost to his personal life.Fagone unveils America's code-breaking history through the prism of Smith's life, bringing into focus the unforgettable events and colorful personalities that would help shape modern intelligence.

Blending the lively pace and compelling detail that are the hallmarks of Erik Larson's bestsellers with the atmosphere and intensity of The Imitation Game, The Woman Who Smashed Codes is page-turning popular history at its finest.

Once upon a time in the West, a wealthy and charismatic man whisked a young woman off to a luxurious life on his expansive estate.

And even though that sentence is true, this is not that kind of story. Although it is a love story. And a war story. And a spy story.

The man was George Fabyan, a wealthy businessman who had created a kind of scientific and technical utopia on his estate at Riverbank, outside of Geneva Illinois. The town of Geneva still exists, and its location, and its horrible winters, are still exactly as described.

The young woman who was carried from the steps of the Newberry Library in Chicago to Riverbank was Elizebeth Smith, later Elizebeth Smith Friedman. Elizebeth’s career took her from Riverbank to Washington, as she became one of the foundational figures of cryptography and cryptanalysis in America.

Elizebeth Smith Friedman is also one of the many women who played pivotal roles in World War II on both sides of the Atlantic, whose contributions were lost to history. In her case, that loss occurred out of a combination of factors. Sexism certainly played a part. Both Elizebeth and her much more famous husband William were the premier cryptographers of their time. But popular beliefs about women’s brains and women’s places caused many to assume that she was the lesser light, supporting his career, even having some career of her own, but never quite equal.

Her biggest contributions, like those of the codebreakers at Bletchley Park in England, were shrouded in top secret classifications for decades after the war ended, and have only been de-classified in the 21st century.

And finally, while Elizebeth (and William) worked in secluded, top secret government offices, J. Edgar Hoover, the powerful director of the FBI, was under no restrictions about what he said and did, or more importantly, what he said that he and his agency had said and especially done. Hoover was more than happy to take the credit and the accolades that the Friedmans’ could not claim for themselves.

(I have yet to read anything that touches on Hoover and written after his death that does not have plenty of nasty things to say. He clearly had a gift for alienating anyone who had to deal with him in person, while capable of doing a splendid job of what we now call “spin doctoring” with the press and the general population)

Like the women in Hidden Figures, Elizebeth Smith Friedman is an important figure in the history of science in particular, and the history of U.S. in general, whose contributions deserve a giant spotlight.

Elizebeth Smith Friedman was the woman who broke the Nazi Enigma machine code during WWII, which allowed the nascent U.S. intelligence forces in South America to prevent Nazi Germany from creating strongholds within easy reach of the U.S. She, with her pencils and paper and absolutely amazing mind, helped to end the war.

She deserves to be remembered, and this account of her life, pulled together from her own archives and collected correspondence, is a fantastic start.

Reality Rating A+: The Woman Who Smashed Codes is nonfiction, It’s all true and it all happened. But the life of Elizebeth Smith Friedman is also the stuff of which great stories are made. And this particular account of her life is so well-written that it reads like the most compelling piece of fiction. But it’s a true story.

The story reaches out and grabs the reader from the first page, when George Fabyan breezes into the Newberry and asks the young Elizebeth if she will come and spend the night at his estate. It does sound a bit like a romance cliche. But it’s not that kind of invitation.

Instead, Fabyan invites her to join a rather strange project. One of the many scientists working at his estate is a woman who was convinced that Francis Bacon wrote Shakespeare’s plays. While she was (and is) not alone in that particular.theory, her application was a bit different. She was convinced, and had convinced Fabyan, that the truth was revealed in code in the typography of the First Folio. Elizebeth was recruited to assist in breaking this code.

While she eventually came to believe that this particular Bacon/Shakespeare theory was a load of bunk, it did teach both Elizebeth and her future husband William the art and science of codebreaking. A science that they spent the rest of their lives building, expanding, cataloging and most importantly, practicing.

There is a love story here. And what makes the story so interesting, and so relevant, is that the love story between Elizebeth and William is a marriage of equals, and always acknowledged as such by both of them – if not always by the outside world.

And also that the story of Elizebeth’s accomplishments is never overshadowed by that of her husband or her family obligations within the course of this narrative. This is her biography and the tale of her accomplishments and never descends into a family saga. Not that she didn’t also raise two children and often help her husband, but it is refreshing to see a biography of an accomplished woman written in the same manner as that of a similarly accomplished man, with the focus on her career and intellectual achievements.

The story of those achievements is a thrilling ride. She may have fallen accidentally into the field of cryptography, which, after all, did not exist when she began. But once in, she swam strong and swift up the steam, breaking the codes of the organized crime bosses running rum during Prohibition and the Nazis attempting to take over the world in World War II. Her cracking of the Enigma cipher in the U.S. occurred simultaneously and independently of the British crack of the same cipher at Bletchley Park.

She was an amazing woman, and she led an amazing life. She was the founding mother of cryptography in the U.S., and one of the pioneers of all codebreaking in this country, including the creation of the NSA.

The Woman Who Smashed Codes is a marvelously told story of a fascinating life that should be widely read. Anyone who has an interest in the lives of true unsung heroines and/or in the history of cryptography and cryptanalysis in the U.S. will get sucked right into Elizebeth’s story.

3 thoughts on “Review: The Woman Who Smashed Codes by Jason Fagone”