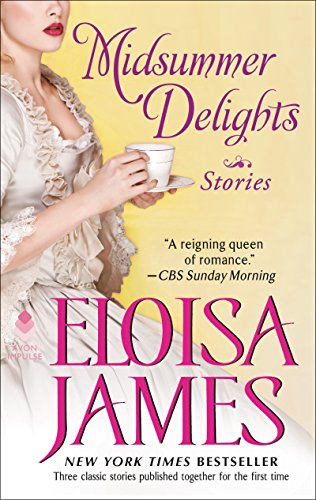 
​Eloisa revisits the ​scintillating world of the Essex Sisters with a story featuring a young lady, Cecilia Bellingworth, who has decided she would rather ruin her reputation than endure further speculation about whether her children will be "silly," like her brother, Billy.​ ​After two failed seasons, ​Cecilia ​decides she ​will dress as she likes​ (in a scandalous red dress!)​ and flirt outrageously​ (with a scandalous pianist!)​. Fortunately, a gorgeous musician at the Duchess of Ormond's house party presents the perfect candidate for scandal…


​Elias Hempleworth-Gray has one thing and one thing only of value—his title, Earl of Leyton. Determined to leave England and the scandal of his gambler father behind, Elias hopes to turn his fortunes around and come back a respectable man to claim the only woman for him, Miss Penelope White. But Penny has other plans for the man she has loved all her life…plans that include a masquerade, a stolen kiss and a lost shoe.

Previously published in the Fairy Tale sampler (print only).


When she was sixteen, Miss Violet Leighton spent one blissful month romping around her family estate with Rothwell Talcott…thirty days of shared kisses, culminating in a very illicit afternoon in a berry patch. As Rothwell leaves for his grand tour, he gives his word of honor that he will return for her. Four years and seven refused proposals later, Violet is about to give up and marry when he finally returns. Now the Duke of Cambridge, Rothwell wants to make her his duchess. But how can Violet trust the man who stole her virtue—and then broke her heart?

Previously published in The Ugly Duchess (print only).

This will be a short and sweet review of three short and very sweet (also slightly naughty) historical romances.

All three of these stories have been published before, but in separate collections. And while they all hearken back to earlier series, all three also have something in common.

One of the dilemmas of romances in short stories is that they can easily smack of insta-love – especially if one is hoping for a happily ever after. In the case of these three stories, the author has worked around that problem by making these, not exactly second chances at love, but returns to, or reveals of, an existing love that is quickly re-established in the course of the story.

In A Midsummer Night’s Disgrace, the heroine has had enough of pretending to be the perfect debutante. While not exactly on the shelf yet, she really wants to be relegated to that shelf, so she can retire to the country and pursue her musical studies. If she had been born male, she would be able to take lessons and possibly even be a musician, but it is deemed unladylike and inappropriate for her female self.

She plans on seducing, or being seduced by, the marvelous and utterly gorgeous piano player at the house party she is attending, only to discover that the mysterious pianist is actually the very well grown up version of the boy who used to put grasshoppers down her dress when they were children. And that he can give her all the music her heart desires.

At Midnight is the story of a young man with a prestigious title and pockets to let, courtesy of a father who gambled away just about everything else the family owned. He loves the young woman whose father bought his former patrimony, but is unwilling to ask for her hand and let it be said that he is only marrying her for the land he once called home. It takes the contrivance of their friends, along with the seeming anonymity of a masquerade ball, for the course of true love to find its way.

Ever After, like A Midsummer Night’s Disgrace, is also the story of a young woman who has turned down all her suitors. But in this case, it’s because none of them measure up to the young man she fell in love with when she was 16. At the time, she believed that he loved her in return, but he has been out of the country for four years and she has received only two letters in all that time. She’s sure he’s moved on, and equally sure that no one else will ever replace him in her heart. Then he arrives, in the middle of a ton ball where she is dodging yet more suitors, and literally carries her off to plead his case. She shouldn’t forgive him, but of course she does.

Escape Rating B: These stories are all, as I said at the top, short and sweet, with just a touch of naughty. In spite of their brief length, each one does a fairly good job of establishing its characters and the connection between them without making it feel like insta-love.

For readers who are familiar with the series from which each story came, I’m sure that it is an extra treat to see familiar characters in the background. But for those who are not, as I am, each story is surprisingly complete within itself, especially considering their brevity.

In addition to these little confections, the book also includes a teaser first chapter for the next book in the Wildes of Ludlow Castle series, Too Wilde to Wed. This teaser is a real tease! I loved the first book in the series, Wilde in Love, and was already looking forward to the next book. Having read the first chapter, now I know that May is much too far away. I want it now!

LINK: https://goo.gl/gfG1vy
GIVEAWAY TERMS & CONDITIONS: Open to US shipping addresses only. Two winners will each receive a paperback copy of A Kiss At Midnight by Eloisa James. This giveaway is administered by Pure Textuality PR on behalf of Avon Romance. Giveaway ends 2/10/2018 @ 11:59pm EST. Avon Romance will send the winning copies out to the winner directly. Limit one entry per reader and mailing address. Duplicates will be deleted. 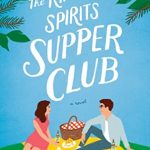 One thought on “Review: Midsummer Delights by Eloisa James + Giveaway”