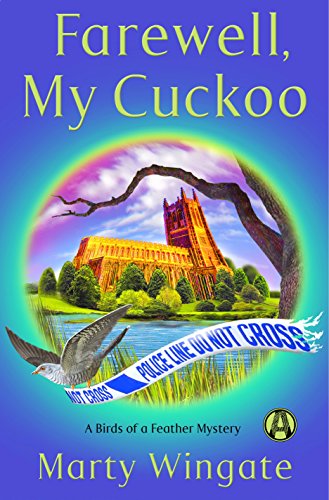 Julia Lanchester must defend her love nest from an invasive species: her boyfriend’s sister. And then there’s the little matter of murder . . .

“The cuckoo comes in April and sings its song in May. In June it changes tune and July it flies away.”

Wedding bells are ringing in the small British village of Smeaton-under-Lyme. Julia Lanchester’s second-in-command at the local tourist center is finally getting married, and the lovebirds are giving Julia and her live-in boyfriend, Michael Sedgwick, ideas about their own future. But before anyone can say “Will you,” Michael’s flighty older sister, Pammy, crashes the party, fresh off a breakup and lugging all her worldly possessions around with her in a tangle of plastic bags.

Before long, Julia’s cozy cottage starts feeling more like Pammy’s bachelorette pad. To keep herself from going cuckoo, Julia throws herself into her pet projects at work—until death disrupts her plans. First a body is found on the estate. Then the police discover that Pammy was the last one to see the man alive. And soon Julia gets the feeling that if she ever wants her home—or her boyfriend—back, she’ll have to get to the bottom of this mystery, even if it means breaking a few eggs.

For every single relationship that has hit the rocks over a cheating spouse, an economic pitfall or irreconcilable differences, there are probably at least two that have come to a sad end because of a relative, on one side or the other, who is incapable of properly parsing the sentence, “Here’s your hat, what’s your hurry?” and just won’t leave – along with the person in the relationship who seems to be incapable of making them leave long after they’ve worn out whatever reluctant welcome they had in the first place. 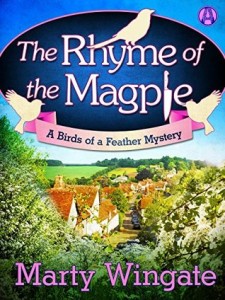 In the case of Farewell My Cuckoo, it’s Michael’s irresponsible sister Pammy who has become the cuckoo in Julia and Michael’s rather tiny little cottage nest in Smeaton-under-Lyme. To the point where I half-expected Pammy to become the corpse in this entry in the series, with Julia as the prime suspect. (For more background on Julia, Michael and Smeaton-under-Lyme, start with the first book in the series, The Rhyme of the Magpie)

Instead, the mystery takes a different path, as an unidentified man is found dead near a local pond. While no one knows exactly who he is, it turns out that there are plenty of people in the village who had at least a nodding acquaintance with “Bob”, even though no one seems to know any of the truly pertinent facts about the man, like his full name, or even where he was staying. If he was staying.

Julia, along with her friend Willow and more than a bit of help from a tourist visitor as well as the seemingly immovable Pammy, can’t resist looking into Bob’s identity and what brought him to live “rough” somewhere in the neighborhood.

Nor can she resist poking her nose into other local mysteries, especially the fervent pursuit of her friend Nuala by a rude and unwelcome stranger who seems to be able to turn on the charm when he needs to get his way. A stranger who seems perfectly willing to mislead Nuala about his own marital status in order to worm his way into her bakery and teashop business. And who has a surprising connection to the late, lamented Bob.

Possibly even a connection worth killing for.

Escape Rating B: For a series that centers around birds, the mysteries are salted with a surprising number of tasty red herrings. It is all too easy to understand why Julia’s amateur sleuthing so often leads her astray – because the reader is right there with her.

Not that some of those false leads don’t uncover important little mysteries of their own, even if their pursuit takes Julia away from the central problem.

As a cozy mystery, Julia’s amateur investigations often take her deep into the heart of village life, and Farewell My Cuckoo is no exception. Poor dead Bob leads not only to his killer, but also to the breakup of a marriage and a dubious business proposition, as well as to a villager who has gone off the rails and to the final, sad end of a long-lost love.

A lot happens, and it is all, in its way, fascinating. But the central problem remains throughout the story, and it isn’t poor Bob’s corpse and how it got there, although it should be. A lot of time is taken up with Pammy and her interloping. The reader will gnash their teeth at the way that both Julia and Michael switch from enabling Pammy’s behavior to her face while vocally resenting it behind her back. And this reader at least was gnashing right beside them.

Julia’s solutions to the mysteries that she comes across are generally interesting and her investigations are often quite a lot of fun. She does, unfortunately, have a penchant both for finding herself in uncomfortable personal situations and getting herself and her helpers into deadly danger, and Farewell My Cuckoo was no exception on either front.

As much as they sometimes drive me a bit crazy, I really like both of this author’s heroines, and find them easy to identify with and fun to follow. But I’ll confess that Pru Parke of the Potting Shed series is my favorite, so I’m really looking forward to the next book that series, Midsummer Mayhem, coming in November.

April 9 – View from the Birdhouse – SPOTLIGHT