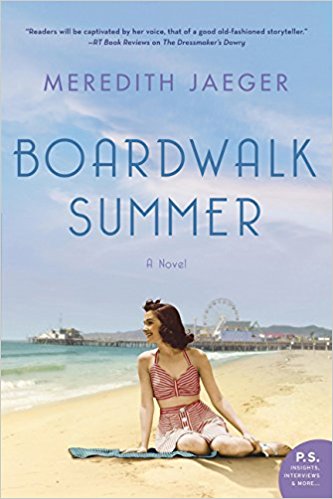 In this new novel from the author of The Dressmaker’s Dowry, two young women two generations apart discover the joy and heartbreak of following their dreams. Aspiring Hollywood actress Violet makes a shocking choice in 1940, and seventy years later, Mari sets out to discover what happened on that long ago summer.

Santa Cruz, Summer 1940: When auburn-haired Violet Harcourt is crowned Miss California on the boardwalk of her hometown, she knows she is one step closer to her cherished dream: a Hollywood screen test. But Violet’s victory comes with a price—discord in her seemingly perfect marriage—and she grapples with how much more she is willing to pay.

Summer 2007: Single mother Marisol Cruz lives with her parents in the charming beach cottage that belonged to her grandfather, Ricardo, once a famed performer on the Santa Cruz Beach Boardwalk. Drawn to the town’s local history and the quaint gazebo where her grandparents danced beneath the stars, Mari sells raffle tickets at the Beach Boardwalk Centennial Celebration, and meets Jason, a California transplant from Chicago.

When Mari discovers the obituary of Violet Harcourt, a beauty queen who died too young, she and Jason are sent on a journey together that will uncover her grandfather’s lifelong secret—his connection to Violet—a story of tragedy and courage that will forever transform them.

At times, Boardwalk Summer is as wild and rollicking a ride as the old wooden roller coaster that stands proudly on the Santa Cruz Boardwalk.

And at other times, it is the quietly beautiful story of two women who are connected across the years by their relationships with two extremely different men – but not in the way that the reader at first thinks.

And it’s about apples that both do and don’t fall far from one very twisted tree.

In 1940 Violet Harcourt is a 20-year-old woman married to an abusive husband. Her dreams may be dying but are not quite dead. In 2007, Marisol Cruz is a 25-year-old single mother who had to put her own dreams to sleep when she discovered she was pregnant after a drunken one-night stand.

Violet’s story seems like a tragedy. It is impossible not to feel for her plight, while at the same time her situation makes for hard reading. Her husband is an abuser, and she’s finally figured out that he’s only going to get worse. So she escapes, only to discover that her dreams of Hollywood glory are even more out of reach than her dreams of a happy marriage.

When her husband finds her and takes her back to Santa Cruz, we know that she’s done for – and so does she.

Marisol, on the other hand, is doing the best she can in a situation that she fully recognizes is of her own making. She had dreams of graduate school, only to bury those dreams completely when her celebratory one-night stand after her college graduation resulted in pregnancy. Little Lily is the light of Mari’s life. With the help of her parents, they are getting by. But as much as she loves her daughter, she misses the life of the mind she’d planned on having.

A new guy in town helps her see that her dreams don’t have to wait forever. While they tentatively explore a relationship, Mari jumps with both feet into the process to secure a small local history grant and hopefully save a local landmark from the wrecking ball.

Her quest to thwart the developers and uncover the mystery behind Violet Harcourt’s death uncovers a whole host of family secrets – and puts Mari squarely in opposition to the father of her little girl.

But the more she digs, the less she discovers that she truly knows. And that what everybody believes ain’t necessarily so.

Escape Rating A-: At first, I had a difficult time with this story. Violet’s marriage is so obviously a tragedy, and one that we’ve seen all too often in both fiction and real life. Her husband is an abuser who has systematically stripped her of her dreams and her friends. He wants her dependent and broken, and she’s on the way there – until she breaks out. It’s hard to read her story as her situation goes from bad to worse to desperately worse. The twist at the end is a surprise, a redemption and a delight.

Mari’s story is a lot more straightforward, and it’s fortunate that we follow Mari’s story more than Violet. The sperm donor of Mari’s baby is a douchecanoe, but he’s not, thank dog, actually her douchecanoe. They never had a relationship and Mari doesn’t want one. Her only real regret at the whole mess is that he refused to have any relationship with Lily.

Mari and Lily, with the help of her parents, are doing just fine. But Mari is ready to do more than just get by when Jacob comes to Santa Cruz and enters her life.

The heart of the story turns out to be Mari’s quest to save the historic but neglected gazebo at the end of the Boardward from the developer’s wrecking ball. That gazebo has history, and it’s Mari’s history. Not just that her beloved grandfather and grandmother were married under the gazebo, but that it was a center of cultural life and entertainment for the Latinx citizens of Santa Cruz back in the day when Mari’s people were not welcome at many venues in the community controlled by the wealthy white families.

Families like that of Violet Harcourt’s violent husband. And Mari’s little girl’s sperm donor. That Trevor Harcourt is behind the developers planning to tear down the gazebo and build expensive condos to block the waterfront is no surprise. That apple did not fall far from his grandfather’s twisted tree.

But it’s Mari’s research into the history of the gazebo and the way that her family’s own history is intertwined with it that brings the story full circle, solves the old mystery and gives the story its heart and soul.

And finally earns her that happy ending – and not just her own.