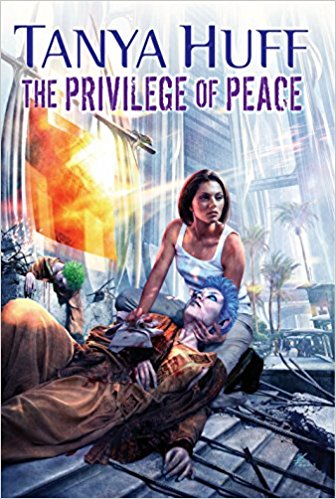 Former space marine Torin Kerr returns for one final adventure to save the Confederation in the last book in the military science fiction Peacekeeper trilogy.

Warden Torin Kerr has put her past behind her and built a life away from the war and everything that meant. From the good, from the bad. From the heroics, from the betrayal. She's created a place and purpose for others like her, a way to use their training for the good of the Confederation. She has friends, family, purpose.

Unfortunately, her past refuses to grant her the same absolution. Big Yellow, the ship form of the plastic aliens responsible for the war, returns. The Silsviss test the strength of the Confederation. Torin has to be Gunnery Sergeant Kerr once again and find a way to keep the peace.

If this is truly the end of ex-Gunnery Sergeant now Warden Torin Kerr’s story, I’m going to be very, very sad to see it end. Torin’s story, from its beginning all the way back in Valor’s Choice (nearly 20 years ago, OMG) has been absolutely marvelous.

And they both feature kick-ass, strong, idiosyncratic heroines in vast interstellar space operas. The biggest difference is that Vatta’s War and its sequel series Vatta’s Peace are mercantile space opera, while Confederation/Peacekeeper is strictly military SF. 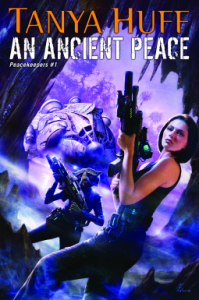 Torin Kerr begins the series as a Sergeant in the Confederation Marines, and even though at the end of the Confederation series she does manage to retire the sergeant from the Marine Corps, as we, she and her crew discover in An Ancient Peace, the first book in the Peacekeeper sequel series, it is impossible to take the Marine out of the sergeant.

Even in what passes for peacetime, she’s still the Gunny. Mostly. When it counts.

The Privilege of Peace picks up almost immediately after A Peace Divided leaves off. Which means that this is not the place to start. And as much as I loved An Ancient Peace, the first book in the Peacekeeper series, I don’t think that’s the place to start, either. Because this peace, and the characters’ reactions to it, all depend on who and what they were during the late war, and what their relationships to Torin Kerr were during that war. If you enjoy military SF with great characters, terrific world-building and absolutely fantastic heroines, start at the beginning with Valor’s Choice.

And I envy anyone who does a binge-read to “earn” The Privilege of Peace. I’ve read the entire series, but as it was published. Which means that the details of Torin’s history happened even longer ago for me than they do for her. It took awhile for me to get back up to speed on all the names, faces, races, and reasons behind each character’s inclusion in this conclusion.

Because of that “ramp-up” time, the story seemed a bit choppy at points. Lots of characters have similar names, the reader is expected to remember all of their backstory, and the action jumps around a bit. It takes a while to set up the big showdown with “Big Yellow” and the Humans First pukes.

“Big Yellow” turned out to be the enemy of the entire Confederation series. And while the threat of them returning has hung over all of the Peacekeeper series, in Privilege they really are back, and no one is happy about it. But at least now everyone knows that Big Yellow is the big enemy, even if they can’t always recognize its “minions” when they appear. Or disappear. Or hide in plain sight.

That second enemy is the home-grown variety. Humans First will sound familiar in entirely too many contemporary 21st Century ways. They believe that Humans are better than every other race in the galaxy and that the Confederation is holding them back from their greatness. They also believe that violence – along with infiltration and blackmail and other nastinesses – are the way to take their rightful place in the galaxy.

The idea that humans will carry their xenophobia into the stars is more than a bit depressing, but feels all too possible.

Torin and her friends are, as usual, stuck in the middle, caught between the manipulations of Big Yellow, the violence of Humans First, the mind-numbing insanity of Confederation bureaucracy and the secret dreams of the Confederation military.

Peace is a privilege that has to be earned. And as usual, Torin Kerr and her companions are paying for that privilege with their own blood, sweat and hopefully not too many tears.

Escape Rating B: I loved traveling with Torin and Company one more time. Not having just finished a binge of the entire series, it did take a while for me to catch back up, and the longer it has been since the beginning and the more that has happened since that beginning, the longer it seems to take with each book.

The multiple perspectives in The Privilege of Peace made the story seem a bit disjointed at times, but I still liked the journey and felt that the ending was earned. Which means I can only recommend this book to fans of the series. And I still think it is well worth reading the entire series.

The blurbs claim that this is the conclusion of Torin’s journey. If so, I’m sorry to see her go and I’ll miss traveling with her, but she has certainly earned her happy ending. And it is a happy ending – or at least as happy as Torin can manage.

At the same time, there are enough loose, or at least loose-ish, ends that it would be possible for the adventures to continue. And if that occurs, I’ll be glad to watch the Gunny kick more ass and take more names. Anytime. Anyplace. Any galaxy.

2 thoughts on “Review: The Privilege of Peace by Tanya Huff”