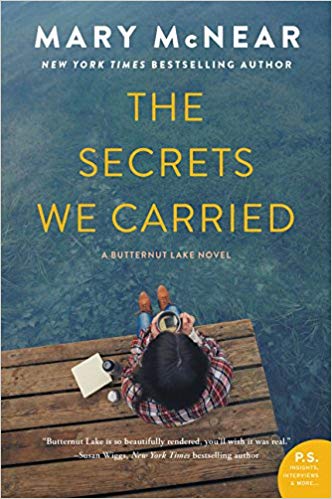 Readers who love Susan Wiggs and Susan Mallery will adore New York Times bestselling author Mary McNear newest novel. A young woman travels home to Butternut Lake, confronting her past and the tragedy she and her friends have silently carried with them for over a decade while also facing an unknown future.

Butternut Lake is an idyllic place—but for one woman, her return to the lake town she once called home is bittersweet…

Sometimes life changes in an instant.

Quinn LaPointe grew up on beautiful Butternut Lake, safe, secure, sure of her future. But after a high school tragedy, she left for college and never looked back. Becoming a successful writer in Chicago, she worked to keep out the dark memories of an accident that upended her life. But now, after ten years, she’s finally returned home.

Butternut is the same, and yet everything is changed. Gabriel Shipp, once her very best friend, doesn’t want anything to do with her. The charming guy she remembers is now brooding and withdrawn. Tanner Lightman, the seductive brother of her late boyfriend, wants her to stick around. Annika Bergstrom, an old classmate who once hated Quinn, is now friendly. Everyone, it seems, has a secret.

Determined to come to terms with the tragedy and rebuild old relationships, Quinn settles into Loon Bay Cabins, a rustic but cozy lakeside resort, where she begins writing down her memories of the year before the accident. Her journey though the past leads her to some surprising discoveries about the present. As secrets are revealed and a new love emerges, Quinn finds that understanding the past is the key to the future.

In my reviews of previous books in the Butternut Lake series I have said that Butternut Lake should be renamed “Second Chance Lake” because those stories have featured a second chance at love for the hero, the heroine, or both.

The Secrets We Carried does not follow the pattern of the previous books, and there’s nothing to keep a reader from starting here and deciding if you like the place and want to go back. I definitely like the place. A lot.

But this story is still about second chances. In the end, there’s even a second chance at love – but that is not the kind of second chance that is the centerpiece of this particular story.

In her life post-Butternut Lake, she has kept moving forward, but she hasn’t moved on. An anonymous invitation to the dedication of a memorial to the accident, and the three young men who needlessly, recklessly, stupidly died in it, gives her the chance to take herself back to the place she once called home.

Quinn needs to let go of her past, so that she can finally claim her future.

Escape Rating A: I wasn’t in the mood for a romance, and that turned out to be an excellent thing. In spite of the way that the blurb reads, and contrary to the previous books in this series, The Secrets We Carried is not a romance.

Instead, this book is more of a character study, crossed with more than a bit of “women’s fiction”. In other words, if a man had written this story, it would just be labeled “fiction”.

I digress – but mostly because I just finished this book and I’m still reeling a bit. This was absolutely marvelous – especially because it wasn’t what I expected. It went a whole lot deeper than that.

Quinn’s high school career ended in tragedy. Her boyfriend and his two best friends drowned in Butternut Lake under the stupidest of circumstances. Jake Lightman was drunk and so were his buddies. Jake drove his truck out onto the frozen surface of Butternut Lake one night in the late spring and just sat there, in the truck, until the ice gave way and the three young men drowned.

Quinn blames herself. She broke up with Jake that night because she caught him lying to her, and not for the first time. She believes that he drank so heavily because of their breakup, and that he was out in the middle of the lake because she told him that’s where she lost the promise ring he gave her.

So Quinn comes to Butternut Lake for the dedication of the memorial to his death, and the deaths of his friends.

But Quinn isn’t the only person who has spent the past ten years heaping blame on herself for the events of that long ago night. Or rather, a night that should be long ago but seems to be ever-present as Quinn decides to stay in Butternut Lake and finally process the events of that night by writing all of her memories.

As part of her “memory writing” she touches base with not just the events but also the people who were part of that time, and who, it turns out, also have not been able to let things go. The deeper Quinn digs, the more she discovers that there is plenty of guilt to go around.

And like so many burdens, once that guilt is shared, once all of the people who touched and were touched by those events lays out the part that they each feel they played that night, they reach, tentatively and together, for a truth that was hidden by the secrets they all carried. A burden shared is a burden halved. A burden shared by as many people as have a share in this one lightens their load, and their lives, to the point where they can put the past behind them. Forgive themselves but never forget.

This is a beautiful story where the only way forward is through. Everyone holds back and everyone hides pieces of themselves that have come to hurt to much to be revealed. Quinn’s need to get it all out there, at least in her own mind, conflicts deeply and realistically with her desire to bury it all as deeply as possible.

The ending, when Quinn finally reaches it, goes all the way back to the beginning. And it sets her free.

2 thoughts on “Review: The Secrets We Carried by Mary McNear”