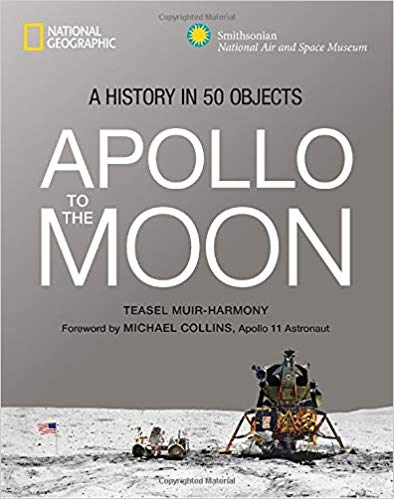 A celebration of the 50th anniversary of NASA's Apollo missions to the moon, this narrative uses 50 key artifacts from the Smithsonian archives to tell the story of the groundbreaking space exploration program.

Bold photographs, fascinating graphics, and engaging stories commemorate the 20th century's most important space endeavor: NASA's Apollo program to reach the moon. From the lunar rover and a survival kit to space food and moon rocks, it's a carefully curated array of objects--complete with intriguing back stories and profiles of key participants.

This book showcases the historic space exploration program that landed humans on the moon, advanced the world's capabilities for space travel, and revolutionized our sense of humanity's place in the universe. Each historic accomplishment is symbolized by a different object, from a Russian stamp honoring Yuri Gagarin and plastic astronaut action figures to the Apollo 11 command module, piloted by Michael Collins as Armstrong and Aldrin made the first moonwalk, together with the monumental art inspired by these moon missions. Throughout, Apollo to the Moon also tells the story of people who made the journey possible: the heroic astronauts as well as their supporters, including President John F. Kennedy, newsman Walter Cronkite, and NASA scientists such as Margaret Hamilton.

It is very rare for me these days to read a book in print – but for this I’m glad that I made the exception. It’s gorgeous, in its own geeky-techie-nostalgic way, and I am glad to have it on my shelves to pick up and dip into, over and over again.

Reading these descriptions, accompanied by the carefully chosen pictures, gave this reader the feeling that I was touring the museum with the best tour guide in the universe standing at my elbow, telling me everything I wanted to know.

I kind of wish I’d had this book when I listened to Apollo 8 by Jeffrey Kluger, because these artifacts provide the perfect images to go along with the story as it played in my ears. I think this book could serve as the “accompanying illustrations” for many books about the Apollo Program.

The explanations that go with each picture of each artifact, explaining what it is, what it was for, and most importantly, who designed or created it and who they were and what brought them to the Space Program, brings to light, and back to life, the entire decade of the “Space Race” that put men on the the surface of the Moon.

The sheer scope of the project will make any reader wonder how we managed to accomplish so much in so short a time – and what a waste it is that we not only have not managed to capitalize on those achievements, but that we seemed to have actively turned away from the belief in the power of science that made the journey possible.

Reality Rating A-: I’m tempted to call this an “Escape” rating, or at least to wish that it was. Because I feel like we should be continuing the journey to escape this planet – and we’re not. It feels as if we are about as far from that possibility as we could be, with so many people refusing to believe in science, in the real science that both fueled and was fueled by the Space Program.

This is not a book with a continuous narrative – except the one in my head that says that we should have kept reaching outward. Instead we drew back, and are now amazed that a project this big and this long managed to not only get started but actually successfully completed. And then it petered out.

If you read science fiction, or science fact, have a “thing” for the space program (as I do) or just wish that we were still reaching for that “final frontier”, this book will fill you with nostalgia and sorrow.

But at least this book, and the artifacts that it so accurately and lovingly describes, will remain to speak to the future.

2 thoughts on “Review: Apollo to the Moon by Teasel E. Muir-Harmony”