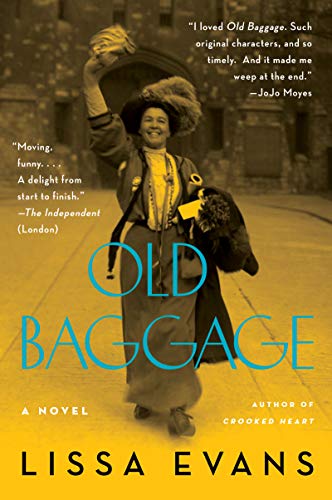 The author of the acclaimed Crooked Heart returns with a comic, charming, and surprisingly timely portrait of a once pioneering suffragette trying to find her new passion in post-WWI era London.

1928. Riffling through a cupboard, Matilda Simpkin comes across a small wooden club—an old possession that she hasn’t seen for more than a decade. Immediately, memories come flooding back to Mattie—memories of a thrilling past, which only further serve to remind her of her chafingly uneventful present. During the Women's Suffrage Campaign, she was a militant who was jailed five times and never missed an opportunity to return to the fray. Now in middle age, the closest she gets to the excitement of her old life is the occasional lecture on the legacy of the militant movement.

After running into an old suffragette comrade who has committed herself to the wave of Fascism, Mattie realizes there is a new cause she needs to fight for and turns her focus to a new generation of women. Thus the Amazons are formed, a group created to give girls a place to not only exercise their bodies but their minds, and ignite in young women a much-needed interest in the world around them. But when a new girl joins the group, sending Mattie’s past crashing into her present, every principle Mattie has ever stood for is threatened.

Old Baggage is a funny and bittersweet portrait of a woman who has never given up the fight and the young women who are just discovering it.

I’ve just realized that the title of this book is a bit of a pun. The main character, Mattie Simpkin, is referred to as an “old baggage”, meaning a cantankerous old woman. But the point of this story is that she is also carrying a lot of “old baggage”, as in emotional baggage. And that the old baggage actually isn’t carrying her old baggage terribly well, leading to the crisis point in the story.

Mattie is also fond of sprinkling her speech with quotations from authors, historians and philosophers. There’s one that’s used in the book, and is extremely appropriate to the story, even if there seems to be some debate on who originated it.

“It is never too late to be what you might have been.” And so it proves for Mattie Simpkin.

At first, this seemed to be a simple story about someone whose glory days were long behind them – and that same person’s inability to cope with that fact. But it’s not nearly that simple.

As the story begins, it’s 1928. Mattie is in her late 50s, and while she may not think of herself as old, it’s clear that others around her do. (I found this poignant and ironic at the same time as I’m older than Mattie but don’t see myself that way at all. It’s true that “old” starts at least 15 years past one’s own age)

Once upon a time, Mattie was one of the celebrated (and frequently derided) suffragists that marched, agitated and were jailed to goad the powers-that-were to grant women in Britain the right to vote. (It wasn’t any better in the U.S.)

The right was granted, under rather stringent conditions, in 1918 in the exhausted aftermath of World War I. At which point the movement towards women’s equality collapsed. (If this sounds familiar, let’s just say the pattern repeats).

But Mattie has never given up the fight, and ten years later she is still on the lecture circuit, attempting to enlist a new generation of women into the cause. She’s failing, and her lectures are increasingly poorly attended.

The situation changes when an old frenemy comes back into her life, and Mattie is galvanized into bringing young girls of her present some of the same educational and recreational experiences that formed her character. The problem is that her frenemy is plumping for the nascent Nazi party.

And Mattie’s need to prove herself to someone who has never had any intention but to bring her down and keep her there has no end of bad consequences. For Mattie, for her best friend Florrie, and especially for the girls and young women they have taken under their wings.

Escape Rating B+: At first, it didn’t seem like a whole lot happened in this book. Looking back on it, not a whole lot does – at least not in the sense of groundbreaking or earthshaking adventure. But there is plenty of drama underneath the quiet surface.

Initially, Mattie seems like somewhat of a comic figure. She’s an old battle axe who doesn’t seem to recognize that it’s time to put the axe up on the wall. While her mannerisms can be amusing, and her stubbornness is plenty infuriating to her friends and neighbors, she’s also right. Those two things don’t cancel each other out.

The cause was not won, only placated a bit. The fight was not over. Women were not equal. (They still aren’t) But Mattie’s methods don’t do her any favors, and she alienates as many people as she convinces. Probably alienates more people than she convinces.

The quiet drama in the story is the way that Mattie gets led astray, not so much from her cause as from her bedrock straightforward way of going about it.

Because while Mattie may be an old baggage, there are also a couple of nasty pieces of baggage who are deliberately, or not so deliberately, undermining her efforts. And her sense of self is what suffers along the way.

It’s when she finally comes back to herself that she is finally offered that opportunity to be what she might have been. And it’s her redemption that she takes it.

In the end, Old Baggage was nothing like I expected. But it was a charming read every step of the way.

Review: Birds of a Feather by Jacqueline Winspear
When a Man Loves a Woman