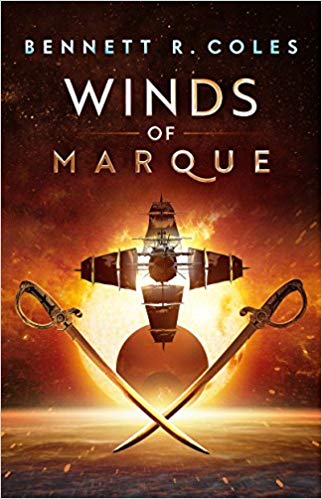 "Bennett R. Coles ranks among my go-to list in SF. Entertaining and intelligent storytelling and terrific characters. In Winds of Marque, Coles may well have invented a whole new subgenre that has me scrambling for a description--Steam Space?  Whatever you call it, a blast to read. Here's hoping that many more adventures are in the offing for Blackwood and company."  —Steven Erikson, New York Times bestselling author

The first novel in an exciting science fiction series—Master and Commander in space—a swashbuckling space adventure in which a crew of misfit individuals in the king’s navy are sent to dismantle a dangerous ring of pirate raiders.

In a dense star cluster, the solar winds blow fiercely. The star sailing ship HMSS Daring is running at full sheet with a letter of marque allowing them to capture enemy vessels involved in illegal trading. Sailing under a false flag to protect the ship and its mission, Daring’s crew must gather intelligence that will lead them to the pirates’ base.

But their mission is threatened from within their own ranks when Daring’s enigmatic captain makes a series of questionable choices, and rumblings of discontent start bubbling up from below decks, putting the crew on edge and destroying morale. On top of it all, Liam and Amelia must grapple with their growing feelings for each other.

Facing danger from unexpected quarters that could steer the expedition off course, Blackwood and Virtue must identify the real enemy threat and discover the truth about their commander—and their mission—before Daring falls prey to the very pirates she’s meant to be tracking.

The blurbs and the reviews for this book say the same two things fairly consistently. One, that it’s a whole lot of fun. Two, that it’s Aubrey and Maturin (Master and Commander) in space.

The first thing is definitely true. Winds of Marque is a whole lot of fun. I’m a bit less sure about the second thing – and I’m saying that as someone who read the entire Aubrey and Maturin series.

What makes this so much fun is that it is a romp of swashbuckling derring-do, but set in space in the distant future – on a Navy ship under letters of marque (government-licensed piracy) with a mission to find the real pirates and wipe them out before humans end up in a war with the insect-like Sectoids.

Our plucky heroes are Subcommander Liam Blackwood and Petty Officer Amelia Virtue. Fraternizing between the ranks is about to become the least of their problems.

Blackwood, second-son of the nobility and Executive Office (XO) of the HMSS Daring, has a reputation for coddling, chivying and generally outmaneuvering dunderheaded noble Captains so that they manage not to kill their entire crews in acts of noble idiocy. He’s unfortunately good at his job – because it’s bad for his career. Someone has to take the blame for the untouchable nobles’ disasters, and it’s generally their frustrated XO.

Virtue is the newly promoted quartermaster of the Daring. She’s relatively young, hyper-competent, and has the combined duty of making sure the Daring is fully supplied without resorting to Naval stores while instructing Blackwood in just how different the life of a commoner ranking sailor is from that of even a second-born noble son.

It’s probably going to be the making of him, if they survive the mess they are currently in.

Because nothing about their mission is exactly what it seems. Not the inexperienced but not unintelligent Captain Lady Sophia Riverton, not the pirates and certainly not the Sectoids.

That there’s a noble fop on board who is just dead certain that he can do everything better than his Naval superiors but social inferiors is nearly the deadly icing on a very explosive cake.

And it’s a blast from beginning to end.

Escape Rating B+: I had a great time while I was reading this. The verve and drive of the narrative really sweeps the reader along. But, I’m not sure how well it holds up upon further reflection. Not that I won’t pick up the next book in the series when it comes out. I did have a great time.

Part of the problem for this reader may be in all those comparisons to the Aubrey and Maturin series. Which was marvelous and excellent and terrific and if you enjoy naval stories or Napoleonic war stories is highly recommended. The audio is particularly good.

One issue, at least so far, is that Blackwood is not analogous to Aubrey (neither is Riverton) and there is no Maturin, at least so far. And that one aspect of the story, the Napoleonic wars in space, has been done before by David Weber in the Honor Harrington series. (It’s also been done in fantasy in the Temeraire series by Naomi Novik!)

Where it is similar to the Aubrey and Maturin series is in its detailed descriptions of the working of the ship. That the Daring is a ship powered by “solar sails” makes that resemblance more pronounced, but also a bit out of place. I’m not sure whether it’s that we’ve become so used to FTL (Faster Than Light) ships being sleek and powered internally that solar sails feel less possible (not that FTL drives in general are possible at the present) or that the whole “sailing” aspect feels like an artificial way for the author to insert sailing jargon and terminology that would not otherwise be present.

One aspect of the story, although not the primary aspect, is the developing romance between Blackwood and Virtue. As much as I like both characters, there doesn’t feel like there’s enough there to sell the romance. While it does take a reasonable amount of time for them to fall in love, because the story is told from Blackwood’s perspective we don’t see enough of Virtue’s thought processes to “feel” their romance. It’s a not nearly enough significant glances and conversations about ship’s business that fall into bed – or rather office floor at a crisis point.

Although this is a navy that has given up on anti-fraternization regulations, these are people from two different worlds that don’t mix. If they are going to be together, there need to be a whole lot more conversations about how that’s going to work. Because what Virtue tells Blackwood is correct – as a noble he can do anything at all to her, up to and possibly including murder but certainly including rape and assault – and he will never be punished because he’s a member of the aristocracy and she’s a commoner. That power imbalance is going to require one hell of a reckoning at some point.

The book this reminds me of the most is The Guns Above by Robyn Bennis. That book incorporates its equivalent ship jargon much more smoothly. Transferring the terminology of sailing vessels to an airship that sails the air felt smoother even if the war they are flying in is just as deadly. That story also includes a noble fop, but that one manages to get better – if not less foppish – as the adventure goes along.

The situation that the Daring finds herself in is a well-worn and well-loved trope. The ship of misfit naval personnel go rogue with official sanction but no official backing to do a job that desperately needs to be done – but that no one in the official navy wants to be caught dirtying their hands to actually get done. If they complete their mission someone else will get the glory, but if they fail the survivors will take all the blame.

And it’s so much fun that none of them can resist signing up for another mission. Readers won’t be resisting either!