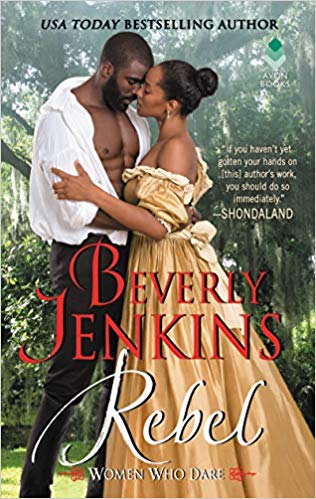 Valinda Lacey's mission in the steamy heart of New Orleans is to help the newly emancipated community survive and flourish. But soon she discovers that here, freedom can also mean danger. When thugs destroy the school she has set up and then target her, Valinda runs for her life—and straight into the arms of Captain Drake LeVeq.

As an architect from an old New Orleans family, Drake has a deeply personal interest in rebuilding the city. Raised by strong women, he recognizes Valinda's determination. And he can't stop admiring—or wanting—her. But when Valinda's father demands she return home to marry a man she doesn't love, her daring rebellion draws Drake into an irresistible intrigue.

Considering that a big part of the romance in this book is all about Drake LeVeq persuading Valinda Lacey to let her inner hellion out of the straight-jacket her father has tried to wrap it in, this book would have been better titled Hellion than Rebel.

And that’s about the only quibble I have with this book. It is simply marvelous from beginning to end. Sometimes heartbreaking, but marvelous every step of the way.

(Don’t let that bit about heartbreaking worry you, there is an HEA for our hero and heroine. But some of what they have to go through to get there, and what the Black community of post-Civil War New Orleans – and in the rest of the country –  had to experience both before and after Freedom, that is frequently heartbreaking, all the more so because it doesn’t feel over.)

Rebel is a story on two levels, and it works excellently on both of them.

On one level, it’s a romance. On the other, complementary level, its historical fiction about the Black experience in Reconstruction era New Orleans in specific, and in U.S. in general during that period.

In the end, figuring out that they love each other is the easy part of their story. Working their way through and/or around the forces arrayed against them is the hard part. The combination of the two is what makes Rebel terrific – and terrifically readable – all the way around.

Escape Rating A+: Yes, I know I’m squeeing. This was a book that I just loved, even though I often have difficulties with historical romance these days. Those difficulties occur because historical romance heroines have a high tightrope to walk, in that they both have to be women who have enough agency for me to identify with and be women who can at least plausibly fit into the time and place where their story is set.

Valinda succeeds because she has a tremendous amount of agency that springs directly out of her time, place and circumstances. While her disgusting father does his best/worst to clip the wings of her spirit, that he expects her to be meek and submissive is plausible for the time period.

That, as a Black woman in the late 19th century she feels both duty-bound and able to support herself and make her own living and give of her best for the betterment of her people feels equally plausible and downright likely. The world is not going to be handed to her, and she’s seen the results of submitting meekly to her father’s will in the lives of her mother and older sister. It’s all too easy for 21st century women to see themselves in her pride in her work and her ambitions.

That growing up in her family circumstances has left her with no belief in love makes perfect sense and fits her right into the company of many romantic heroines who learned early that their marriages would be business deals and not love matches. That the marriage her father wants for her is more vile than that puts him in the bad company of many fathers of romantic heroines. Valinda spends the book rightfully dreading his appearance in New Orleans, and he lives down to all of her fears.

But her hopes by that point have been placed in Drake LaVeg, a man who has grown up in a family filled with love, led by his strong, determined and successful mother. It’s Drake and his family who coax the real Valinda out from the restrictions her father placed around her.

At the same time, this book does its best to portray the circumstances under which Drake’s and Valinda’s community was forced to endure. The freedom granted by the Union victory in the Civil War was precious – and it was under attack by all sides at all times. Those attacks were often legal, governmental and bureaucratic. Even the illegal attacks were sanctioned by the government and the powers-that-be.

So much of the circumstances that surround and intrude upon the romance feel viscerally wrong and historically accurate at the same time. And should make readers reflect that not nearly as much has changed as we like to believe.

In the end, Rebel is a romance that provides a historically accurate setting that we don’t read about often enough, featuring a dashing hero, a heroine with intense agency, and a promise of more to come.

I can’t wait to meet the rest of the Women Who Dare! 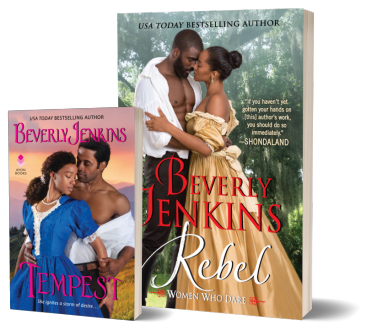 GIVEAWAY TERMS & CONDITIONS:  Open to US shipping addresses only. One winner will receive a paperback copy of Tempest by Beverly Jenkins. This giveaway is administered by Pure Textuality PR on behalf of Avon Books.  Giveaway ends 6/10/2019 @ 11:59pm EST.