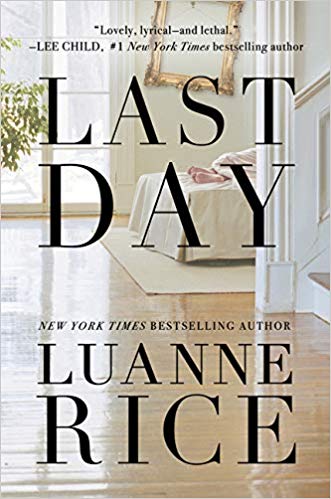 From celebrated New York Times bestselling author Luanne Rice comes a riveting story of a seaside community shaken by a violent crime and a tragic loss.

Years ago, Beth Lathrop and her sister Kate suffered what they thought would be the worst tragedy of their lives the night both the famous painting Moonlight and their mother were taken. The detective assigned to the case, Conor Reid, swore to protect the sisters from then on.

Beth moved on, throwing herself fully into the art world, running the family gallery, and raising a beautiful daughter with her husband Pete. Kate, instead, retreated into herself and took to the skies as a pilot, always on the run. When Beth is found strangled in her home, and Moonlight goes missing again, Detective Reid can’t help but feel a sense of déjà vu.

Reid immediately suspects Beth’s husband, whose affair is a poorly kept secret. He has an airtight alibi—but he also has a motive, and the evidence seems to point to him. Kate and Reid, along with the sisters’ closest childhood friends, struggle to make sense of Beth’s death, but they only find more questions: Who else would have wanted Beth dead? What’s the significance of Moonlight?

Twenty years ago, Reid vowed to protect Beth and Kate—and he’s failed. Now solving the case is turning into an obsession . . .

This is a story about lightning striking twice – and for the same reasons. It’s also a page-turner of a mystery combined with a story of friendship and sisterhood.

The story opens on Beth Lathrop’s last day. Or at least the last day when anyone who loved her woke up and believed that she was alive. But she isn’t.

Instead, Beth’s corpse is found in her bedroom, several days dead, by her sister and the local police. Those events would normally be the place where everyone’s nightmare begins, but it isn’t.

The nightmare began years ago, when thieves broke into their family’s art gallery and left Beth, her sister Kate, and their mother bound and gagged in the basement while they robbed the place. The girls spent 22 hours in that basement, tied to the body of their mother who choked to death on her gag.

Beth turned outward, her sister Kate turned inward, and the cop who rescued them still keeps tabs on them in the hopes of protecting them again.

But their first ordeal happened because their father betrayed them. It was his plan and his idea, and he’ll be paying the price for it for the rest of his life in prison.

Now tragedy has struck again. Beth is dead, Kate and the rest of her family and friends are lost in grief. But just as before, their peace has been shattered because someone in their inner circle betrayed Beth and betrayed them all.

The question is whether that same cop can figure out just who hides the evil behind a mask of grief.

Escape Rating B: Last Day was a compelling read. I think my feelings can be summed up by saying that it was good, and it was just on the edge of great – but didn’t quite get there, at least not for me. A couple of things made it fall just short of the mark.

The biggest thing that threw me off was that there are a few very brief chapters from Beth’s point of view, including the opening and closing chapters. She’s dead. Those chapters are weird, and they took me out of the story every time.

Beth’s contributions aside, the story itself is a page-turner. We see most of the action by following Kate, Beth’s older sister, and Conor Reid, the cop who found them all those years ago. Conor is now on the Major Case Team of the Connecticut Bureau of Investigation, and as soon as he learns of Beth’s death, he assigns himself to the case even though he knows he shouldn’t.

He also shouldn’t jump to conclusions, but he knows all of the principals of this case much better than any investigator should. And he wants the husband to be guilty of Beth’s murder.

Not that Pete Lathrop isn’t guilty of plenty of things, but murder may not be one of them. And Conor’s desire to punish Pete for all of the crap he put Beth through in life blinds him to the man’s lack of means, motives and opportunity to cause her death.

At the same time, Kate is left trying to make sense of it all, not just her sister’s death, but all of the secrets that made up her life that Kate knew nothing about. Somewhere among all the things that Beth hid from her sister but revealed to their best friends may lie the reason for her death. Or may just provide Kate with more reasons to grieve.

In the end, the truth is revealed not by dogged investigation, but by a little girl who is unable to let a lie stand, no matter who tries to gaslight her into believing the lie instead of the truth. The case is finally solved, and the perpetrator is revealed. And it is a betrayal, just as the truth of Beth’s and Kate’s mother was long ago.

But this time only Kate is left to pick up the pieces.

This was one where I didn’t figure out whodunnit at all. I wanted it to be the husband, but it felt too obvious so eventually I read the last chapter just to figure it out – and I was still plenty surprised. I think that, as much as I was riveted by the investigation and the unraveling of Beth’s life as well as the truth of her death, I found the ending a bit unsatisfactory. I’m glad that the murderer was uncovered, but I’m not sure I felt the catharsis I expected. The motives didn’t make complete sense.

Like the detective, I really wanted the husband to be guilty after all.

I’m giving away a copy of Last Day to one lucky US commenter on this tour!