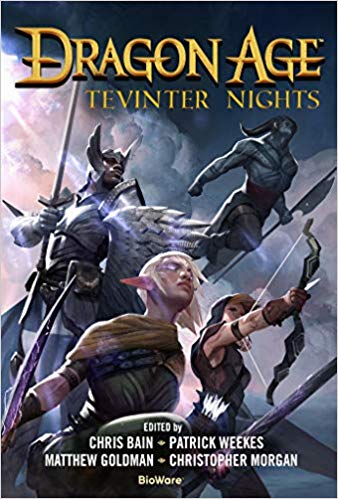 An anthology of original stories based on the dark fantasy, role-playing video game series from Bioware.

From the stoic Grey Wardens to the otherworldly Mortalitasi necromancers, from the proud Dalish elves to the underhanded Antivan Crow assassins, Dragon Age is filled with monsters, magic, and memorable characters making their way through dangerous world whose only constant is change.

If this is your jam, if Dragon Age is your jam, then Tevinter Nights is the jammiest jam that ever jammed. But I have to say upfront that if you’re not already into Thedas, this collection is not the place to get there. The place to begin is the awesome, absorbing videogame Dragon Age Origins, which premiered in 2009 and has, so far, spawned two sequels, the under regarded, boringly named but eminently playable Dragon Age II, and the later Dragon Age Inquisition. Those of us who love the series and replay it endlessly are now in year 6 of waiting for Dragon Age 4, which looks like it’s going to be titled The Dread Wolf Rises and not rise in real life until 2022 at the earliest.

I’m not sure whether the Tevinter Nights collection is designed as a teaser, as a hint of things to come, or just to drive us even crazier waiting. Whatever the case, for fans the collection is a terrific way of seeing parts of Thedas we have heard of but not seen much of – at least not yet – catch a few glimpses of beloved characters, and just generally have a good time in a place we’ve come to know and love. 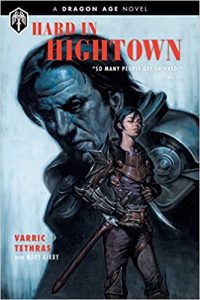 And the stories themselves, well, if you’re familiar with where they’re coming from, the collection is a rollicking good time. Maybe not all of the stories are quite worthy of a Tethras (Hard in Hightown) but a good time is certainly had by all, especially if you’re also into the sword and sorcery school of fantasy, because that’s where this collection mostly falls. With a couple of toe dips into the very dark fantasy edges of horror.

Dragging myself back from the squeeing to talk about the stories themselves, as I said, they are all pretty much playing in the sword and sorcery end of the fantasy pond, so there are lots of assassins, lots of dastardly plots and LOTS of murders. Then again, several of the stories feature the Antivan Crows, and assassination is their business.

The story I found to be the absolute most fun was Down Among the Dead Men by Sylvia Feketekuty. While part of that fun was that it is set in Nevarra, a place we haven’t been, and in the Grand Necropolis, under the purview of Nevarra’s Mortalitasi, the mages who maintain the Crypts and their dead and demonic denizens of whom we’ve heard much but not met many.

On the surface this story reads like a dungeon crawl into a dungeon full of creepy, crawly undead monsters, but it subverts itself in the end. The “I see dead people” is expected, the “I be dead people” is rather a shock for our guardsman hero. That he achieves his lifelong dream of becoming a librarian as a dead person turns the gallows humor into a smile.

The two stories that edge the closest to outright horror are the aptly named The Horror of Hormak by John Epler and The Wigmaker by Courtney Woods. While their portraits of previously unseen parts of Thedas are fascinating, it’s the evils faced by the protagonists that make both of these stories sing their creepy songs. It wouldn’t have taken much for either of these stories to be just plain horror in any setting, but Thedas gives both of them a bit of extra gruesome spice. That The Wigmaker can also be read as a scathing commentary on the real-life fashion industry just adds to the chills it engenders.

The two stories that dealt most directly with characters that fans are familiar with from the series are Callback and Genitivi Dies in the End, both by Lukas Kristjanson. Both of his stories rely on readers’ knowledge of the series, and both take that knowledge and use it to tell stories that pull the reader right back into this beloved world while telling new stories with old friends. Callback is a particularly poignant post-Inquisition story, while the story around Genitivi, while “enhanced” by knowing the character and the world, is actually a well-done version of an often told type of story, one about storytellers and storytelling and the way that so-called history can be embellished – or not – as the tale-teller decides. Or as the tale-teller requires in order to get out of town with a whole skin.

Last, but not least, the one that sent chills up my spine not for its creepy or horrific elements but for the way that it continues the post-Inquisition story by giving us a view of exactly what the Dread Wolf has been up to since the end of Dragon Age Inquisition. The final end of the Trespasser DLC when he announced that he planned to essentially destroy the world in order to save his own people and correct the wrong he committed Ages ago. He’s just as proud, self-deluded and self-serving as ever, and just as hot and just as cold, all at the same time. I can’t help but hope that his original name might be prophetic in some way. And that this time “Pride” will go before a very big fall. He certainly has the hubris for it.

We’ll see. Eventually. In 2022 or 2023. Not nearly soon enough. But if you love epic fantasy of the somewhat grimdark persuasion, enjoy experiencing a story through videogaming, and have not yet had the pleasure of going to Thedas, you have plenty of time to work your way through the entire series before The Dread Wolf Rises.

If you have already fallen in love with Thedas as I have, we have these stories to tease us and tide us over.