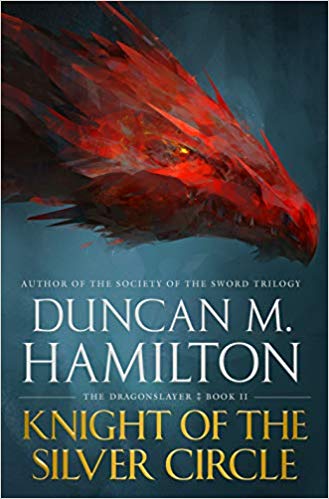 *AUTHOR OF ONE OF BUZZFEED'S GREATEST FANTASY BOOKS OF 2013*From the author of the beloved Society of Sword and Wolf of the North trilogies, Duncan M. Hamilton's Knight
of the Silver Circle

Three dragons wreak havoc throughout Mirabay--eating livestock, killing humans, and burning entire villages to ash. It was nearly impossible to kill one, using a legendary sword and the magic of the mysterious Cup; to tackle three, Guillot dal Villerauvais will need help.

The mage Solène fears having to kill again; she leaves Gill to gain greater control over her magic.

The Prince Bishop still wants Gill dead, but more than that, he wants the Cup, and he'll do whatever he has to to get it, even sending his own daughter--a talented thief and assassin--into the dragons' path.

As secrets mount on secrets and betrayals on betrayals, both Guillot and Solène face critical decisions that will settle not only their own fate but that of all Mirabaya.

The Dragonslayer Trilogy: 1. Dragonslayer2. Knight of the Silver Circle3. Servant of the Crown 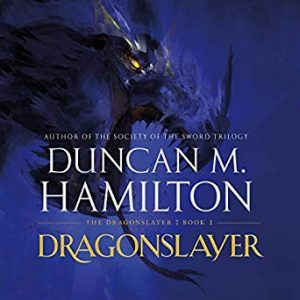 I want to call Guillot dal Villerauvais an antihero, because if there’s one thing the man does not want to be, it’s a hero. He’s been there and done that and knows, for sure, for certain and for true, that the so-called glory is empty. As tempting as the adulation still is, he’s all too aware that it’s a cup of poison.

And so much of his personal behavior since he left the capital in disgrace five years ago has been, well, let’s call it less than heroic that it feels wrong for him to accept any of it. He knows he has plenty to atone for – and that killing the dragon that destroyed his village is just a drop in a very large bucket.

But now that he’s needed, truly needed – and feels guilty as hell about why he’s needed even though it isn’t his fault – he’s there. On the front line. In front of the damn dragon. Or in this book, dragons, plural.

Once Gill learns that the dragon he killed wasn’t the only one left in the world after all, he sets out to kill the not one but three that seem to have followed in its wake. After all, he’s the only “experienced” dragonslayer in Mirabaya – or anywhere else – in more than a thousand years.

But without the help of his unsung assistant, the sorceress Solène. Solène unlocked the secrets that gave the original Knights of the Silver Circle their power. Solène can’t control her magic – to the point where that lack of control will kill her.

So she leaves Gill with the magical cup, the words to say, and a hope and a prayer that it will be enough to see him through.

While the Prince Bishop plots back in the capital to steal the glory that Gill has no use for, the cup that makes it all possible, and the kingdom if he can manage it.

He almost certainly can. He’ll just need a little bit of magic – along with a ruthless desire to let nothing stand in his way. Not even the king he’s supposed to serve.

Escape Rating A+: So far, this series has turned out to be a joy and a delight. I loved Dragonslayer, to the point where I couldn’t stand to wait for the utterly marvelous audiobook to play out and switched to the ebook just to see what happened that much faster. As I did this time around, switching from audio to text at about the 40% mark.

It’s obvious that I have no more patience waiting to see how a good book tells its story than the Prince Bishop does waiting for all of his many, many plans to ripen to fruition.

Like the first book in the series, this second book tells its rather epic story in a relatively short number of pages while keeping its large scope. At the same time, it hews to its sword and sorcery roots by switching perspectives from the swordsman Gill to the burgeoning sorceress Solène to the power-hungry politician Amaury with all the aplomb of the ablest swashbuckler.

But the washed-up, wasted, struggling Gill is the true hero and the true focus. Solène has her own story, but a big part of our interest in her revolves around her aid to Gill. And Amaury, well, Amaury is the villain and nemesis that every good hero needs. Smart, politically savvy, utterly ruthless and completely without remorse.

A big part of this entry in the series, which is a middle book that manages totally NOT to feel like one, is on the dragon hunt. Several of them, appropriately, as there are not one but three dragons this time around. There’s plenty of glory to be had, and plenty of men looking to grab it. That they are underprepared and less than successful is no surprise but adds plenty of drama and action to the story. 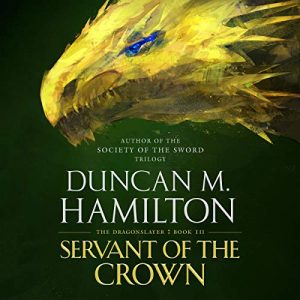 At the same time, there’s an underlying truth to this part of the saga that reminds me in a very peculiar way of Star Trek IV: The Voyage Home. If you’re not familiar, that’s the one with the whales. And Mirabaya or at least its Prince Bishop, like the Earth of that movie, is about to discover that the thing that can save them is the thing that they’ve been so successful at destroying.

The ways in which that destruction will bite someone, or several someones, in the ass will be revealed in the final book in the trilogy, Servant of the Crown. Which I can’t wait to start in the morning.

One thought on “Review: Knight of the Silver Circle by Duncan M. Hamilton”