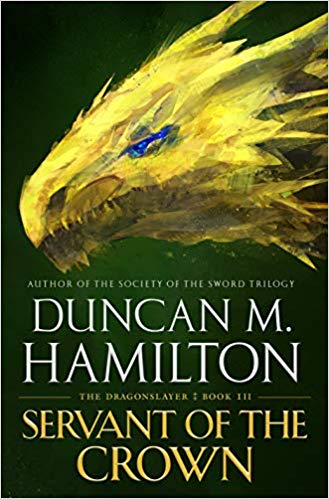 The Exciting Conclusion to the Dragonslayer Trilogy Long laid plans finally bear fruit, but will it prove as sweet as hoped for? With the king on his deathbed, the power Amaury has sought for so long is finally in his grasp.

As opposition gathers from unexpected places, dragonkind fights for survival and a long-awaited reckoning grows close.

Soléne masters her magic, but questions the demands the world will make of her. Unable to say no when the call of duty comes, Gill realizes that the life he had given up on has not given up on him.

1. Dragonslayer
2. Knight of the Silver Circle
3. Servant of the Crown 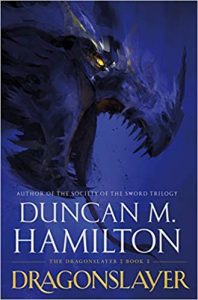 First things first. I just want to say what a treat it was to start a series, fall in love with it, and be able to just read – or be read to – all the way through to the end without having to wait months if not years for the later books in a series. I don’t always have that opportunity, either because I fall in love with the first book long before the others are out, or because I run into the “so many books, so little time” conundrum and have to space things out because of other reading commitments. Because I waited to start the first book (Dragonslayer) until the entire series was out – a happy accident! – I was able to do the whole thing in one swell foop. And wow! What a ride!

Second, this is epic fantasy of the sword and sorcery school, and there just hasn’t been as much of that around recently. I’d forgotten how much I love this end of the epic fantasy pool, so I’m grateful for the reminder and will be looking for more of it.

Third, this story manages to be both epic and not epically long at the same time in a way that just really, really works. In an era when so many epic fantasies are made up of several individual door-stop sized books, it was a joy to get such a rich and complete story in a length (or maybe I should reckon this as height) of just under one doorstop at 1,000 pages in total.

Fourth, but still not last, what makes this series so fascinating to read are its characters, and the way that their individual arcs both fulfill fantasy tropes and subvert them at the same time. Because this is a story where the characters feel like real, flawed human beings – and yet they still manage to be Big Damn Heroes, whether they want to be or not. And it’s definitely not.

I’m specifically referring to Gill and Soléne, because their respective journeys, separately and together-but-not-TOGETHER, form the backbone of the series.

Gill is the failed hero of the previous generation. His character, who is very much a classic archetype, usually becomes the mentor figure in most epic stories, whether fantasy or not, and that character usually dies somewhere in the middle so the “real” hero can take center stage. (One of my personal favorite characters of this type is actually dead to begin with, but that’s another story.)

Obi-Wan Kenobi is a great example. He was a hero in the previous war. He failed, he fell and then he hid himself away in the deserts of Tatooine. He becomes Luke’s first trainer and mentor in the Force, and then he’s killed by Vader. The mentor figure always dies. Like Merlin. And Dumbledore. And every other teacher/trainer of the young hero.

But the young hero in the Dragonslayer series is on an entirely different course than Gill’s. Because Gill doesn’t die. Instead, he becomes the hero, one more time, in spite of his own wishes to die in obscurity at the bottom of a bottle. He is, in the end, the “Servant of the Crown” as named in the title of this final volume. He serves no matter what he, himself might want. And he becomes the hero because no matter how many times he’s struck down, he gets up and tries again. And again. And again. Until the job is done.

If it ever will be. 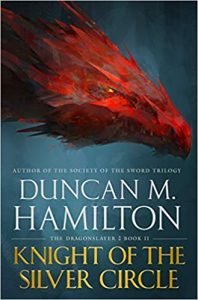 Soléne is that young hero. Gill’s the one out in front to collect all the glory and fight all the battles, or so it seems. But she’s every bit the hero that he is, just from behind the scenes. Her power is huge, but it is also quiet. She’s the mage who operates in the shadows, not because she’s the woman inspiring the hero, but because the power she wields works best from the dark – and the quiet. He knows that she brought him the victory, and he knows that the best thing he can do for her is to acknowledge that privately and not publicly. Not that the Crown won’t give her its own semi-public acknowledgements. Maybe. If they succeed.

It is fascinating that both of their personal journeys are the journey to learn to trust themselves. He has to step up, and she has to step forward, but in so many ways it’s the same step.

I also absolutely adored that there is no romance here – nor should there be. It is wonderful to see trust, friendship and true comradeship in a relationship between a man and a woman that has absolutely no basis in will they/won’t they. Because this particular pair really, really shouldn’t – at least not with each other – and the reader is NEVER led to believe that they should. Solene is never Gill’s reward or his prize, nor is she ever fridged. She’s as big a damn hero as he is, just in a different way.

Even Amaury the villain is very, very human. While he is certainly a meditation on the cliche that power corrupts and absolute power corrupts absolutely, he’s never able to grasp the absolute power he thinks he deserves. And the minute he gets close to it, it does him in. But throughout he’s human and understandable, even if he’s never a sympathetic character at all. And it’s another subversion of trope that Amaury the human is the big villain, while the really big creatures we think will be the villains, those dragons of the series title, actually aren’t. Well, at least all of them aren’t.

Escape Rating A++: I need to stop squeeing at this point. It’s pretty obvious that I adored this series from beginning to end. I began it in audio – every time – but switched to text at the point where I just couldn’t find out what happened next nearly fast enough.

I will say that the reader for all three books, Simon Vance, was absolutely marvelous. I wanted to continue to listen to him, but patience has never been my long suit. If you love fantasy and have an excuse to listen to the full story, it’s a wonderful listen.

I loved this series so much that I decided to include it as one of my Blogo-Birthday Celebration Week reviews and giveaways. The winner of today’s giveaway will receive their choice of one book by Duncan M. Hamilton (up to $20 US), whether in this series or one of his previous series (and if anyone knows whether they are all set in this same world, please let me know!)

11 thoughts on “Review: Servant of the Crown by Duncan M. Hamilton + Giveaway”