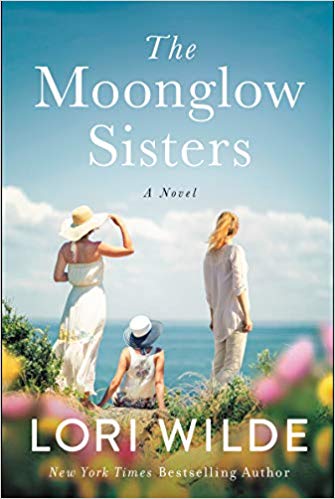 It’s Jill Shalvis meets Susan Mallery in this gorgeous novel by New York Times bestselling author Lori Wilde about three sisters, one small town, a wedding, and the summer that changes everything.

Welcome to Moonglow Cove, Texas, a place where your neighbors know your name and the gentle waves of the Gulf of Mexico lap lazily against the sands. It’s a magical spot, especially in the summertime…

Once the town was the home of the Clark sisters—brought up by their grandmother at the Moonglow Inn. Nicknamed “The Moonglow Sisters”, as children they were inseparable.  Then, a wedding-day betrayal tore them apart and they scattered across the globe and away from each other.  But the sisters have at last come home…

There’s Maddie: smart, sensible, and stubborn. Shelley, who ran off to find her bliss. And Gia, a free-spirit determined to keep the peace. It’s her impending wedding that keeps them together…but Gia has a secret, and when her sisters find out all heck is going to break loose!

This is a story that invokes ALL the feels. Seriously. All of them.

By that I mean that this story of sisterhood, family ties, family love, family secrets and especially long-held family grudges swings from grief to anger to joy and back around again as the Moonglow sisters come home, but not together, to take care of their beloved Grammy – but seem to have no intention of taking much care – or paying much attention to – each other.

Once upon a time the Moonglow sisters, take-charge Madison, peacemaker Gia and impetuous Shelley, were the darlings of not just their grandmother and her best friend Darynda but the entire town of Moonglow Texas.

At least until five years ago, when Madison caught Shelley kissing Madison’s fiance on Madison’s wedding day, and the sisters broke apart on the rocks of anger, jealousy and disappointment with each other’s lives and choices.

Madison left for New York City and is now a reality-TV star with her own hit cable TV show about making a beautiful home. Something that she herself lacks, as her controlling nature has pushed away not just her family but also the fiancee with whom she shared a terrible loss.

Shelley disappeared to Costa Rica and her sisters have not heard a thing from her in those same five years. Grammy knows where Shelley is, but there doesn’t seem to be much communication there, either.

Gia turned her passion for kite-making into an apprenticeship with a master kite-maker in Japan, and has returned to Moonglow to open her own business, making and selling artisan kites.

Gia, living in Moonglow, is the one who arrives at Grammy’s for their regular weekly brunch to discover that Grammy has left a note for her, asking Gia to get her sisters back together in Moonglow, to fix their fractured family and finish the “Wedding Ring” quilt that was supposed to have been a present for Madison for that dramatically cancelled wedding.

The note makes it clear that the message may very well embody Grammy’s last wishes. As Gia reads the devastating message, Grammy is in surgery. She has stage 4 brain cancer, and the surgery is intended to remove as much of the cancer as possible to slow down its growth. This won’t make her well, but it may give her more time. It may also kill her or leave her a vegetable for whatever time she has left.

Gia treats Grammy’s message as a mission, as Grammy intended. She gets Madison back to Moonglow, and reaches out to Shelley. Madison comes home looking like a million-dollar New York TV star. Shelley blows in worn-out and haunted, with a backpack containing all her possessions, no cell phone and a $200 taxi fare to pay.

It is not an auspicious start for any of the things that Gia thinks she has to accomplish. It’s not exactly an auspicious middle, either, as Grammy remains in a coma after surgery and Madison and Shelley both threaten to leave. It takes a whopper of a tall tale to get them to stay – at least until they discover they have an entirely different mission to carry out.

It’s going to take a village, the entire little town of Moonglow, to take care of Grammy, save her house, and put the Moonglow sisters back together. And it’s touch and go every step of the way.

Escape Rating B+: This one definitely invokes all the feels from beginning to end. It all starts with Grammy writing that message, knowing that she’s just placed a nearly – but not totally impossible burden on Gia. And not knowing that she’s leaving behind as big of a mess as she actually is.

The family dynamic is so fractured that at first it looks like there’s no fixing it. And all of those fractures were created by a whole bunch of family secrets. The sisters don’t know why their mother stopped speaking to their grandmother, and none of them seem to know exactly what was motivating the others during the wedding debacle.

And then there’s the current set of secrets, all brand new and all created post-family feud.

One of the interesting parts of their dynamic is the way that they don’t fit the usual birth order stereotypes. Oldest sister Madison is plenty take-charge and controlling, but middle sister Shelley is the wild child and youngest Gia is the peacemaker instead of the other way around.

But it’s the way that they pull together while falling apart that carries the story. Even though they don’t figure out the darkness that’s at the heart of their fracture until the very end, they still manage to take care of everything that needs to be taken care of, including each other, in spite of everything that’s wrong between them.

In the end, it was intensely cathartic to see Gia finally break. Because her breaking let all the secrets out, and the healing is stronger, a real fix and not just a temporary patch job over everything that had gone wrong.

I also perversely loved that the ending is bittersweet. The sisters can repair the damage to their relationship, they can finally learn and understand what went wrong between their mother and their grandmother, and that reveal allows Grammy to live her own truth for her remaining time. But that time is sadly, appropriately short. Time may heal many wounds, but it cannot heal brain cancer.

At the same time, she’s content with her ending, that she accomplished what she intended to, and got her girls back together before it was too late.

2 thoughts on “Review: The Moonglow Sisters by Lori Wilde”