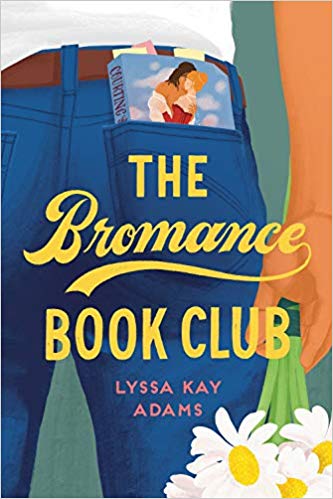 The first rule of book club: You don't talk about book club.

Nashville Legends second baseman Gavin Scott's marriage is in major league trouble. He’s recently discovered a humiliating secret: his wife Thea has always faked the Big O. When he loses his cool at the revelation, it’s the final straw on their already strained relationship. Thea asks for a divorce, and Gavin realizes he’s let his pride and fear get the better of him.

Welcome to the Bromance Book Club.

Distraught and desperate, Gavin finds help from an unlikely source: a secret romance book club made up of Nashville's top alpha men. With the help of their current read, a steamy Regency titled Courting the Countess, the guys coach Gavin on saving his marriage. But it'll take a lot more than flowery words and grand gestures for this hapless Romeo to find his inner hero and win back the trust of his wife.

I was looking for something light, fluffy and fun, and remembered this was in the TBR pile. It got a lot of terrific buzz when it came out last year, and it felt like it was high time to see what all the fuss was about. After all, this is a GREAT time for fluffy.

All of that buzz was right. Absolutely right. This was marvelous and lovely and fun. But not as fluffy as I expected, and I mean that in the BEST way possible.

The romance is one that doesn’t get done nearly enough – and it definitely should. Because as the story begins, Gavin and Thea are not only already married, they’ve been married for three years and have twin daughters. This should be well into their HEA. But right at the moment, it definitely isn’t.

Nobody’s happy at the moment. Even the little girls know that something is not right between mommy and daddy.

What makes this story work is that Gavin and Thea are in the mid-20s. They married young. They married because Thea was pregnant with the twins. They married while very much in love, but not really knowing nearly enough about each other. And people change a lot in their 20s, a lot when they become parents, and in Gavin’s case, a lot when they get their big break and move up from Major League Baseball’s minor leagues to the “Bigs”.

Life changed. Life changed a LOT. With Gavin on the road all season, and Thea left to cope with two daughters she adores, a husband who is never home, and a life she had not planned on. A life that suddenly bears entirely too much resemblance to the life her mother got trapped in. A life that Thea wanted to avoid at all costs – but didn’t.

Thea coped by trying to blend into the group of WAGs, that’s Wives and Girlfriends, of the Nashville Legends. Trying to be the best and most organized wife and mom she can be – while putting her own dreams on indefinite hold.

And by faking the fact that she’s miserable and lonely and trying to pretend that everything is all right – until it isn’t. When Gavin finally pays attention enough to figure out that she’s been faking a whole lot of their married life – both in and out of bed – the situation explodes, their marriage implodes, and talk of divorce is in the air.

A divorce that Gavin doesn’t want. He loves Thea, he loves his daughters, he loves the life he thought they had. He wants it all back – and he’ll do anything to get it.

And that’s where the Bromance Book Club comes in.

Because in his hour of pretty much darkest need, Gavin discovers that he’s not alone. That a whole lot of the guys on his team have been in something like the place he is, and that they’ve all found a way out.

By banding together. By supporting each other and giving each other advice about relationships. Advice that they have all garnered by reading, discussing and analyzing romance novels.

The first rule of book club is that they don’t talk about book club. But they do talk IN book club. A lot. And to the point. Not just the point about relationships but also the points about feminism and agency and the toxic patriarchy and all of the things that make living while female so much more difficult than any of them ever imagined.

The best part of the story – this isn’t about Gavin picking up a few moves or learning to manipulate Thea or any of that. It’s about him figuring out his part of what went wrong. It’s about learning what’s holding BOTH of them back.

It’s learning that love both is, and is not, enough.

Escape Rating A+: The Bromance Book lived up to every bit of last year’s buzz. It’s a terrific romance AND a marvelous story about relationships at the same time. So if you’re looking for a book to really pick you up and make you smile, The Bromance Book Club is a winner.

First there’s the romance. We just don’t have nearly enough romance books about existing relationships. Everything is about the rush of falling in love and finding that HEA. But real life is that we find it and we go through dark patches and we lose it and sometimes we recapture it and sometimes we give it up – or just give up. The issues between Gavin and Thea feel real, and so do they.

But there’s also plenty in this one about friendship, sisterhood and brotherhood. Thea’s relationship with her sister Liv is supportive in so many ways. They are so good for each other when the chips are down. At the same time, Liv is conflicted when Thea’s life gets better, both fearing that there’s no place for her in that life, and fearing that Thea is recreating patterns from their family’s less-than-stellar past and that she’s only going to get hurt again.

At the same time, there’s also the story of the brotherhood of the Bromance Book Club. In a sense, their story is also that of an existing relationship, and we also come into it in the middle. All of the guys are Major League Baseball players. They are all alpha males who could have been, and in some cases undoubtedly will be later, the heroes of their own romances. And yet, they all admit to being vulnerable, they all buy into the idea that they don’t know it all and can’t solve it all on their own, and they get together to help each other. 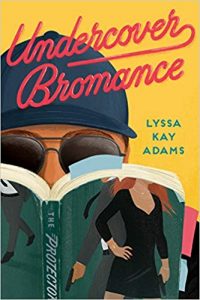 The book club, and the romances they read, are not played for laughs. There are some laughs, but then romance novels can be funny. But there is also fascinating, interesting and serious stuff between those pages, and the guys do some equally serious textual analysis of what is really happening in those stories and why they work. It’s never about manipulation, it’s always about learning and growing.

The Bromance Book Club is a winner from beginning to end. I’m very, very much looking forward to reading the next book in the series, Undercover Bromance, the next time I need a reading pick-me-up!

One thought on “Review: The Bromance Book Club by Lyssa Kay Adams”