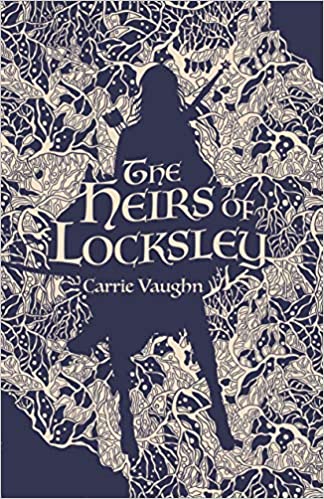 Carrie Vaughn follows up The Ghosts of Sherwood with the charming, fast-paced The Heirs of Locksley, continuing the story of Robin Hood's children.

"We will hold an archery contest. A simple affair, all in fun, on the tournament grounds. Tomorrow. We will see you there."

The latest civil war in England has come and gone, King John is dead, and the nobility of England gathers to see the coronation of his son, thirteen year old King Henry III.

The new king is at the center of political rivalries and power struggles, but John of Locksley―son of the legendary Robin Hood and Lady Marian―only sees a lonely boy in need of friends. John and his sisters succeed in befriending Henry, while also inadvertently uncovering a political plot, saving a man's life, and carrying out daring escapes.

All in a day's work for the Locksley children...

I picked this up, admittedly rather early, because it combines two of my great reading loves, English history and fanfiction. And I really, truly was NOT expecting the second part of that equation.

I fell in love with English history at age 12, after seeing the movie Anne of a Thousand Days. I have no idea what drew me in so strongly. Certainly not any direct relationship to the history portrayed as I have zero English ancestry. Whether it was the pageantry, the politics or the power, I was absolutely hooked, leading to a life-long interest in British history, whether fictionalized or not.

Not that some of what grabbed me, like the Robin Hood and King Arthur, aren’t of dubious historical accuracy – at best.

But this particular novella duology – at least it’s a duology so far – does a terrific job of setting Robin Hood, Robin of Locksley, into a reasonably historical version of the time in which he was supposed to have lived, and skirts around the issues of exactly which, if any, of the tales about him might be true by making him a secondary character in these stories.

In these stories, Robin is no longer the outlaw of Sherwood. And he’s no longer a young man. Instead, he’s well into middle age, still powerful, still feared and hated and loved in equal measure, but also someone who recognizes that his time will inevitably draw to a close, sooner rather than later.

These stories focus on his children with Marian; his oldest daughter Mary, his son and heir John, and his slightly fey child Eleanor as they take their first steps into adulthood. 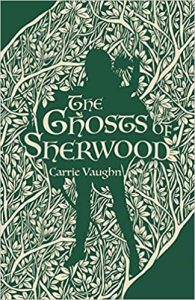 They also do a good job of giving bits of long-ago English history a face that makes them still feel relevant. The first book, The Ghosts of Sherwood, was a story about reckoning. About the nobles who favored King John still trying to eliminate Robin as a threat or a power, while the political maneuvering brought the negotiations surrounding the Magna Carta becomes personalized through his enemies attempt to kidnap his children – and his children manage to rescue themselves using the lessons their father and life on the edge of Sherwood have taught them.

In The Heirs of Locksley, the times have changed and the story has moved on a bit. It is 1220, and King John is dead. His 13-year-old son sits uneasily on the throne that he will occupy for the rest of his life. But Henry of Winchester, Henry III, is still a boy. A boy who never knew his father, but still stands in his shadow. The shadow of a man who seems to have pissed off everyone he ever knew.

Robin’s son John knows all about standing in a father’s long shadow. The two boys make a surprising common cause that leads them on an adventure that neither expected – to the consternation of all of the adults that surround them.

Escape Rating A-: I said at the beginning that this combined my loves of English history and fanfiction. The setting of these tales is between two of my favorite historical mystery series, both set in England and both occurring at times of great upheavals in history – as this series does.

I’m speaking of the Brother Cadfael series, by the late Ellis Peters, set in Shrewsbury, English between 1135 and 1145, at a time when the country was in the midst of a civil war. This series was also one of the first historical mystery series I have read, and the foundation of the popularity of the genre to this day.

The other series is the Owen Archer series, set in York in the late 1300s during the events that would eventually lead to yet another civil war, the Wars of the Roses. Both of these series, like these Robin Hood stories, do a fantastic job of drawing the reader directly into their time and place while still managing to comment on either our own, the immutability of human nature, or both.

(And now I’m missing Owen and will be moving the latest book in that series all the way up the virtually towering TBR pile!)

But I also referred to the Robin Hood stories as fanfiction – as the author does in the afterword to this book. It’s a concept that now that I’ve seen it, I can’t un-see it – and it resonates.

After all, the Robin Hood stories that we all know today weren’t written down until the late 1400s at the very earliest, three centuries after the adventures they portray. And even then, those written stories were merely printed versions of oral traditions that had arisen during the interim, sometime between Robin’s own time and the invention of the printing press.

As part of an oral tradition, the stories that were printed were the ones that were remembered, whether because they were the best stories, the most memorable ones, were just told by particularly charismatic storytellers – or all of the above. There’s no historical canon version, just a lot of stories that center around a larger-than-life character and his band of outlaws as they rebelled against an unjust authority.

It’s a “Fix-it” fic where the heroes fight wrongs and make things better in the end, as occurs when Richard the Lionhearted returns to his kingdom and the evil Sheriff of Nottingham is forced to leave Robin and his gang alone. The story conveniently ends before King Richard is killed and John takes back over, this time for good – or ill.

The Robin Hood Stories series are a kind of “next generation” fanfic where the author takes the beloved characters and tells readers what happened after the happy ever after, moving the story to the literal next generation, the earlier heroes’ children.

So she’s right. Not just that these stories feel like fanfiction but that the original Robin Hood stories were too. Complete with the “so many variations that the original canon is obscured” problem. In my review of the first book I noted that there’s a trend towards retellings going on right now. The world has gone mad and we’re all looking for the comfort of stories we know and love, in variations that may hold a few surprises but ultimately lead back to the tales that we already know.

And that’s what these Robin Hood Stories have been so far for me. A lovely comfort read with an interesting view of a historical period that I enjoy, an ultimately a visit with some old and very dear friends.

I hope there will be more.

5 thoughts on “Review: The Heirs of Locksley by Carrie Vaughn”