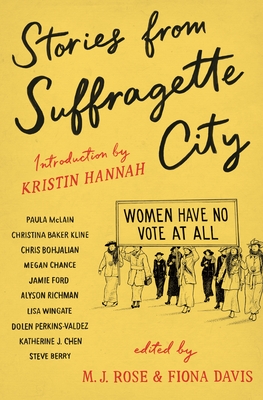 Forget, if you can, the David Bowie classic song, Suffragette City, because the song wasn’t about these suffragettes, in spite of the title. And in spite of the song being the first thing that popped into my head when I read the title. To the point where I have an earworm.

But this book is something entirely different.

On October 23, 1915, 105 years ago today, between 25,000 and 60,000 women marched through the streets of New York, in front of at least 100,000 spectators lining the streets, blocking traffic and generally grinding the entire metropolis to a screeching and sometimes cheering halt.

New York State was just about to vote on a referendum that would allow women the right to vote. The parade was intended to draw concentrated attention to the referendum, to provide a clear and incontrovertible testament that women were political and should be granted the right to vote.

Not all women agreed. And certainly not all men, who would be the ones doing the actual voting, for or against. As it turned out, mostly against. The referendum failed in 1915. It succeeded in 1917. The Nineteenth Amendment to the U.S. Constitution, whose centenary occurred earlier this year, gave all women the right to vote, even if it didn’t – and still doesn’t – mean that all women are actually able to vote.

Nevertheless, the October 23, 1915 parade was a watershed moment. And this collection of short stories that all take place on that day, within and surrounding that parade, tells the story of that moment and the women who were a part of it, through fictional perspectives from all sides, from the rich and famous – and occasionally infamous – Alva Vanderbilt Belmont to NAACP co-founder Ida B. Wells to Irish and Armenian immigrants to a young niece of the storied Tiffany family.

These are not any of their stories in their entirety. Rather, they are the stories of actions on that one, singular day, the thoughts, feelings and struggles that brought them to the parade, and the joy and occasional heartbreak that surrounded both its triumphs and its failures.

Escape Rating A-: It’s time to talk about the stories themselves.

This is one of those times when ALL the stories in the collection are just terrific. And that feels rare in collections. After all, not every style agrees with every reader. But this time, with its emphasis on this one day and all of the thoughts and feelings surrounding it, works. (If the concept of stories around a significant historical event appeals to you, Fall of Poppies, focusing on the cessation of the hostilities of World War I on the eleventh hour of the eleventh day of the eleventh month is also very lovely and well worth a read on this coming, or any other Veterans Day.)

Back to the stories. Although I will say that the differing perspectives that these stories focus on do lead the reader down plenty of mental and emotional byways. The day may have been singular, but the perspectives on it certainly were not. That’s what makes the collection as a whole so fascinating.

Many of the stories deal with women’s responses to the men in their lives who are either against the idea of women’s suffrage or just think that marching is unseemly and unsafe, and that women are delicate flowers that need protection from the dirty scrum that is politics.

Two of the particularly excellent stories on this topic are A First Step by M.J. Rose and Deeds Not Words by Steve Berry. A First Step also introduces the character of young Grace Tiffany, who flits through almost every story in the book. But in this first story about her, she and her aunt Katrina are planning to march in the parade, even though Grace’s uncle, Charles Tiffany, thinks it’s too dangerous and thinks he’s succeeded in convincing little Grace. He hasn’t. In the end, Grace convinces him.

There are also several stories that focus on the women who were, in one way or another, not welcome in this parade of mostly privileged white women. Ida B. Wells isn’t there. Rather, in Dolen Parkins-Valdez’ story, American Womanhood, Wells is in Chicago, speaking to a group of black women about the issues they face being subject to both racial prejudice and misogyny, expected to always do the most while receiving the least benefits. And as she speaks she remembers her own treatment at the Washington march in 1913, where the genteel southern ladies who had taken over control of the movement refused to let her or any other non-white women march with the main parade. And where Wells did it anyway.

The story that moved me the most was Just Politics by Chris Bohjalian. This story is an immigrant’s story, told from the point of view of Ani, an Armenian woman who has become a teacher in New York. But Ani came to New York during the years of the Armenian Genocide by the Turkish government just before World War I. Everyone around her tells her that the march is “just politics” but Ani has first hand experience of exactly how terrible and deadly “just politics” can become. Her perspective, that combination of hope with bitter, bitter experience, provides a leavening that makes her story just rise.

So, read this collection for its marvelous stories, and for its kaleidoscope of perspectives on what that day, the cause of women’s suffrage, and the cause of equal rights in general and not just the specific. And think about how many times that tide has risen and fallen and just how much is still left to fight for.

And then, if you have not already done so, go out and vote. It’s a right that was hard won, and it demands that we exercise it.