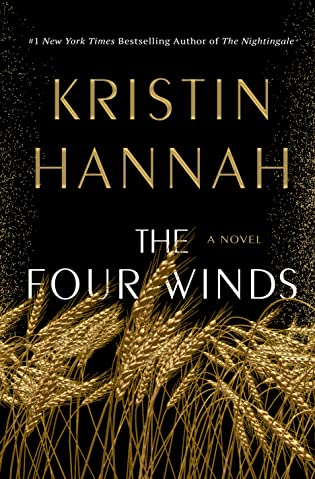 From the #1 New York Times bestselling author of The Nightingale and The Great Alone comes an epic novel of love and heroism and hope, set against the backdrop of one of America’s most defining eras—the Great Depression.
Texas, 1934. Millions are out of work and a drought has broken the Great Plains. Farmers are fighting to keep their land and their livelihoods as the crops are failing, the water is drying up, and dust threatens to bury them all. One of the darkest periods of the Great Depression, the Dust Bowl era, has arrived with a vengeance.
In this uncertain and dangerous time, Elsa Martinelli—like so many of her neighbors—must make an agonizing choice: fight for the land she loves or go west, to California, in search of a better life. The Four Winds is an indelible portrait of America and the American Dream, as seen through the eyes of one indomitable woman whose courage and sacrifice will come to define a generation.

Today is the Presidents Day Holiday in the U.S., so I went looking through the virtually towering TBR pile for something with an Americana theme. Which led me straight to The Four Winds by Kristin Hannah. While the Great Depression happened everywhere, the Dust Bowl feels like a distinctly American bit of history. At least this particular telling of it certainly is. Just as the topsoil of Texas and the Great Plains States blew east as far as Washington D.C., many of the people living in the former – and future – breadbasket of America blew west to California.

Like many of the people who went west, in that or any other era of American history, these former farmers – and doctors, lawyers, bankers and businessmen – and their families went west to make a better life for their families. Or at least a life where the very land that once sustained them wasn’t killing them with every breath.

The story, this era of devastation and loss, is seen through two women, Elsa (Elsinore) Wolcott Martinelli and her daughter Loreda. The story begins with Elsa, over-protected and under-loved, a 25-year-old woman who sees the life her upper-class parents have mapped out for her and wants none of it.

Elsa is no beauty, and she was diagnosed with a heart condition in her early teens. Her parents expect her to live the life of an invalid, doomed to spinsterhood and expected to sit quietly and self-effacingly in a corner, waiting until her parents become elderly and need her to take care of them.

Elsa wants a life for herself. One evening she goes out in secret and meets a man who is just as lonely and feels just as trapped as she does. In stolen moments together, she discovers love while he honestly just finds a temporary escape.

At least until the child they make changes all of their plans. And the dry years and the dust take away everything they ever dreamed of. It’s left up to Elsa to take her children somewhere that they might have a chance.

Or at least somewhere that the land itself won’t kill them – although there will be plenty of other things and people that just might do the same.

Escape Rating A-: I’m having a bit of a mixed feelings reaction to this book and in an unusual way. Those mixed feelings are because I recognize that this book is really, really good, while at the same time feeling like it’s not for me.

And I’m thinking that’s because for historical fiction, which it very much is, The Four Winds definitely borders on Literary Fiction which is generally not my jam. So I’m torn.

The alternative explanation is that the historical parts really drew me in, but the character of Elsa didn’t. On the one hand, she’s an indomitable spirit, surviving in a situation that would bring anyone to their knees – as it certainly does Elsa.

The difference is that Elsa doesn’t so much rise up until the very end as she puts her head down and keeps on keeping on for the sake of her children Loreda and Anthony. But she doesn’t so much exhibit courage or selflessness as she does a lack of self. She’s been beaten down her whole life and now she beats herself down whenever her situation isn’t doing a hard enough job at it.

I think that is where the story verges on Literary Fiction as she’s downtrodden internally even before she’s trodden down externally.

But the history wrapped into this is intensely compelling. It’s as though the author reached into the Dust Bowl Migration photographs by Dorothea Lange and just pulled out all of the emotion and backstory and poured it onto the page. If you’re not seeing the iconic image of the woman with her children as you’re reading this you need to take a good, hard look at Lange’s work because the images are still absolutely soul-searing 80-plus years later.

And those scorching is on every page of The Four Winds. Not just the despair of the land and the life blowing away – and into everyone’s lungs – in Texas, but the hate and derision on the face of so many Californians when they arrive. The inhumane treatment that Elsa and her children – and all of the other migrant workers – receive in California echoes through the years right up to the present and the way that immigrants are spoken about, written about and treated to this very day.

2 thoughts on “Review: The Four Winds by Kristin Hannah”